Electric vehicle fires are rare, but challenging to extinguish

The intense blazes can be exceedingly hard for fire departments to snuff out. Here's why. 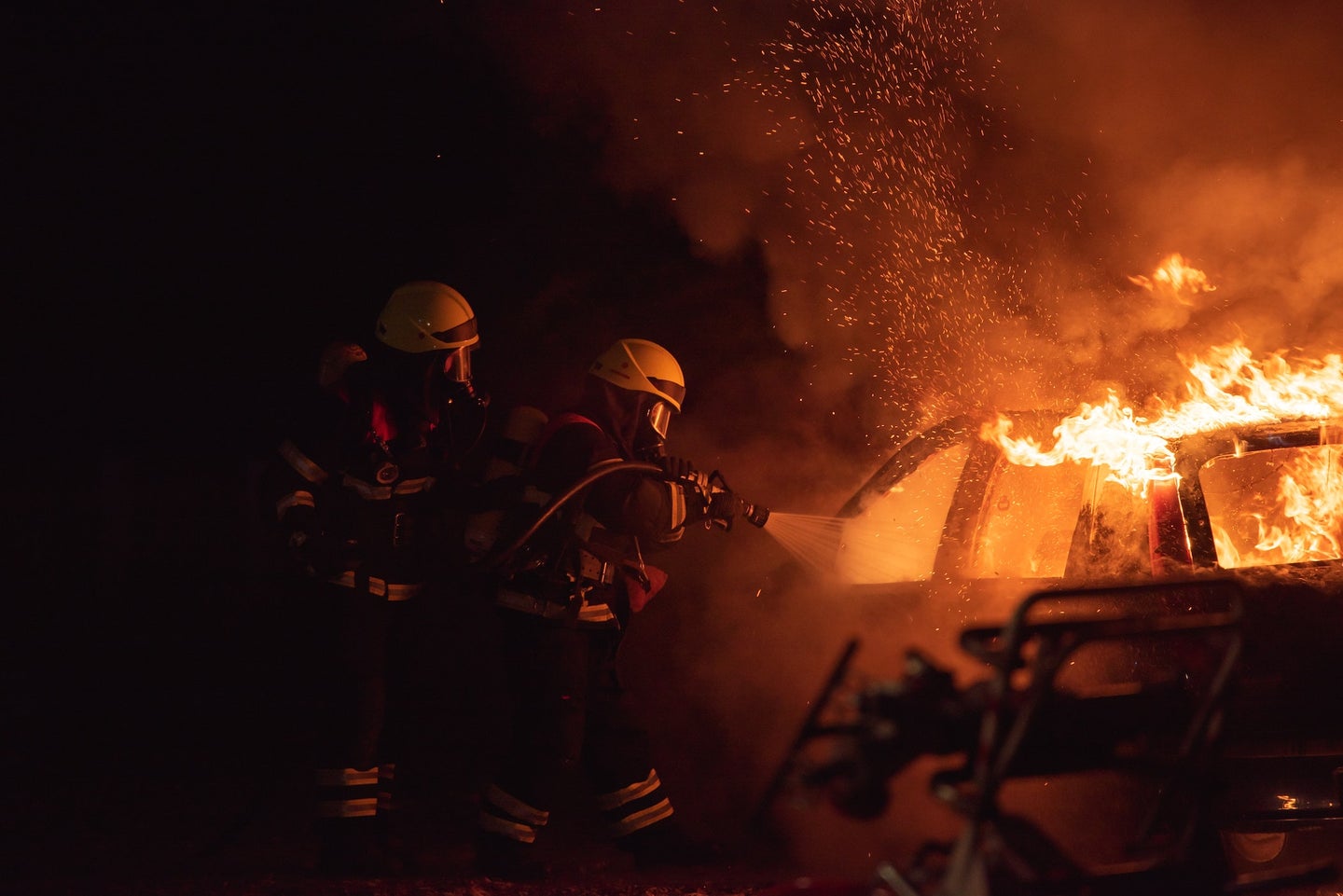 Stock images of a car fire and firefighters. Dominik Sostmann on Unsplash
SHARE

Around 11:30 p.m. on Saturday, April 17 near a Houston subdivision, a 2019 Tesla Model S jumped the road and collided with a tree. News reports focused on the fact that no one seemed to be behind the wheel of the car when it crashed. The bodies of two men were inside, one in the passenger seat and another in the rear seat of the vehicle, suggesting they had been using the car’s self-driving autopilot. But several reports noted another interesting fact: When first responders arrived and attempted to put the fire out, it kept reigniting, burning continuously for over four hours despite the use of nearly 30,000 gallons of water to extinguish it.

It’s long been known that the high-voltage, lithium-ion batteries used in electric vehicles can be dangerous. The fact is, nearly all lithium-ion batteries have the potential to explode or burn. Five years ago Samsung had to recall about a million of its new Galaxy Note 7 phones because some were overheating or catching fire. In 2016, Amazon was found to be selling faulty batteries that would on occasion catch fire as well. The problem with electric vehicle (EV) batteries, however, is that they contain a lot more stored energy than a battery in a cell phone.

“The battery in a Tesla is composed of a large number of individual cells,” says K.M. Abraham, a recently retired research professor at Northeastern University’s Center for Renewable Energy Technologies. “Under normal conditions they are safe. But if you short circuit a cell, the energy is released in a very short time. It was a pretty serious crash and thousands of cells were probably burned at the same time and that puts out a lot of heat.”

Electric vehicle batteries first gained national attention when a Chevrolet Volt caught fire three weeks after a routine crash test in May 2011. Scores of other cases have been reported since, with more than 40 fires reported in various Tesla models, particularly some of the earliest versions of the car.

In one case in Los Angeles in 2018, a Tesla Model S burst into flames while sitting in traffic on Santa Monica Boulevard, with fire erupting out of the wheel well. In a statement, Tesla called it an “extraordinarily unusual occurrence.”

Citing data from the US Federal Highway Administration, Tesla claims that gasoline-powered cars are about 11 times more likely to catch fire than one of its own cars. The company uses a metric of “fires per 1 billion miles driven” and says that for the period between 2012 to 2020, there has been about one vehicle fire for every 205 million miles traveled.

Experts agree that electric cars catch fire less often than gasoline-powered cars, but the duration and intensity of the fires due to the implementation of lithium-ion battery systems can make the fires in electric cars much harder to put out. “A lot of energy is stored inside an electric car battery, and it’s meant to be taken out in a very controlled way,” says Abraham. “When that doesn’t happen you can end up with a very combustible reaction. It’s like what happens in hell, if you can imagine what happens in hell.”

Abraham explained that water, if used sparingly, can actually exacerbate a lithium battery fire by acting as a conductor. What’s needed is either copious amounts of water or even powdered graphite, something most firehouses would not readily have on hand. A 2020 NTSB study suggested that U.S. firefighters need different techniques for EV battery fires and noted that few fire departments have trained their first responders to deal with them.

Tesla has released a first responders guide to help firefighters better confront battery fires in its vehicles, and its official guidance for the Model 3, for example, includes using “large amounts of water,” carbon dioxide, or “dry chemicals,” and it cautions against “the use of foam” [PDF, page 23].

[Related: Ralphie from ‘A Christmas Story’ could have been the first child in space. Then disaster struck.]

The battery in the Tesla Model S contains 7,104 lithium-ion battery cells in 16 modules. Each cell is made up of an anode, a cathode, a separator, and a liquid electrolyte. The anode and cathode store the lithium, and the electrolyte carries trillions of charged lithium ions back and forth through the separator. But the liquid electrolyte is flammable, and when a lithium-ion battery is exposed to extreme heat or is severely damaged following a crash, the result can be an internal short circuit, leading to a phenomenon known as a thermal runaway. That’s essentially an uncontrolled, cascading loop of violent chemical reactions that releases a tremendous amount of energy. According to a 2020 NTSB study of electric vehicle fires, most incidents are caused by the thermal runaway of a damaged battery.

In a damaged battery, “if you have a spark and some oxygen, it’s going to burn,” says Venkat Srinivasan, director of the Argonne Collaborative Center for Energy Storage Science (ACCESS) at the Argonne National Laboratory labs in Illinois. As the battery cells ignite and the thermal runway accelerates, the burning battery still has stored energy and can essentially create its own fuel, making it far harder to extinguish than a gasoline fire. “In gasoline, there’s one single reaction that occurs,” says Srinivasan. “In a battery, multiple steps take place, and it tends to take a long time to reach conclusion.”

An innovation that scientists say could revolutionize lithium batteries, rendering them nearly as safe as a AA in your flashlight, would be a solid-state electrolyte. One company that says it is developing such a battery is QuantumScape in Silicon Valley. However, the firm has been relentlessly secretive about its battery, releasing only limited data and no commercial product so far. Some remain skeptical that the technology will live up to its promise. “I cannot see how you can get the right kind of performance out of a solid-state electrolyte,” says Abraham.

Experts say that what’s needed is more research and testing to find better, less flammable materials, as well as new engineering breakthroughs that can reduce the rapid spread of a thermal runaway reaction. Because we are really only about a decade into the era of commercialized lithium-ion battery technology for electric vehicles, there is still a lot of room for improvement.

“Lithium-ion technology is still relatively new,” says Joshua Lamb, a principal investigator at Sandia National Laboratories’ Battery Abuse Testing Laboratory. “What we don’t have with battery technology is the 100-plus years of dealing with them to know exactly what the hazards are.”