A German car nicknamed “heavy drinker” or “boozer” has set a new record for electric vehicle stamina: 1,013 miles on... 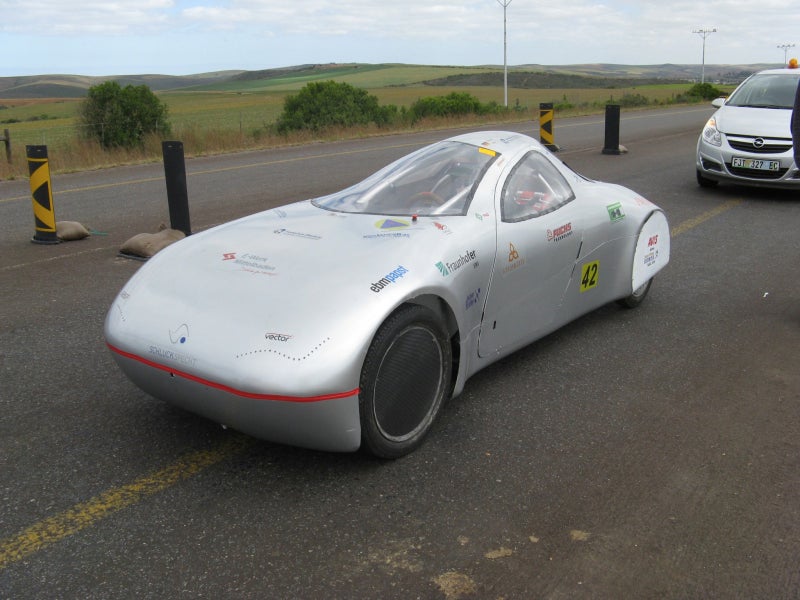 A German car nicknamed “heavy drinker” or “boozer” has set a new record for electric vehicle stamina: 1,013 miles on a single charge. The single-seat vehicle’s aerodynamic shape, with the motors integrated into the wheel hubs, helped the car accomplish this feat.

The bizarre-looking car took 36 hours and 12 minutes to complete its journey, driving around a text track at Bosch’s Boxburg Proving Ground in Boxburg, Germany.

The Schluckspecht E was developed at Germany’s University of Applied Sciences in Offenburg, in collaboration with other academic groups including the Fraunhofer Institute. The same team has been building car prototypes for more than a decade, and last year took a previous iteration of the Schluckspecht E for a 389-mile ride on South African streets.

The car gets its name from the team’s first car in 1998, which was too much of a gas guzzler to do very well in car competitions. Schluckspecht translates as “gobbler,” “heavy drinker” or “boozer” in colloquial German, according to the Austrian environmental news site Oekonews, which first reported the car’s success over the weekend.

The car only seats one person and is not exactly built for comfort, but its innovative design could be a new leap forward in EV performance. Instead of an internal engine and transmission, the car has two wheel-mounted hub motors, which the Schluckspecht team first developed five years ago. Several groups are developing production engines based on this design, Oekonews reports, including the University of Offenburg working with the firm Evomotiv.

Engineers at the Fraunhofer Institute for High-Speed Dynamics built the car’s featherweight chassis, designed especially for EVs. The car has 14 lithium-cobalt battery packs, providing 23 kilowatt hours of battery capacity. It moves at just 28 MPH, but the tradeoff is stamina — a major hurdle for electric vehicles in this country and Europe.

The Schluckspecht record beats a previous record of 623.23 miles in 27.5 hours, set by the Japan Electric Vehicle Club in May 2010. With that range — and frankly, with that terrific name — the car could have a bright future as an electric commuter vehicle. Now if they could make it just look normal.