Today’s cars may seem too sophisticated for tinkering, but the DIY auto movement is thriving, yielding designs and innovations too radical for mass production. Here are four awesome examples of modern garage-guy ingenuity.

The Rally Fighter from start-up Local Motors is a burly, menacing vehicle no major manufacturer would ever include in its standard lineup. With its 33-inch tires, 20 inches of suspension travel and rugged inner skeleton, the street-legal desert racer is too niche for mass production. But Local Motors knows that this beast is exactly what a small subset of buyers wants. How? Those buyers designed it.

The company was co-founded in 2007 by former Marine and Harvard Business School graduate Jay Rogers on the notion of combining the crowd-sourcing and DIY movements with staid auto manufacturing. Amateurs and professionals submit designs to Local Motors’s Web site, and users vote on the winners in a monthly contest. If, among other factors, a vehicle generates enough buzz that the company thinks it could sell at least 500 of them, the engineers fine-tune the design to make it feasible. Then Local Motors sets up a micro-factory—think automotive plant meets semi-pro DIY garage—where buyers build the car themselves under guidance from the company’s instructors for an estimated $50,000. “We’re not trying to make cars for soccer moms,” Rogers says. “We’re trying to make cars for people who are really deeply interested in automotives. Local Motors can bring these low-volume, highly desirable vehicles to market.” 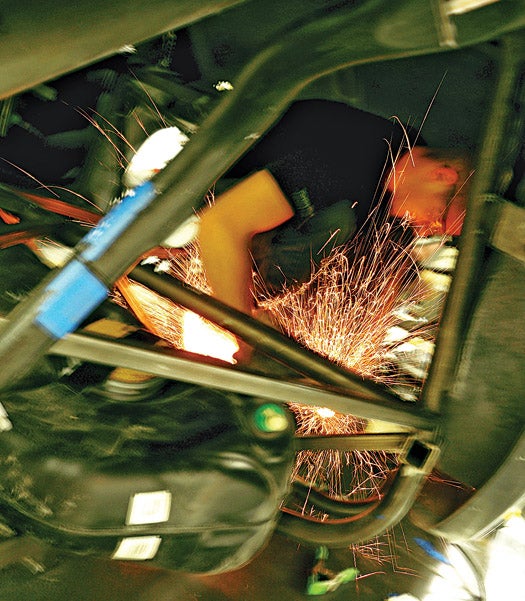 The Rally Fighter is the first to move from the site to the street. Local Motors has 77 orders for the car so far, and it plans to build them, appropriately, in the desert: Phoenix, Arizona. Contest winners have also included a Miami Roadster for speed lovers (which would be built in Miami) and a hydrogen vehicle designed for San Francisco.

Before builders show up, they will watch an instructional DVD at home: basic pre-training for the less handy. “They need to know the difference between a socket wrench and an Allen wrench,” Rogers says. Next, the customer will come in with up to two “build partners” for consecutive three-day weekends of work—roughly 60 hours in total. At the start, their Rally Fighter will simply be a welded chassis waiting for parts (pre-molded body panels will also be ready, but unmounted). Up to four groups of customers can be overseen by a single builder/trainer. Rogers describes these Local Motors employees as a mix of teacher, engineer and garage buddy—as he puts it, “personable folks who love sharing knowledge about cars.” 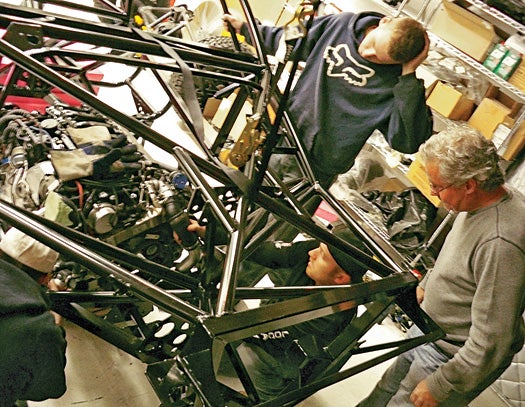 Customers get a set of tools and start assembling: front and rear axle and suspension first, then fuel tank and filler neck, the brake and accelerator pedals, the master brake cylinder and the brake lines. The builder/trainer monitors each step, making sure that the work is done properly, but he steps in only when necessary. Rogers says the work won’t require master-mechanic expertise. Customers will prep the engine—possibly a clean-diesel from either BMW or Mercedes—mount the engine, transmission and driveshaft, and install the radiator, hoses and fans. And this is just the halfway point. The Local Motors engineers will do some higher-skill work in the days between each customer’s session, and the next weekend will be a blur of finishing touches, including doors, wheels and tires, and setting the vehicle ride height and other adjustments. At the end of it all, the customer drives out in his very own desert racer. (The cars will be street-legal, but because they’re considered custom vehicles, they won’t need to pass National Highway Traffic Safety Administration crash tests.)

For someone like Jay Zuppardo, who has Rally Fighter No. 30 reserved, this sounds more like fun than work. He can’t wait to get inside the micro-factory and prep his Fighter for the desert. “I could go buy a Jeep or an FJ Cruiser, but it’s not going to do what the Rally Fighter is designed to do. I want that car,” he says, “and I want to get involved in what it takes to shove it down the line.”
local-motors.com 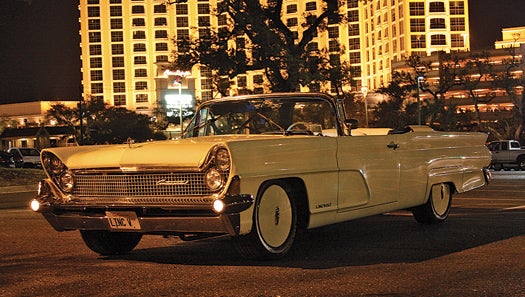 Three years ago, rock legend Neil Young drove his 1959 Lincoln Continental to the shop of Wichita, Kansas–based super-mechanic Johnathan Goodwin and asked him to turn it into a hybrid. Goodwin had already made a name for himself by converting Hummers and other trucks (including Arnold Schwarzenegger’s Jeep) to biodiesel and boosting fuel economy from 12 to around 25 miles per gallon. The result of that meeting, the Lincvolt, should be on the road this summer. (Young recently dedicated an album, “Fork in the Road,” to his new love.) A 150-kilowatt electric motor, powered by lithium-ion batteries, pushes the three-ton Lincoln down the road. But the real heart of the car is an engine under the hood that can run on biodiesel, diesel, ethanol or other fuels. When the batteries run low, that generator recharges them on the fly, so there’s no need to pull over and plug in. Goodwin estimates that the car will exceed 70 mpg.
lincvolt.com 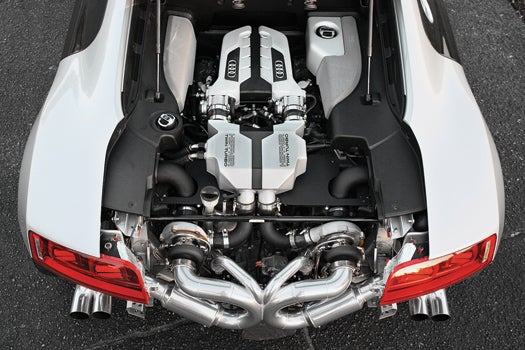 Adding horsepower to a modern computer-controlled car isn’t really a home-garage job anymore—today’s tuners have to be hackers. That’s where shops like Heffner Performance come in. Among other mods, the Sarasota, Florida, company alters customers’ cars to add more power. A recent project is a souped-up Audi R8. At 420 horsepower, the factory model falls a little short, according to company president Jason Heffner, so he and his team added twin turbos that boost horsepower to 625. “The trickiest part was sorting out the electronics,” he says. Ten years ago, he explains, the engine controller just ran the engine, but now the airbags, brakes, traction-control systems—they all communicate with one another. When you modify the engine, Heffner says, “all the aspects of the car need to work hand in hand.”
heffnersperformance.com 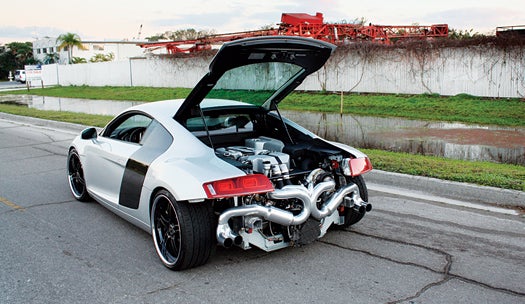 Stealing Australian Jonathan Oxer’s 2004 Mazda RX-8 would freak out any thief. That’s because Oxer can turn the engine on and off, lock and unlock the doors, check the car’s performance, and use GPS to track its progress on a Google map, all from a Web browser on a computer or smartphone. Oxer began his 18-month-long effort to boost his car’s intelligence because he hadn’t seen anyone else build a car-puter accessible 24/7, from anywhere in the world. He mounted a stripped-down computer in the trunk, ran USB cables through the car to connect the computer to the diagnostics system, soldered another connection to the stereo’s circuit board, and added 3G mobile broadband, which gave him online access and turned the car into a hotspot. Now he’s swapping the computer for a power-sipping microcontroller that should run for weeks and recharge when the car is running.
jon.oxer.com.au 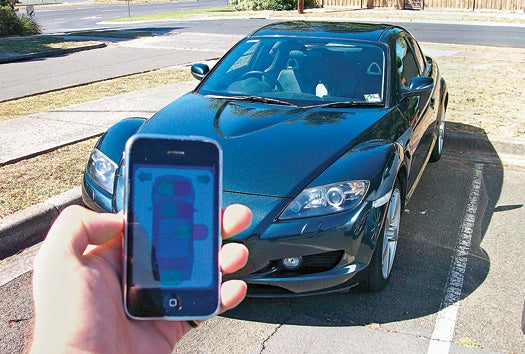 The in-car computer runs a web server with a secure management interface optimised for mobile devices such as iPhones and Android phones. It provides three different screens for Control, Telemetry, and Location.
Electric Vehicles
Vehicles