Harley-Davidson Has A Real LiveWire, Also Known As Its First Electric Motorcycle

Sun-tanned men and women in jeans and leather vests, many with bandanas and tattoos, cluster on the sidewalk. They are... 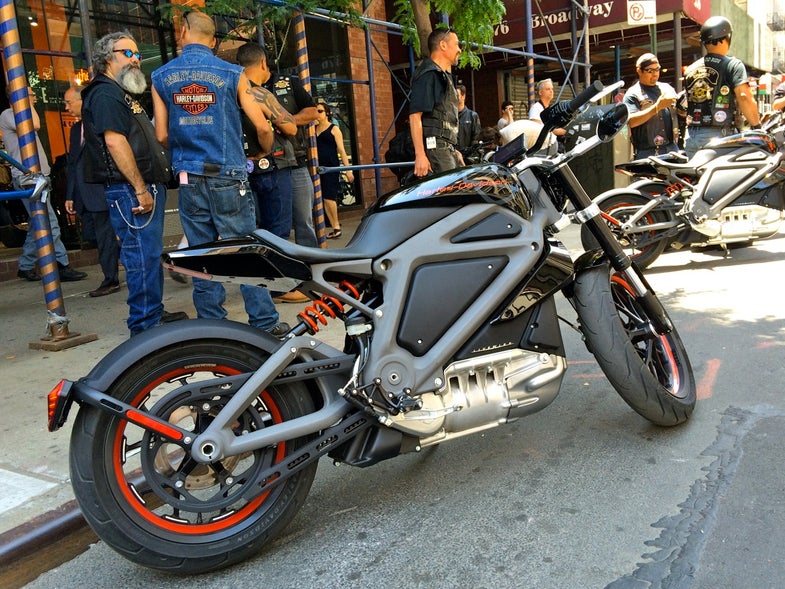 Sun-tanned men and women in jeans and leather vests, many with bandanas and tattoos, cluster on the sidewalk. They are standing before a row of shiny new Harleys leaning on kickstands outside a dealership in lower Manhattan.

But something is different about these Harleys. And there is an unusual air of excitement among the New York City Harley Owner’s Group—HOGs for short—as they hang out along busy Broadway this sunny Monday afternoon.

The HOGs and the Harleys draw a lot of attention from passersby. A skinny dude, black hair to his shoulders, bounds over to the row of motorcycles and exclaims, “This is an electric?! Holy sh*t!”

Harley-Davidson has stunned its passionate fans—and pretty much the rest of the motoring public—with a fully electric motorcycle called Project LiveWire. The new bike is a prototype that’s not available for sale.

But the handful of them parked outside Harley-Davidson of New York City are kicking off a cross-country tour that will continue into next year, as the iconic motorcycle manufacturer lets customers go for a ride and collects feedback on whether it should offer an electric bike like the LiveWire.

With its high-tech LED headlamp and cast aluminum frame finished in a gray rough texture, it looks nothing like a traditional Harley.

Though much more sonically subdued than a chugging Harley V-twin engine, the LiveWire’s 74-horsepower electric motor isn’t exactly quiet. It shrieks like a jet engine at wide-open throttle. (Check out the short video below to hear what it sounds like.)

“The sound that it’s producing is uniquely our own, very authentic and genuine,” says Jeff Richlen, chief engineer of the LiveWire. “It’s not fabricated or artificially simulated or anything along that line.”

As with all Harleys, the motor is a showpiece. It’s not hidden like on some other electric bikes, such as the Zero S, for example. The clutch-less electric motor with its polished aluminum housing looks like a metal sculpture, prominently on display, albeit at the lowest point on the vehicle. The air-cooled, lithium-ion batteries are stacked above it, but hidden by black body panels.

Driving the LiveWire is a totally different experience than driving a traditional Harley, says Joe Sessa, director of the NYC Harley Owners Group. “You can’t even compare that to a regular Harley,” he says after taking a LiveWire for a spin. “It’s like night and day. I mean, there’s no sound, no shifting, no clutch, the torque is unbelievable. It’s a whole new animal.”

Torque is rated at 52 foot-pounds, about what the Harley Sportster makes. But nearly 100 percent of that power is available instantaneously, which allows for neck-snapping acceleration of 0 to 60 miles per hour in less than 4 seconds. Top speed is limited to a little over 90 miles per hour due to the gearing of the electric motor.

There are two drive modes, one that gives full power, and a second that curbs power output by 40 percent to conserve energy. Harley estimates the total range on a full battery to be about 53 miles. That’s enough for Sessa to commute to and from work on Long Island, N.Y., from his home in Queens, about 40 miles roundtrip.

Consensus among those who tested the LiveWire is that it will be most at home in urban environments, where its smooth torque delivery and lack of a clutch make it a dream to drive in congested traffic. “It’s just incredible, because there’s no shifting, there’s no clutching, none of that stuff,” Sessa says. “You can just ride and just go. With the other one, it’s shifting and downshifting every light, every block.”

Many said they would consider owning a bike like the LiveWire in addition to their regular Harley. “If I could have a touring bike that I could do long distances on, which I don’t have right now,” says Carmen Roberts, an NYC HOG member who rides a 1974 Sportster, “I would have this as a second urban bike to zip around town and just go here and there, short runs. I would definitely buy it.”

Others needed more convincing. Louis Diaz Jr., who started riding Harleys again in 2009, after a hiatus, says he’d miss not being able to shift gears for himself. The quiet motor could be a liability in his eyes, too, as he views the loud and unmistakable blat of a Harley V-twin engine as providing some measure of safety by announcing your presence to other motorists.

But Diaz hadn’t had his turn on the LiveWire yet. Was he open to changing his mind about it once he took it for a spin? “We’ll see.”

Though the range of the LiveWire does not seem too constricting when you consider that a Harley Sportster 48 goes for roughly 70 miles on a tank of gas, the electric bike requires 3.5 hours with a 220-volt charger to top off the empty batteries, rather than just a few minutes at a gas pump.

It also takes a little getting used to on the road. “The thing that was surprising was how quickly it slowed down,” Roberts says. “The minute you let off the throttle: zoom! It just almost came to an immediate stop. So that was the only little thing that took some adjusting to.”

At 460 pounds, the LiveWire is a couple hundred pounds lighter than any gas-powered Harley.

But detailed specs are unavailable. Harley-Davidson isn’t releasing information on the electric motor and battery’s total output in kilowatt-hours, nor is it saying how much a bike like the LiveWire would cost should it reach production. Part of the reason for that is due to the rapid pace at which battery technology is evolving, Harley execs say. In a couple of years, battery technology will already have moved on from where it is today. And if Harley does produce an electric motorcycle, it will have the latest and greatest technology available at the time.

For now, Harley is taking the LiveWire on a tour of 30 dealerships around the country to let existing and potential Harley customers test it out and offer feedback. The U.S. demo tour runs through the end of the year. It goes to Canada and Europe in 2015.

Michelle Kumbier, SVP of motorcycle operations sees the LiveWire appealing to a new, younger generation of motorcycle riders, one that might never have considered a Harley before. “We’re doing a lot around really growing and expanding our reach as a company and as a brand,” Kumbier says.

Roberts agrees. “I could see the younger generations seeing it as their first bike, their primary bike—especially if they’re doing urban riding,” she says.

But don’t discount the LiveWire’s appeal to BabyBoomers, either. John Maguire, general manager of Harley-Davidson of New York City, says if Harley makes an electric motorcycle, he’s getting one as soon as it comes out.

He drove a LiveWire for a couple of hours and got to take it up to speed on FDR Drive in Manhattan. “On your traditional gas Harley, you get that Zen moment where you have the hum of the motor and the wind and everything. Subtract the hum of the motor: It’s like flying. It’s just wind passing. It’s really great.”