With training wheels off, many robots in the Pentagon's competition will fall all over themselves 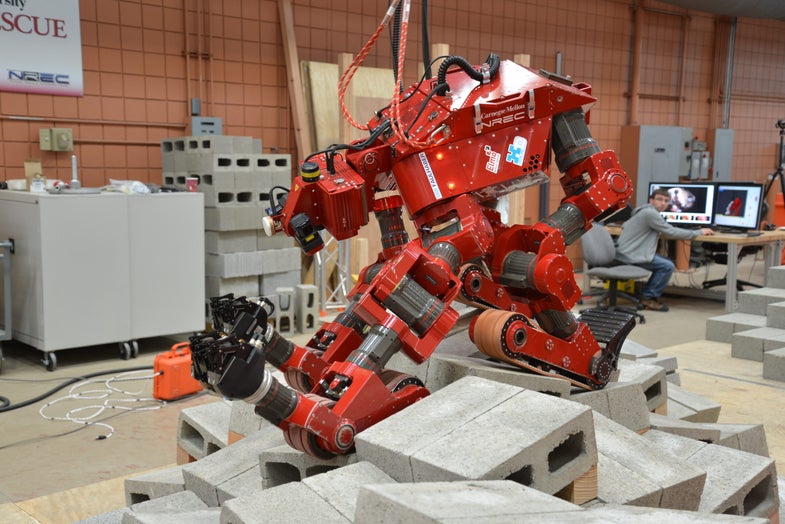 Yesterday, DARPA revealed two important pieces of news, regarding the final stage of the world’s most ambitious robotics competition.

The first was the full lineup of teams headed to the DARPA Robotics Challenge (DRC) finals on June 5-6. A total of 25 teams will compete during the two-day event, including a team hailing from the People’s Republic of China. It’s possible, in other words, that the Pentagon will wind up handing up to $2M in prize money to a group Chinese roboticists. This outcome wouldn’t actually be scandalous to close observers of the DRC, whose goal is to foster the development of robot first responders, who can be sent into a disaster zones that are considered too dangerous for humans. Saving lives, and mitigating the impact of large-scale disasters, should be an apolitical enterprise. Still, it’s safe to assume that much attention will be lavished on the success or failure of China’s entry in a Pentagon-funded competition.

The other major news to come out of DARPA’s announcement is of a more technical, and potentially hilarious nature. “We’re cutting the cord,” said DRC program manager Gill Pratt during a telephone briefing yesterday. “None of the robots have tethers.” The machines competing in June won’t have power cords, communication cables, or—and this is the most important part—safety tethers.

Let’s be clear about this: Robots are going to faceplant during the DRC finals. From the Italian team’s WALK-MAN to the Japanese HRP2, most of the 25 robots are bipeds, with the approximate proportions of a human being. A number of teams are actually using the same humanoid robot, the 6-foot-tall Atlas, which was built by Boston Dynamics (before it was acquired by Google) and supplied to qualifying teams whose focus was on software, rather than hardware.

“None of the robots have tethers.”

There are advantages to aping the human form, in a competition like the DRC. During the upcoming finals, each robot will be given an hour to accomplish a sequence of tasks, including moving debris, turning a valve, and sawing through a wall with a power tool. The first task, however, will be for robots to drive roughly 100 meters in a utility vehicle, and extricate themselves without human assistance. Teams can elect to bypass a given task, but that means losing out on the corresponding points. Winning the DRC is almost entirely about your final point total, with ties broken based on total time spent on the course. So the possession of a robotic posterior, and one that fits between a seat and a steering wheel (the vehicles resemble a ruggedized golf cart) could mean the difference between victory and defeat.

And yet, humanoid robots are nearly always on on the verge of destroying themselves. Bipedal movement is a constant balancing act, and any misstep or momentary lack of vigilance can end in a fall. Though humans have a healthy fear of falling, we have the good fortune of being equipped with various squishy and compliant components that surround our more brittle bits. Present-day robots are rarely so lucky. A typical humanoid bot wears its skeleton on its sleeve. Combine that tendency to shatter with a complete lack of biological instincts (to brace for impact or shield oneself from the worst injuries), and falls are a humanoid bot’s worst, and ever-present enemy.

During the DRC trials in 2013, robots fell like crazy. Safety tethers prevented the competition from devolving into slapstick, but those safeguards are now gone. And to add insult to inevitable injury, Pratt explained that if a machine takes a spill, human team members can’t simply scramble onto the course to set it back on its feet. Robots will be required to either get up on their own, or else be disqualified. In fact, the teams that qualified for the finals without going through the 2013 physical trials had to demonstrate the ability to stand up from a prone position. DARPA knows that falling is likely to be a major part of the finals.

If falling becomes embarrassingly rampant, Pratt has a backup plan—teams might be able to pull their robot from the course, and reset it back at the beginning. This would roughly simulate sending a second machine into a disaster zone, once the first one fails. The clock would not stop, however, during this process, and no new points would be awarded for tasks completed up to the point where the bot had to be extricated. Whether it results in physical incapacitation, immediate disqualification, or a time-sucking return to the starting line, a fall could mean everything in the DRC. Who care how strong, perceptive, and dextrous your robot is, if it’s lying inert on the course?

Setting the competition aside for a moment, DARPA is right to focus on the problem of robots falling. Bots that are designed to work among humans, possibly even saving their lives, should be among the safest robots ever created. We shouldn’t cross our fingers, and simply hope that an unstable humanoid has a good day out there in the rubble-strewn chaos of a disaster zone. Roboticists should know, with the utmost certainty, that their creations won’t topple onto the very people they’re trying to rescue.

That’s true of robots with less heroic missions, such as the dream of domestic servants tasked with doing household chores. Is it worth mimicking the human body in the name of efficiency and familiarity, if there’s any chance that your Rosie the Robot-style machine is going to lose its footing, and land on a crawling newborn?

It was clear from the beginning that the DRC would be a crucible for humanoid robots. DARPA was brilliant in this regard, choosing a scenario where human-shaped machines are the obvious choice. Legs are theoretically great for going where iRobot’s tracked bots couldn’t, during the nuclear power plant disaster in Fukushima. Arms and hands could transform a robot from a mere scout and witness into an active participant. Now, DARPA is showing its smarts yet again, by holding the humanoid’s feet to the fire, and forcing teams to address his class of robot’s biggest disadvantage. 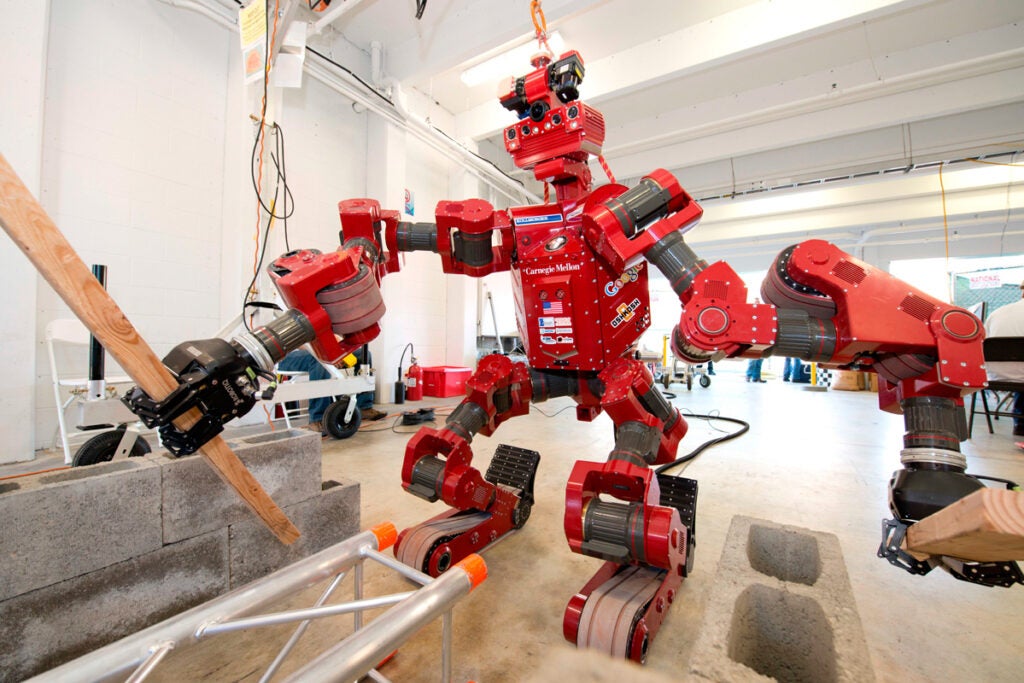 Which brings us to four robots that suddenly look more promising than ever, because of their intentionally inhuman forms. When asked about the issue of robots falling, Pratt noted that not all of the entries were in as much danger, and name-checked Carnegie Mellon University’s primate-inspired bot. “Some of the machines that are being put forward, I’ll give the CMU one, called CHIMP, as an example, are actually set up almost so that they really almost can’t fall down. If you look at the CMU machine on our website, it’s what you would call statically stable, which means its very hard for it to flip over.”

CHIMP is capable of standing relatively upright on two legs, but like its namesake, most of its movement is carried out on four appendages, crawling across rubble as opposed to walking over it. Unlike a biological primate, through, the robot can also roll across smooth terrain, using tracks in its feet and forearms. Another reason to take this robot serious is its lineage. CMU won DARPA’s last robotics contents, the Urban Challenge, in 2007. Most of that team has since moved on (including Chris Urmson, who’s now heading Google’s driverless car program) but the university remains a robotics powerhouse. 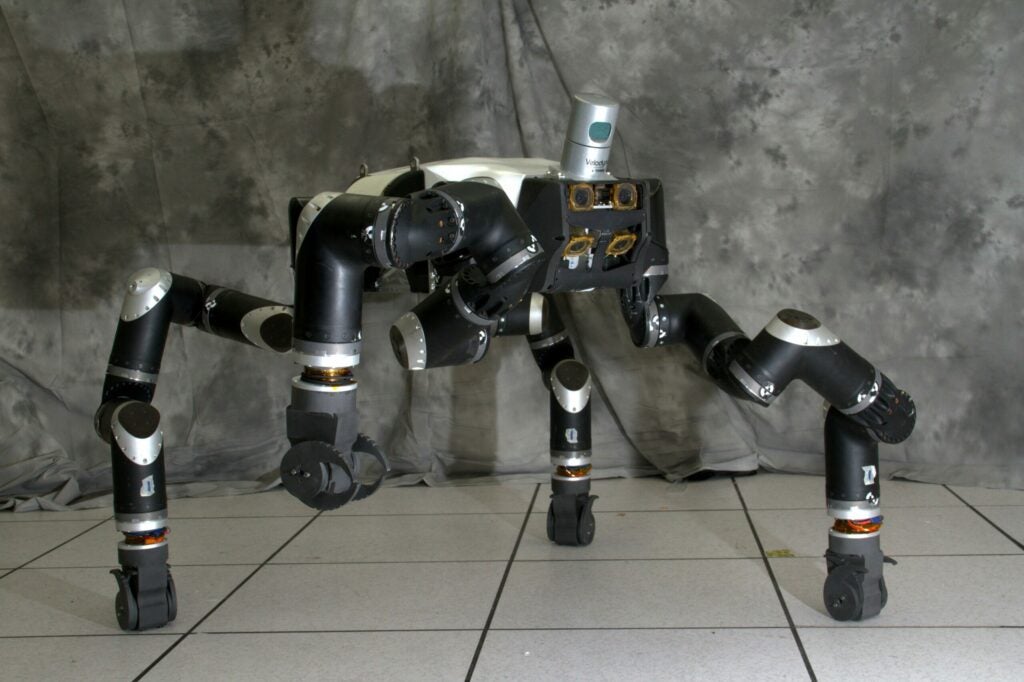 Another non-humanoid to watch is NASA’s quadrupedal RoboSimian. Created by researchers at Jet Propulsion Laboratory (or JPL, the birthplace of the famed Spirit and Opportunity Mars rovers), has no true front or back, and can clamber in essentially any direction with minimal time and energy spent reorienting itself. But it’s also inherently surefooted. “The question of falling over is a key aspect of the RoboSimian design, but maybe not only in the most obvious way,” says Brett Kennedy principle investigator for JPL’s robots. Because it’s statically stable, the robot can conserve battery power during the long stretches when its human overseers are strategizing. A humanoid bot would have to spend those same waiting periods burning electricity to keep itself balanced. “RoboSimian is a very power patient robot,” says Kennedy. Whether energy conservation plays a role in the DRC—bots can’t be recharged during their runs, which could last as long as an hour—power storage and management will remain a challenge for robots in the real world for years to come. While a machine like RoboSimian might be capable of crouching at the ready for hours, a humanoid might have to remain on a constant lookout for reinforced chairs, to rest its weary actuators. 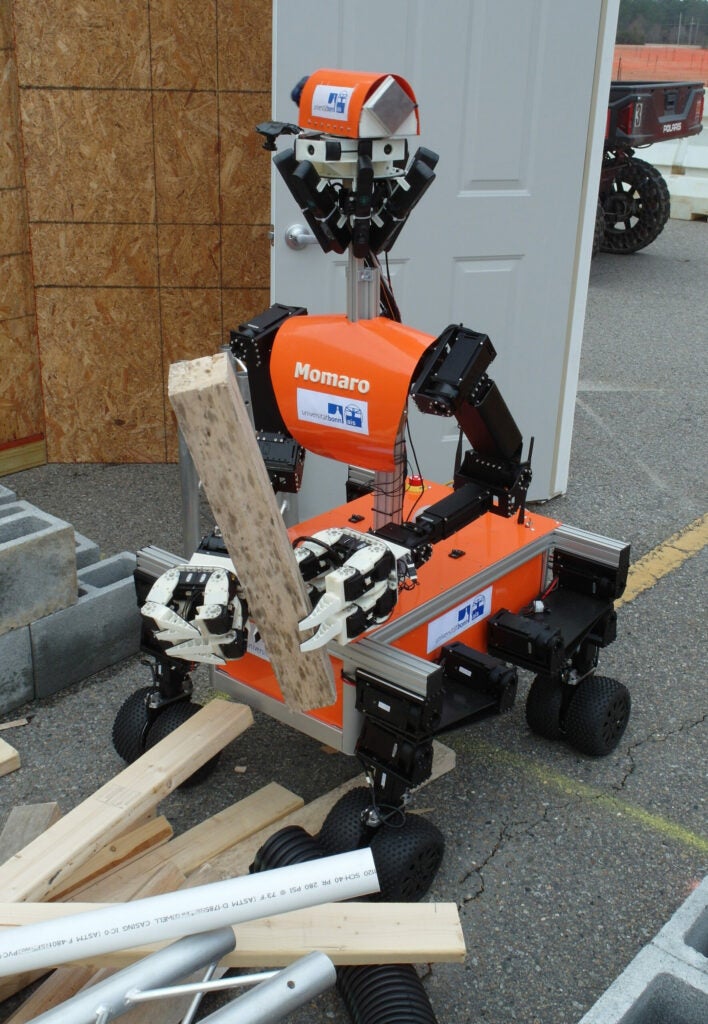 One of the latecomers to the DRC field is Momaro, whose humanoid upper body rises, centaur-like, from a wheeled and four-legged platform. Built by researchers at the University of Bonn in Germany, Momaro’s legs are highly articulated, and can effectively fold down or extend upward as needed, including to hike over relatively tall obstacles. 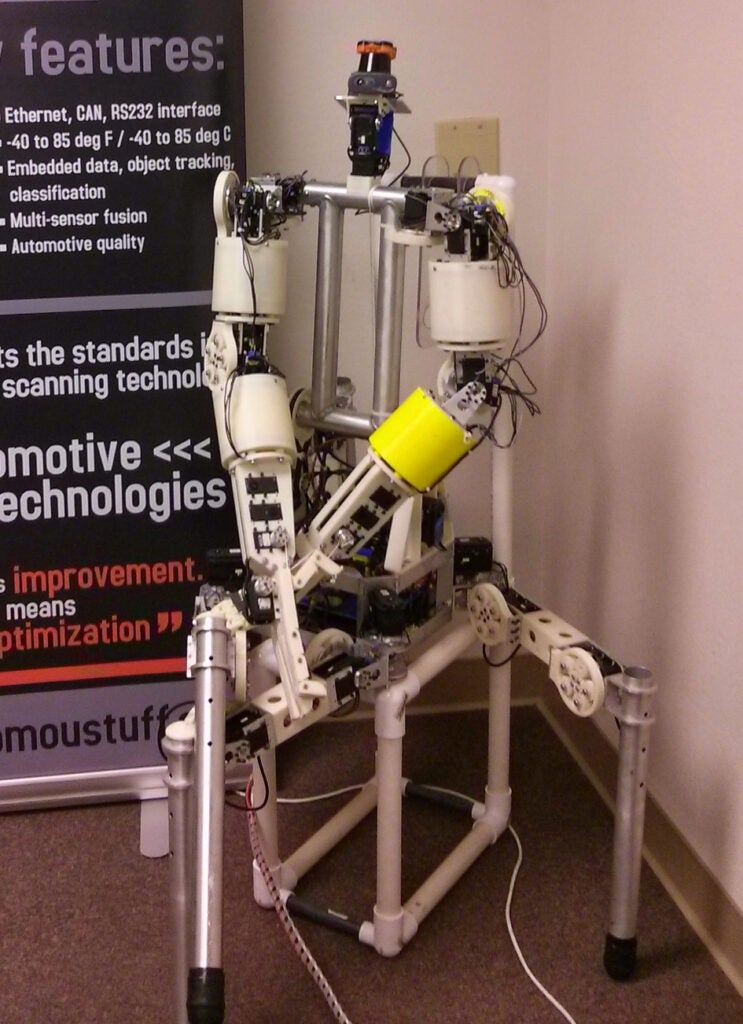 Finally, the biggest underdog among the inhumans is probably Team Grit Robotics, whose members come from a range of academic institutions and private companies, including Colorado Mesa University and Amazon. Their four-legged bot, Cog-Burn, is a comparative featherweight, weighing just 37 pounds, and built in part from 3D-printed components. While some of the competing bots cost upwards of $1M, Team Grit Robotics cobbled together some $20,000 to make Cog-Burn (Momaro is also self-funded).

I’m not highlighting these teams because they’re inherently poised to win or place in the DRC. The only sure thing about the finals is that they’re going to be unpredictable. Now that the 2013 event’s highest-scoring team is no longer in the competition (Google acquired the Japanese company backing that team immediately before those trials, and quietly yanked them afterwards), there’s no established champion to beat. And along with the eight designated tasks that mirror those from the previous physical trials, DARPA is adding a surprise task, to be revealed during the finals. But there’s more than a few million dollars on the line. Humanoids are a famously useless design for robots, with bots like Honda’s Asimo excelling only at dancing and bowing for our collective amusement. The DRC is where humanoids will either prove themselves, once and for all, or step aside. Robots like CHIMP, Cog-Burn, Momaro and RoboSimian could deal a serious blow to the development of bipedal bots.

But just to reiterate, the DRC is also where robots are going to topple over and smash themselves to pieces. That’s good, clean fun for all of humanity.