You might say I was dizzy with delight. The nausea began, of all places, in the middle of a parking... 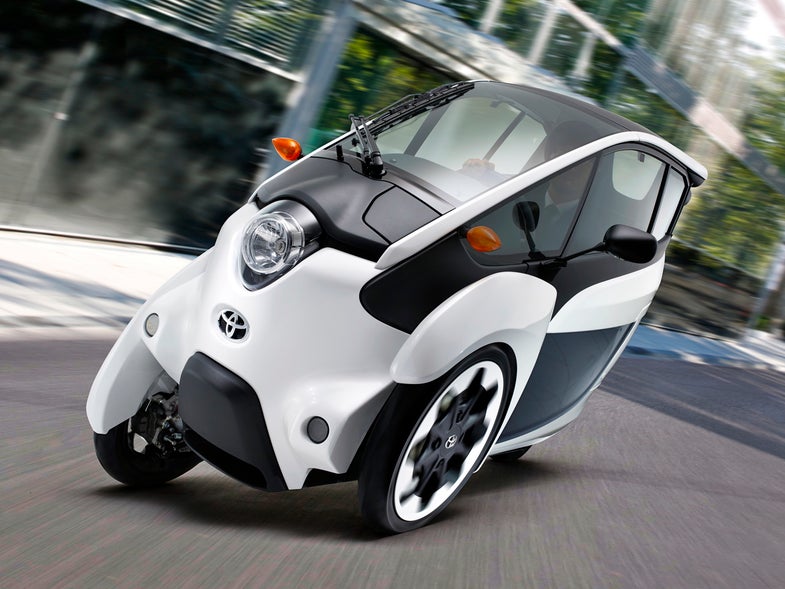 The nausea began, of all places, in the middle of a parking lot at Toyota’s secretive research-and-development facility an hour outside Tokyo.

Exuberance over being given three minutes behind the wheel of an experimental vehicle called the Toyota i-Road had gotten to me. All I could think was: This machine is like a real-world Light Cycle from Tron—and I get to drive it!

The i-Road is about as wide as the largest motorcycles on the road today and seats two people, one behind the other, in a fully-enclosed cockpit. It has two articulating wheels in the front, each powered by a small, two-kilowatt electric motor, and one in the back, which swivels like the wheel on a shopping cart.

Here’s the really cool part, though: The i-Road stands upright when stationary but leans into turns like a motorcycle. (That’s where the nausea comes in.)

It was such a blast to drive that I couldn’t help going in circles and doing figure eights just to feel it lean and glide through turns. Although the accelerator, brake pedal, and steering wheel operate just like in a regular car, the sensation behind the wheel is unlike anything I’ve experienced in more than a decade of testing all manner of road vehicles, from dune buggies to multimillion-dollar exotics.

Driving the i-Road feels like being in a motor boat, airplane, and low-slung sports car all at once. The horizon constantly changes angles in front of you. Through the side window, pavement rises up to fill your peripheral vision as you turn. The calming whir of its electric motors would not be out of place on the Starship Enterprise.

But that was on purpose: The i-Road has as a G meter that calculates how much the body leans and limits the angle so it will never tip over. Toyota engineers made it so the steering wheel vibrates to let drivers know when the i-Road is leaning at its maximum angle.

As fun as the i-Road was, the constant shift in equilibrium coupled with the claustrophobic cabin quickly made me queasy. Fortunately, all it took to settle my stomach was easing off the throttle so the vehicle wouldn’t lean as much when turning.

Go slowly enough and the i-Road won’t lean at all. At parking-lot speeds, it steers by pivoting the rear wheel, which makes it extremely nimble in tight quarters.

Toyota had us test how the aritculating front wheels act like a suspension system to smooth out the ride by driving down an incline and over a slight curb at an angle. It was like the i-Road descended a staircase without jostling the cabin. Though the articulating action of the front wheels seemed effortless, it was quite a challenge to make their electrical and mechanical systems work in harmony, says Makoto Morita, chief engineer for the Toyota i-Road.

Articulating wheels like those on the Toyota i-Road are not unheard of. Piaggio makes a scooter called the MP3 that has them, and Nissan experimented with similar technology on a concept car called the Land Glider.

Toyota designed the i-Road for traveling short distances in cities. The idea was to create a vehicle that is as compact as a motorcycle, but safer and more comfortable thanks to the enclosed cabin.

Its lithium-ion battery allows a range of about 30 miles and takes several hours to recharge using a conventional wall socket. Top speed is limited to 28 miles per hour in Europe and 37 miles per hour in Japan, in keeping with each country’s regulations regarding so-called neighborhood electric vehicles, which don’t require the same safety standards as passenger vehicles.

A fleet of i-Roads is currently being tested as part of a pilot program in Japan. More will go into rotation with another program in Grenoble, France, this fall. Toyota hopes to eventually sell the i-Road in Europe and Asia, but hasn’t said when it will do so, nor whether the U.S. will get it.

As a concept, however, the i-Road is particularly encouraging—especially to us car enthusiasts—because it proves that personal mobility can still be enjoyable, even as automakers continue to pursue alternative fuels and increased efficiency.