Aluminum-Ion Batteries Are Flexible, Fast-Charging, And Won’t Catch On Fire

But don't expect to find them in Costco just yet 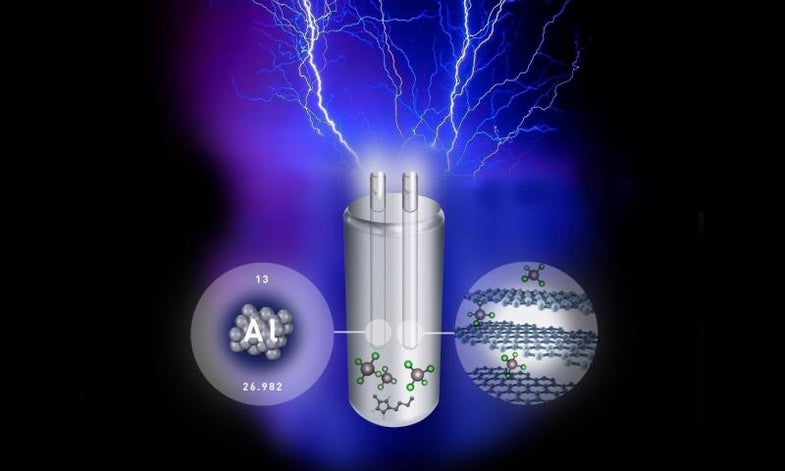 Almost all of the electronic devices that we carry around with us all day now rely on one key, but increasingly antiquated, technology: the lithium-ion battery. A mainstay of rechargeable power for the last couple decades, this battery technology has gotten only minor refinements. But a substantial improvement in stored power may be in the offing, thanks to researchers at Stanford University, who have developed a new battery technology based on aluminum.

This isn’t the first time that aluminum-based batteries have been investigated. The material has a number of advantages over lithium: it’s flexible, allowing it to be folded or bent without losing power; can be charged in a minute instead of hours; and is incredibly durable–according to Stanford chemistry professor Hongjie Dai, you can even drill a hole through the battery and it will continue to work. That’s good for volatility too: compromise a lithium-ion battery and you’ll likely see some sparks or flame, but the materials in this new battery are all non-reactive. And, aluminum is cheaper than lithium, too.

All good things, so why haven’t we seen more aluminum batteries? The catch to date has been finding another material to work with aluminum in creating energy. The Stanford team ended up using our old friend graphene to play the cathode to aluminum’s anode. But though that’s helped unlock better performance, including more charge cycles–7,500 versus the 1,000 you’d likely get out of a Li-ion battery–aluminum-ion’s woes aren’t all behind it. The voltage provided by an aluminum-ion battery is only about half of that what you’d get from a lithium-ion cell. And, as Ars Technica points out, the overall power density–the amount of juice you can store in a battery vis-a-vis its size–more closely resembles the large lead-acid battery you’d find in your car.

So aluminum-ion batteries still aren’t quite ready for primetime, but you can bet that electronics manufacturers, makers of electric cars, and power companies all have their eyes on the development of this technology.

Meanwhile, researchers are working to enhance the performance of lithium-ion batteries using materials like carbon nanotubes, but the returns are diminishing. And other new technologies, like sulfur-based and metal-air batteries have their own downsides as well. Should scientists be able to increase the power and energy density of aluminum-ion batteries, its speed of charging, lack of volatility, and cheap production costs could make it the one to beat.