A look at the inner workings of GM's plug-in car 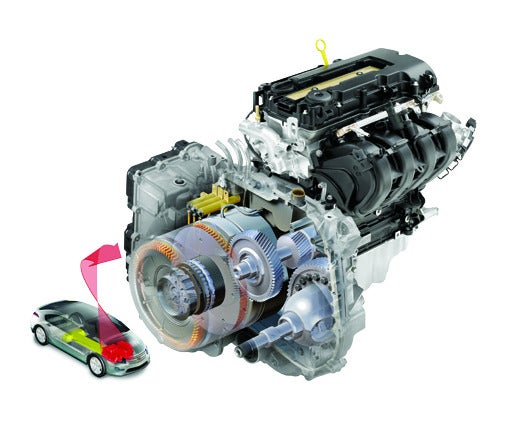 In principle, the Chevrolet Volt is simple: It’s an electric car with a gas-powered generator for backup. Yet the machinery under the hood is complex. The overarching goal is to wring maximum miles out of the Volt’s lithium-ion battery and, when gasoline is necessary, to use it frugally. This requires the Volt’s drivetrain—composed of two electric motors, a gasoline engine, three clutches and a planetary gearset—to blend power from different sources to find the perfect balance in every driving situation.

Here’s how it happens.

Driving around town at up to approximately 40 mph, power flows from the 400-pound, 16-kilowatt-hour lithium-ion battery to a large permanent-magnet motor, which moves the car.

The harder you push the car, the more stressed the primary motor becomes—until a second, smaller motor joins in, allowing the larger one to spin more slowly. The two motors connect
to the planetary gearset, which blends power from the pair into torque that drives the car.

Critics have argued that, because under some circumstances the gas engine helps power the wheels, the Volt is nothing new—a glorified Prius. But that’s not true. Efficient as it is, the Prius is a primarily gas-powered car. The Volt, in contrast, always drives like an electric car, and for up to 50 miles a day you’ll never burn a drop of gas.