Could This Hydrogen-Powered Drone Work? 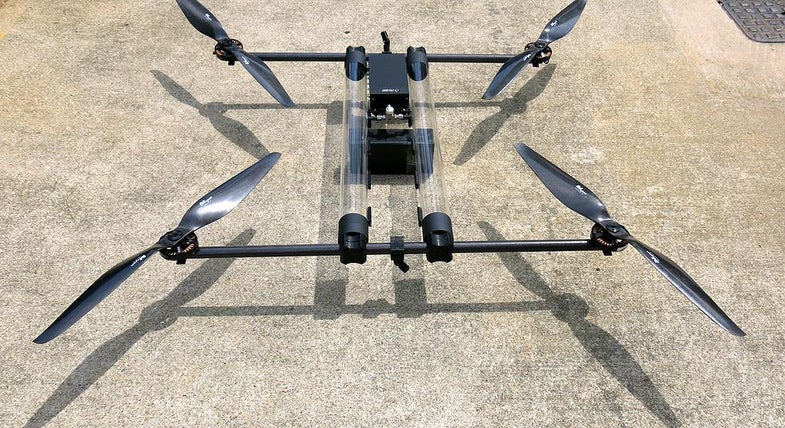 The biggest physical constraint on small drones is their power supply. Batteries can only hold so much energy, and as adding more batteries to a drone also increase the weight of that drone, there are finite limits on how long quadcopters can fly in a single flight. A new drone concept by Horizon Unmanned Systems seeks to overcome that limitation, by turning to an alternative power source: hydrogen fuel cells.

With a good charge, standard quadcopters can fly for about half an hour. If it works as planned, Horizon’s Hycopter promises four hours of flight without a payload, and 2.5 hours of flight time with a 2-pound payload. Making this possible is an ultralight fuel cell, created by Horizon Energy Systems, and two tubes on the drone’s body that store hydrogen.

Hydrogen fuel cells work by reacting hydrogen with oxygen. A metal plate pulls electrons off the hydrogen atoms, and the stripped hydrogen combines with oxygen to form water, a byproduct. The electrons it leaves behind provide an electrical charge for the drone.

Because hydrogen is a gas, it doesn’t add a lot of extra weight to the drone. The total weight of the gas is just 4 ounces, but Horizon claims that the fuel cell provides as much power as 105 ounces of lithium ion battery.

The company plans to do a four-hour flight test later in 2015. The Hycopter made an appearance at the Association for Unmanned Vehicle Systems International 2015 exposition in Georgia earlier this year, and cameoed on a news segment. Watch below: