Nanogenerators Will Let Car Tires Pull Electricity From The Ground 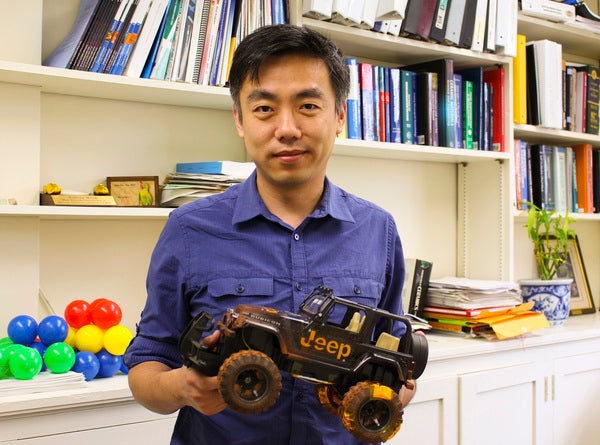 It’s becoming clear: electric cars are the future. Between electric mainstays like Tesla and legacy car manufacturers like Ford and Chevrolet, the auto industry is racing towards making truly viable electric cars. Now, researchers at the University of Wisconsin-Madison are helping that process along, with a nanogenerator meant to help car tires pull their own weight, by pulling latent electricity from the ground itself.

The UW-Madison team created a type of single-electrode triboelectric nanogenerator (a well-studied method of turning mechanical energy into electric energy) and optimized it for specific use in cars.

Reclaiming electricity from our tires could extend the battery life and range of electric or hybrid cars, adding to energy already recouped by processes like regenerative braking.

Zhong Lin Wang, creator of the first triboelectic nanogenerators in 2012, has claimed to regain up to 85 percent of the total energy used. The TENG harvests the electricity that’s naturally transferred between two different surfaces when they come into contact and are pulled apart. A high rate of repetition makes a rotating car tire perfect for this application.

Xudong Wang, professor at the University of Wisconsin- Madison, says that in this application his team has been able to recoup up to 10.4 percent of the energy expended in early prototype stages, which is roughly the amount Wang hopes will stay constant as they develop larger prototypes.

Researchers tested the TENGs by securing six strips of the material on the back wheels of a electric toy car, which also had six LED lights attached. The power generated by the toy car in motion lit all six LED lights, and at its peak, reached 1.79 milliwatts. However, the wattage increases with the weight and speed of the vehicle used, so researchers believe the output will grow with the size and weight of the tires used, according to the paper published in Nano Energy.

While cars may never be fully-powered by their wheels, this technology comes at a time when fully-electric cars (which are greatly limited by the power they’re able to hold) are beginning to gain popularity.

An electric car like the Nissan Leaf uses a 80 kilowatt engine—but if 10 percent of its energy can be recouped, that could mean a considerable amount of extra milage per charge. (Around 8 extra miles for the Leaf, and up to 27 for a Tesla.)

While the materials can scale, Wang is still working on implementation and design. His biggest challenge: he doesn’t know how to build a full-sized car tire. However, he continues to work with his team to scale the technology towards that point.