Electric motorcycles no longer need be thought of as slow and boring. When the Brammo Empulse, successor to last year’s... 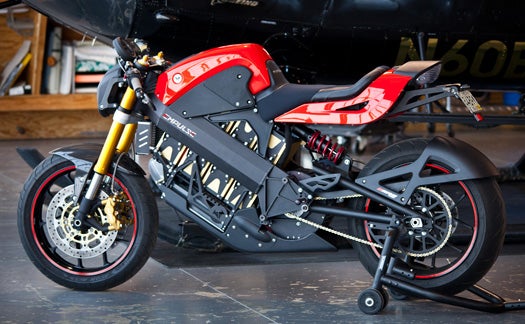 Electric motorcycles no longer need be thought of as slow and boring. When the Brammo Empulse, successor to last year’s Enertia, goes on sale early next year it’ll be capable of reaching speeds in excess of 100 mph with an average range of up to 100 miles.

That bests the Enertia’s 60 mph ceiling over a range of 45 miles. The key to the performance boost is a new liquid-cooled motor a little bit similar to the one used on the 2010 MotoCzysz E1pc, but unlike that futuristic, one-off race bike, this one will be available at Best Buy and will be surprisingly affordable. Prices will run from $9,995 to $13,995, but a raft of electric vehicle tax breaks could bring that more expensive figure as low as $7,000 depending on which state you live in and which breaks you qualify for.

The Empulse puts out 55 HP and 59 Lb-Ft of torque while weighing just 390 Lbs. That should give it performance on par with a 650cc Suzuki Internal Combustion Engine motorcycle, which is to say it’ll accelerate faster than most sports cars.

Three models will be offered, with battery pack capacities the only thing separating them:

Those ranges have been calculated using an equal mix of city and highway riding. Stick to slower surface streets and the 10.0’s range will increase to 130+ miles, while long periods of high-speed cruising could see it shrink to 60-70 miles.

The big technology breakthrough here is the price-to-energy density ratio of the battery packs. While Brammo doesn’t plan to say much about the proprietary technology before the Empulse goes on sale early next year, expect some sort of Lithium Polymer chemistry. To put that ratio into perspective, Brammo’s biggest competitor, Zero Motorycles, offers bikes with a 4kWh capacity for $9,995.

Unfortunately, that new technology isn’t going to do much for recharge times. Using a standard 110v outlet, expect the 10.0 to take between six and eight hours for a full charge. Battery charge times aren’t linear though, a quick top-up of a half or three-quarters full battery should only take a couple hours.

Like all other electric motorcycles, the Empulse will be virtually silent and there’s no tailpipe to spew harmful emissions. 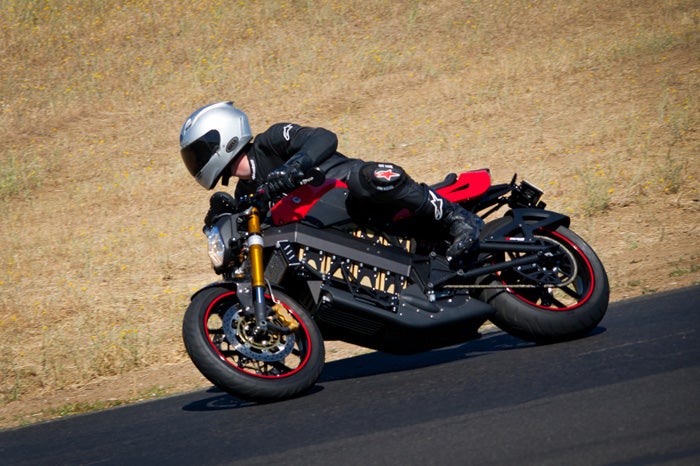 The bike you see in these photos is actually a pre-production unit fitted with a lower-spec motor. The guy riding it is Brammo’s designer Brian Wismann who says, “even with 40 HP, the bike has no problem reaching 100 mph.”

“It’s not the fastest thing on the road,” continues Wismann, “but it is really fun to ride and is plenty fast to get yourself into trouble.”

The Empulse isn’t just going to be a straight-line performer though. Its stiff aluminum frame and top-drawer suspension mean its designed to go around corners too. Brammo actually plans to unveil the Empulse to the public by racing it against the MotoCzysz at California’s Laguna Seca Raceway later this month. It might not win, but it will be the only race bike there you’ll see in a Best Buy showroom in six to seven months time. 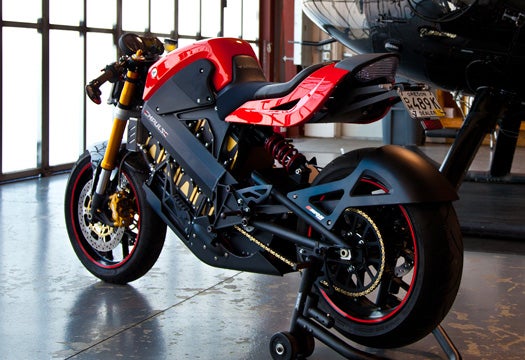 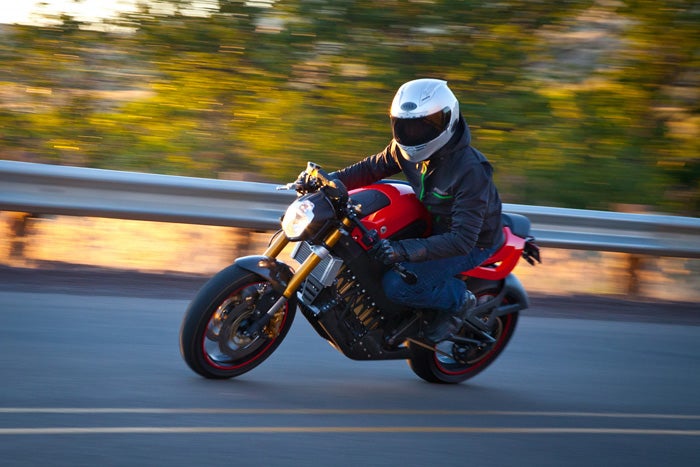 Brammo Empulse on the Track 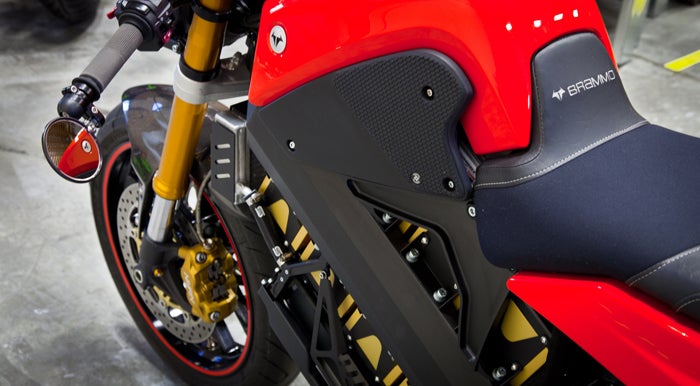 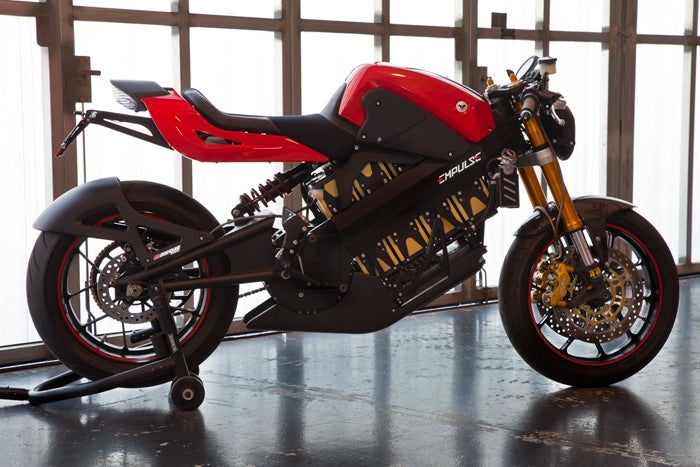 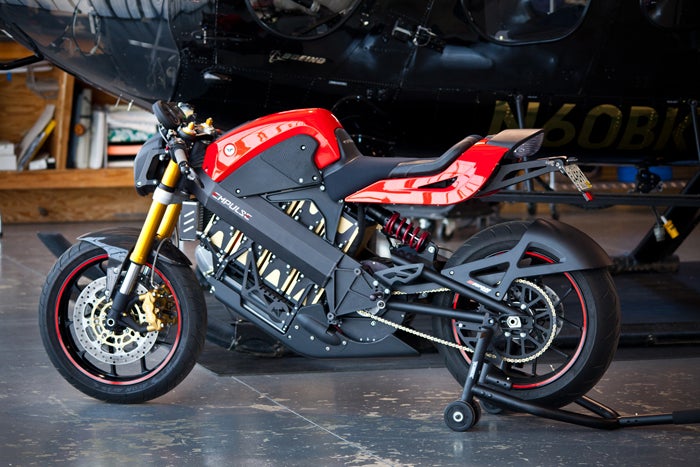 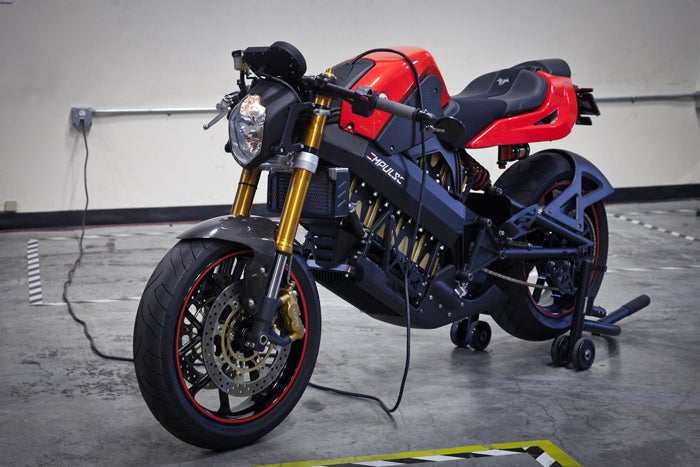 You can expect six to eight hours for a full charge from your home’s outlet, but a top-off to half or three-quarters full will be quick. 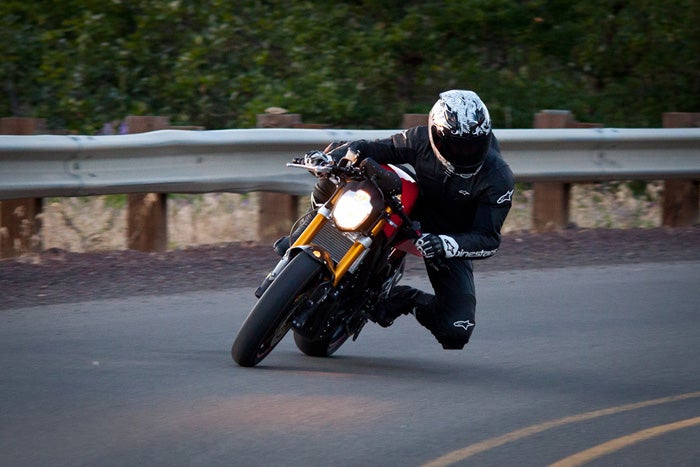 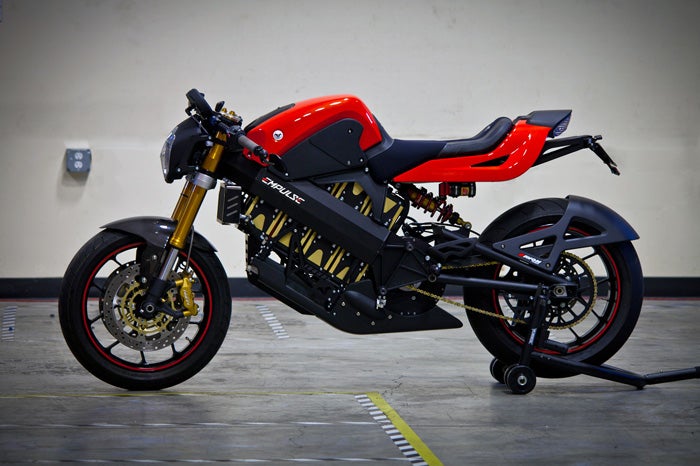