You'll need to rethink the way you drive, literally 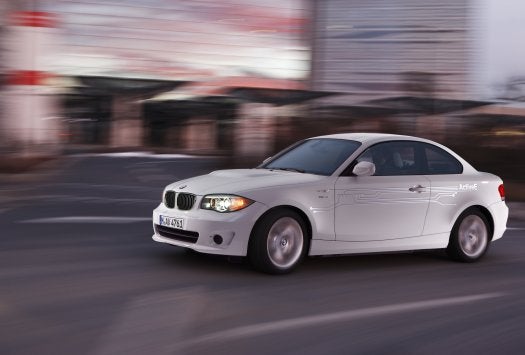 The ActiveE is BMW’s all-new electric vehicle, designed as a ‘beta’ version of the forthcoming i3. Based on the swell little 1 Series Coupe, the Active E uses similar drive train and battery technologies as the i3, but in a less future-luxe package.

BMW says the Active E represents the second part of their three-phase electric vehicle development plan, which will culminate in the series production of the BMW i3 electric vehicle sometime in 2013.

BMW took what they learned from the MINI E and created, for the first time, what feels like a fully realized electric car. BMW developed everything in the car – the energy storage module, its wiring, the electric motor, the power electronics and the transmission. The power plant – a 170-horsepower, 184 pound-feet-of-torque, 125-kW electric motor – is shoehorned into the engine bay and is powered by a 32-kilowatt-hour lithium-ion battery pack. While BMW designed the battery pack too, the cells are made by SB LiMotive, a partnership between Samsung and Bosch.

Because lithium-ion batteries are so temperature-sensitive, BMW developed a new management system with a ‘Smart Function’ that warms the battery pack remotely, resulting in less loss. Also new on the Active E is a ‘Gliding” mode, which makes for a less obtrusive drive. That said, it takes some time to learn to drive an electric car. Whereas in a gas-powered car, you slow down by using the brakes, in the Active E, you can slow down using the accelerator pedal, via brake energy regeneration. To wit: when you lift off the accelerator, the electric motor becomes, as BMW says ‘a generator that feeds the electricity gained from kinetic energy back into the vehicle battery,” resulting in torque braking. BMW says you can spend 75 percent of city driving never using the brake pedal. On our 20-mile loop in the car that proved true.

Unlike the much-maligned drive on the MINI E, the drive on the Active E is pretty damn good, electric vehicle or not. The regenerative braking is a lot less active than on the MINI E, which was close to the point of being obtrusive. While BMW told us the MINI E customers liked the regenerative braking, the engineers went back and did a major re-think, resulting in the new gliding mode. BMW calls this ‘a distinctive intermediate position of the accelerator pedal’ which allows the vehicle to glide without using any energy.

It’s somewhat hard to fault the short range of an electric car, but, while we really enjoyed the Active E, it would be hard to present it as an option for a one-car household. With a range of 100 miles or so, we’d still live in fear of running out of juice at an inopportune time or if your short commute turns into a long one due to traffic.

Also, you’ll need to rethink the way you drive. Due to the aforementioned regenerative braking and glide mode, you’ll need to learn to drive with just your left foot — and think of the ‘gas’ pedal as both an accelerator and a brake. Whoa!

The ActiveE is available with a 24-month lease in limited markets – Los Angeles, San Diego, San Francisco, Sacramento, New York, Boston and Hartford. For $499 per month, with $2,250 down, you too can drive off in one of the 700 electric BMWs allocated for the US. Which is about the same price you’ll pay for a well-equipped gas-powered 1 Series. Don’t forget, you’ll also need to pay for an in-home electric charging station, which runs about 2500 dollars.

BMW presents a pretty compelling proposition here. But while we admire and respect what BMW has accomplished with the Active E and feel they’ll have no problem leasing all 700 that are coming to the states, the Active E is starting to make us pine for the third stage of the BMW group electrification, the iBrand vehicles. That said, if you want an electric car now that ups the style factor from the Nissan Leaf, the Active E is the car for you.