Inside The First Production-Ready Electric Airplane 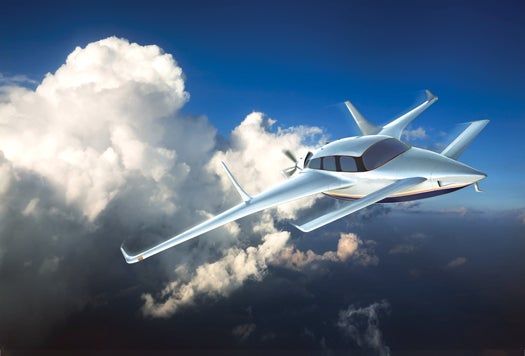 Engineers have historically faced two obstacles when designing electric aircraft. Batteries that run the electric motors have been too heavy and not energy-dense enough to provide sufficient power. And the consequences of failure were too high: Running out of power would all but assure a crash landing.

But in the past several years, says Paul Peterson, the founder and CEO of the Portland, Oregon, aeronautics company Volta Volare, off-the-shelf electric-car batteries and motors have become light, powerful and efficient enough to make electric—or at least hybrid—flight viable. This spring, Volta Volare will begin testing its four-passenger GT4. Constructed around a standard airframe, the plane runs on a hybrid powertrain similar to the one in the Chevrolet Volt, with batteries plus a backup gasoline engine.

An electric plane could be significantly less expensive to operate than a conventional aircraft. A 200-mile electric-powered flight in a single-engine personal plane would consume about $20 of electricity, compared with about $80 worth of aviation-grade gasoline, and an electric motor has only one moving part, so it would be largely maintenance-free. Peterson says that such cost reductions, combined with shared-ownership models, could make personal aviation vastly more accessible.

Canard Pusher Airframe: Peterson’s team settled early on a canard pusher airframe—so named for the canard, or short cross-wing near the plane’s nose, and the rear-mounted propeller, which “pushes” the craft through the air. The airframe’s “three-wing” design affords engineers a multitude of places in which to stash batteries.

Carbon-Composite Propeller: The GT4’s four-blade carbon-composite propellers are lighter than those made of metal or wood, but they are strong enough to handle the heavy, instantaneous torque that electric motors produce.

Hybrid Powertrain: The GT4 can take off, climb, and cruise up to 300 miles on battery power alone. When the power supply approaches 25 percent full, a battery controller signals the gas engine to kick in. The engine generates electricity, which recharges the battery.

Electric Motor: The GT4’s electric motor, which is made from the combined cores of two smaller motors, sits in a sealed aluminum housing. It can generate 600 peak horsepower and sustain 400 horsepower throughout flight. Unlike an internal-combustion engine, which requires a mechanic to spend a week dissecting and then reassembling the powertrain during annual inspections, the electric motor on the GT4 would involve just a quick electronic diagnostic by connecting a laptop to the plane by USB cable.

Electric-Car Batteries: A 900-pound lithium-polymer battery array—236 individual cells, each the size of a paperback book—powers the electric motor. The GT4’s hybrid powertrain is lighter than the gas engine that the canard pusher airframe was originally designed to carry, so engineers added extra batteries to balance the craft’s center of gravity. “In the old days,” Peterson says, “the pilot would move bags of lead shot in and out of the luggage compartment. Now we can use batteries for that.”

Range-Extending Gas Engine: A supercharged 1.5-liter gasoline engine backs up the electric system. A 23-gallon tank in the center fuselage holds enough unleaded gas to extend the GT4’s range up to 1,000 miles. Once batteries improve, engineers could remove the gas engine, converting the GT4 into an all-electric craft.

This article should have given the firm EVDrive credit as an engineering partner on the design of the GT4 aircraft’s drive train. We regret the omission.