CES 2015: The Gogoro Smartscooter Is A Tesla On Two Wheels 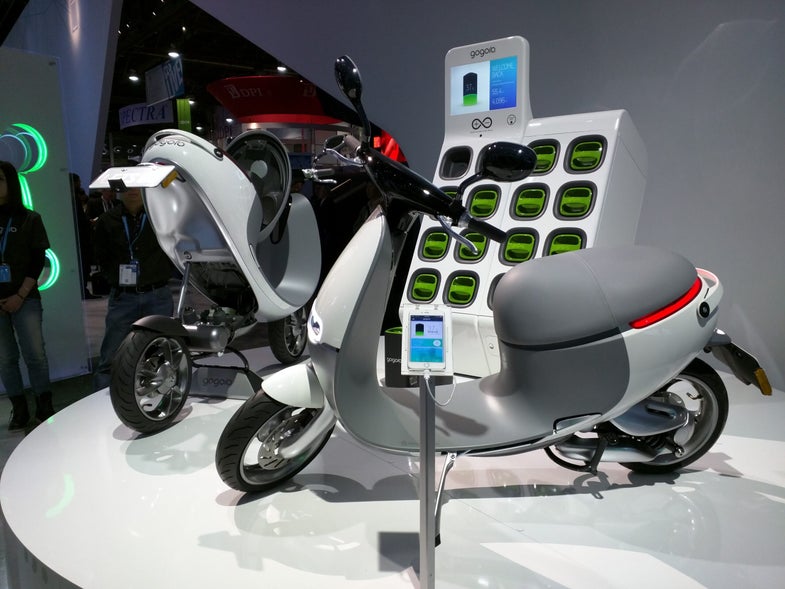 It’s tough living in a densely populated city. The air is polluted, the roads are congested, and the gas is expensive. Many urbanites resort to scooters for transportation, because they’re fuel-efficient and easy to maintain. The problem is that they still run on pricey gasoline and emit CO2 among other toxic chemicals. Gogoro’s new Smartscooter aims to change some of these downfalls typically found in two-wheeled vehicles.

The Gogoro Smartscooter is a powerful emission-free electric scooter built for people in the world’s most populated cities. It uses the same Panasonic Lithium Ion 18650 battery as the Tesla S, which means that the battery can be easily swapped out. For example, if a rider’s battery runs low, he or she could pull up to a battery station and exchange the low battery for a new one—meaning that fueling up the vehicle literally takes a few seconds.

The Smartscooter comes equipped with 30 onboard sensors that are able to detect when a part gives out or if something goes awry on the vehicle. It also has always-on Bluetooth connectivity that pairs with a smartphone app, allowing users to customize various parts of the vehicle. Get creative by downloading new sounds for different actions such as booting up and shutting down. You can even customize the light sequences of the headlights and taillights.

Gogoro didn’t skimp on the performance of the vehicle, either. Its top speed is 60 mph, plenty for your average city dweller, and its 0-to-30 speed is about 4 seconds. As a New Yorker who’s constantly bound to the schedule of the subway, I can safely say that this vehicle has implications far beyond other electric vehicles generating buzz. This is easily the sleekest and smartest two-wheeled vehicle I’ve ever seen.