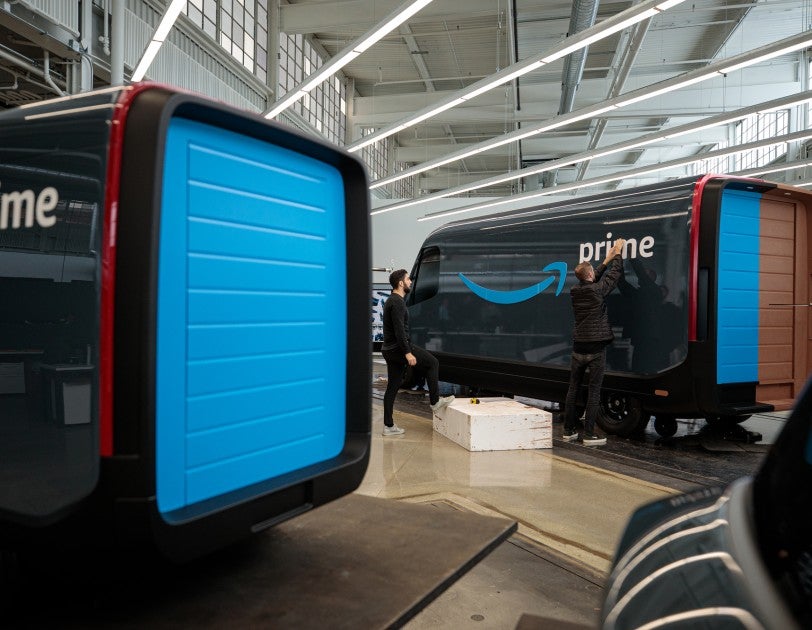 The vans take the same basic shape as the vehicles Amazon currently has on the road, but tweaks some critical aspects. Amazon
SHARE

While Amazon has drummed up plenty of hype for its small-scale drone delivery plans, the company announced something much more exciting—and tangible—this week. Starting in 2021, some Amazon delivery drivers will sit behind the wheel of a new electric delivery truck made with Rivian.

You may already be familiar with the Rivian name. The company is currently taking pre-orders for its R1T electric pickup truck and R1S electric SUV, both of which will cost around $70,000 when they ship. Rivian employs a technology it calls the Skateboard in its production vehicles. It involves a mostly-flat platform that contains the batteries, motors, and the rest of the drivetrain. From there, the company has a lot of flexibility in what it does with the cabin that sits on top. That allows for enticing features like a pickup truck with a built-in grill that slides out when you want to cook and copious amounts of storage space.

The partnership isn’t entirely surprising. Amazon was part of a large $2.5 billion investment into Rivian earlier this year. It’s also not all that surprising to see Amazon’s vehicle emerge almost fully-formed—Rivian started back in 2009, but didn’t introduce its first real commercial vehicles until 2018.

Amazon hasn’t gotten down to the nitty gritty details about the vehicles just yet—we still don’t know what kind of range or performance they will have. But, the company has shared some key details. The new van is one of three new vehicles involved with the Rivian partnership, and Amazon plans to have 10,000 total new rigs out on the road in 2022. By 2030, the company hopes to bump that number all the way up to 100,000.

The van itself has a new sensor array for collision avoidance and driver assist, which includes a cluster of cameras that can funnel a 360-degree view of the outside of the vehicle to the touchscreen inside. Amazon clearly doesn’t intend for the vehicle to drive itself, but if the sensors include time-of-flight and Lidar units, it could have a high-level of autonomy.

Amazon’s smart assistant Alexa will also come as standard equipment on the vans in order to allow drivers to request directions and weather via voice commands. The vehicle will be tied tightly into Amazon’s logistics systems, which Amazon says will increase safety and efficiency by reducing the need for extra devices. However, it could also increase the potential for the company to monitor the drivers’ every move.

Amazon and Rivian say the companies consulted with current Amazon delivery drivers to get feedback on what features they valued. Experienced drivers even tested different designs in VR to get more accurate feedback.

On the exterior of the vehicle, the windshield has been extended for better visibility and the brake lights outline the entire vehicle, which should make them difficult to miss if you’re driving behind one.

The vans will start rolling out next year, but Amazon’s electric fleet could change quickly if the company starts rolling out the other two Rivian designs it plans to launch. And while it may still be some time before they’re as omnipresent as other delivery vans, they will certainly beat drones to the delivery punch.