Suggested music for the TV ad: Daft Punk's "Around the World" 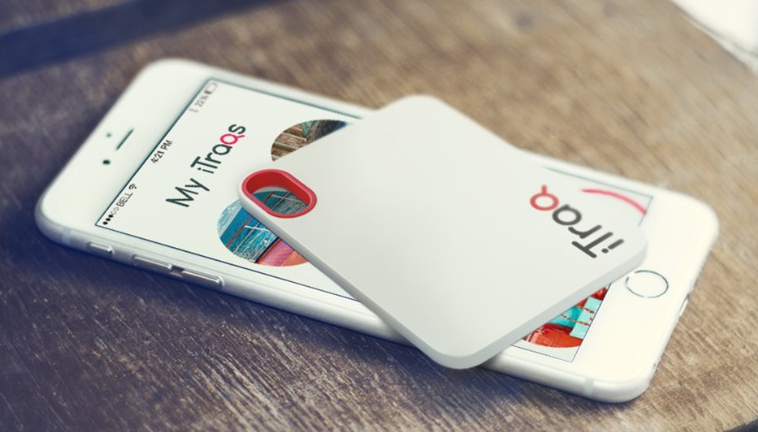 Knowing where you are–or where your stuff is–is sometimes a challenge. iTraq wants to help fix that by providing a tag about the size of a credit card that can report its location anywhere in the world.

Existing location tags mostly use Bluetooth, whose range tops out in the hundreds of feet, or GPS, which is more precise but uses a lot of power. iTraq instead splits the difference and relies on cellular radio technology components from GeoTraq. Cellular location tracking is more power-efficient than GPS, but boasts a range of miles. But the heavy lifting is done by iTraq’s own server, which can match cell towers’ IDs with their locations.

At any given moment, “the device itself doesn’t know where it is,” iTraq co-founder Roman Isakov told me. “It wakes up, scans, transmits data, and goes to sleep again. On our server, we can read this information from the device and understand what towers it scanned and where it is.”

Of course, there are also tradeoffs. For one thing, cellular location is far less precise than GPS, so while it can provide you a general idea of where the tag is located–such as if your car is at home or at work–it’s probably not a good solution for finding your keys inside your house. The precision of cellular location technology also depends on how many towers it can detect: Isakov said that in a denser urban environment, with many towers, iTraq can achieve a better idea of where it is than in a rural environment where towers are few and far between.

To combat cellular networking’s somewhat power-hungry ways, iTraq checks in only at a user-specified interval, though you can set schedules to increase or decrease that interval depending on time of day; the less frequently it checks in, the longer the internal battery lasts. “Most of the time, it’s in a deep-sleep mode and almost does not consume any energy,” Isakov said, adding that the battery is still pretty hefty, taking up 30 percent of the device. That sleep mode means it’s not ideal for real-time tracking, but rather for finding out if something–your car, your bike, even your child–is where you expect them to be.

But, iTraq also has the benefit of being useful worldwide, since it relies on the common GSM cellular networking standard. It doesn’t matter which GSM providers own the towers; iTraq can scan any and all of them, in the same way that your laptop or smartphone can “see” all available Wi-Fi networks, even if you can’t join them. That means pretty much anywhere there’s cell phone service, the iTraq can locate itself. So next time you’re headed out for an international trip, you can slap one of these on your luggage and make sure your suitcase doesn’t leave the airport without you.

Because of the deal that iTraq’s struck with its undisclosed cell provider, it doesn’t charge any extra money for the service for its tags: $49 upfront powers your iTraq for life–or at least until its battery runs out, which Isakov says should be 1500 communication cycles. iTraq’s in a crowdfunding stage now, but expects to ship its first devices in June; a subsequent version, currently in development, will feature a rechargeable battery, but for now you’ll have to toss yours when you’re done with it.