Vehicles with no one on board will follow the leader. 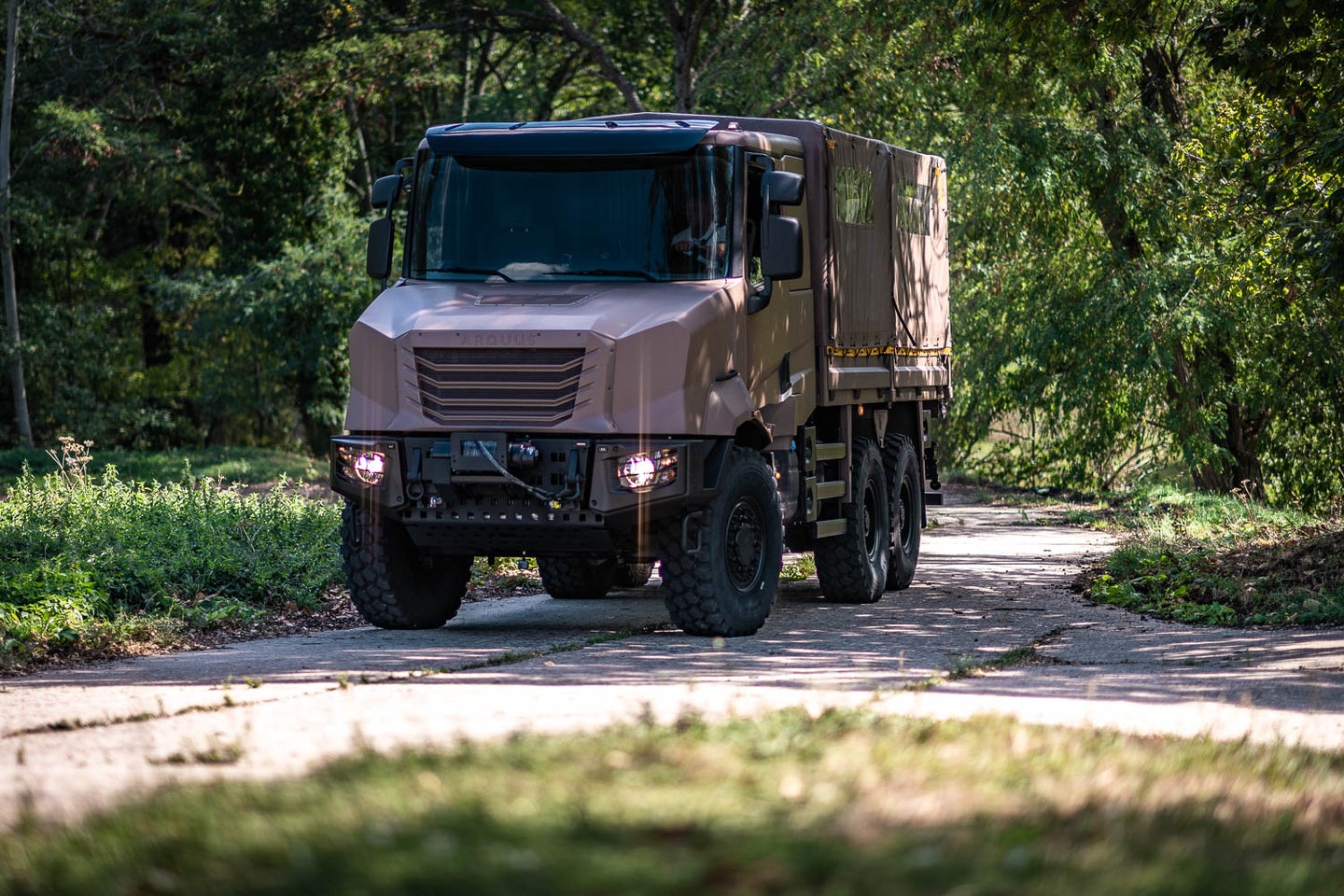 The family of trucks was revealed for the first time in mid-September. The 8×8 and 6×6 versions are ready to go, with just a few things still awaiting evaluation. (Those numbers refer to the number of tires the vehicles employ, with a 6×6, for example, having three on each side.) The 4×4 version is still under development. These trucks are built using the normal technology one would expect of a modern, civilian vehicle—but there is much else at work as well.

Joan Gibert, strategy manager for trucks at Arquus, says the basic design premise for the line was to “take robust parts from the civilian line of heavy duty trucks and adapt and militarize them.” She explains that the side member—that’s one of the long parts of the truck’s frame, on the sides—of a heavy duty truck, for example, “is already hyper-strong for use on difficult terrains,” but that these have been further strengthened “because a military truck needs to remain stable in sand and mud.” At the same time, she adds, “given that these trucks may be used in hostile zones, they must be able to move with great agility.”

The Armis 6×6 has an 11-liter, 460-HP diesel engine, the same that powers the French Army’s new Jaguar armored reconnaissance and combat vehicle. The Armis 8×8 has the 13-liter version.

The very big, run-flat tires—I stand 5′6″ tall and the tires reached almost up to my shoulders!—allow the vehicles to ford through water 4-feet deep, clamber over 20-inch walls and drive up roads with a 50-percent grade. (That’s very, very steep.) “This is the kind of mobility that a standard truck doesn’t have,” Gibert remarks.

The “ultra-low crawler” option on the gearbox allows the driver to stop and start safely on slopes. When they have to drive down the other side, the driver can push a button to engage the automatic brake assist, which saves wear and tear on the main brakes. “It is extremely important for our clients that the driver have control on-board,” Gibert says. Thus, automatic options can always be turned off. On a civilian 4×4 vehicle, for example, drivers can switch from four-wheel drive to two-wheel drive. That was previously impossible to do on 6×6 or 8×8 vehicles, which always had all their wheels engaged, but Volvo developed an opt-out option for trucks in order to save wear and tear on tires and to save fuel. As Arquus has access to Volvo’s R&D, the Armis trucks can do the same; a 6×6 can become a 4×6, with four of the six wheels providing traction.

Other things you may have on your personal vehicle, such as an Advanced Driving Assistance Systems (or ADAS), an Anti-lock Brake System (ABS) and its cousins the Electronic Stability Program (or ESP), and Automatic Traction Control (or ATC), also are found on Armis.

The shape of the truck cabin will seem ordinary to U.S. eyes because it has a hooded engine with the cab set back. But in Europe, where cab over engine (or cabover) is the norm, it stands out. “We chose this shape for several reasons, but the main one is that the hooded engine allows the cab to be lower than in a cabover, and so Armis can be transported by train and fit through the tunnels,” she says.

The driver’s cabin can be a “soft,” unarmored one, or can be STANAG 4569 (that’s a NATO standard) compliant ballistic, mine, and anti-IED protected cabin. “From afar and for an untrained eye it would be hard to tell the difference between the armored and soft versions,” Gibert noted. Apart from the driver, two others can sit in the cabin.

On its roof the armored version can bear the 441 pounds of the Hornet gun turret, Arquus’ first venture into lightweight gun turrets. The weapon is controlled from inside the cabin, which is also where you’d find the latest in military communication and information systems, ensuring that the Armis fits into a network-centric warfare operation.

The trailer payload can be changed, a bit like Lego bricks, depending on the mission. It can either be equipped to transport troops “safely and comfortably,” Gibert stresses, or to carry containers, or pallets, or whatever else the army wants to transport.

Those in charge of maintenance should have their tasks made easier by Health and Usage Monitoring Systems, or HUMS. These are sensors on the key components of the truck that can predict when a malfunction is likely to occur. This should help the client keep a maximum number of trucks on the road at all times as sudden breakdowns will be hopefully minimal.

Most extraordinary, however, is that a convoy of Armis trucks may only require one driver in the future. Not one driver per truck—just one driver, in the lead truck. The other vehicles will follow. “This will not work via Wi-Fi, nor by GPS,” an Arquus spokesman explained. “Because these trucks will often be deployed in zones not covered by Wi-Fi and an army cannot be dependent on a satellite navigation system supplied by a foreign power. So we had to come up with something else.”

Each truck follows the one in front of it. So what happens if the truck in front breaks down, or, worse, is blown up by enemy fire? Then the guidance system switches to follow the next truck up the line, which is still moving.

Arquus says this automatic convoy system works not only on real roads, but also cross-country. “There is actual interest and an increasing demand for those capabilities,” the spokesman says. That’s because experience has shown that it is the logistics personnel, transporting supplies, who run the biggest risks of coming under attack in combat zones.