Video: How to Make a Truck Jump 332 Feet

On Sunday, May 29, Tanner Foust broke a world record by jumping his 875-horsepower racing truck 332 feet. Here’s how it was done 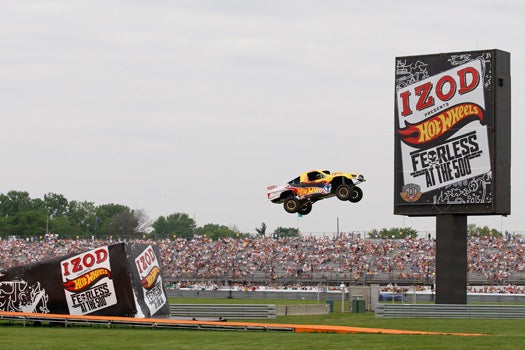 When I talked to Tanner Foust a few days before he attempted to break Johnny Greaves’s 2009 four-wheel jump record of 301 feet, there was one question I had to ask: Really? The three-time X Games gold medalist, Hollywood stunt driver (Fast and Furious: Tokyo Drift, Dukes of Hazzard, Bourne Ultimatum) and host of the History channel’s Top Gear USA laughed. “Yeah. Why are we doing this? It looks daunting on paper, but when you break down the science – certain miles per hour over this distance, ramp like this – you just make sure you hit that mark and let physics do its job. For a jump like this, it’s all just science.” 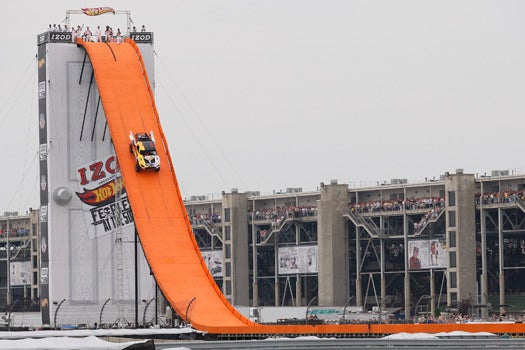 At the bottom of the 100-foot, 45-degree roll in ramp, car and driver experienced nearly 3 Gs of force.

Designed like the Hot Wheels set you had in your childhood bedroom, the bright orange plywood roll-in track hangs down at 45 degrees from a 100-foot tall door erected in the Indianapolis 500 infield. From there the track flattens out for nearly 90 feet, then the takeoff ramp climbs 10 degrees, launching the vehicle. The angles were determined in part by the length of the stunt, the type of truck and to ensure that within the confines of Indy Foust would have 275 feet after completing the jump to brake to a halt before hitting the wall. (In practice it took 250 feet to stop. On record day he turned out in the sand trap.)

After takeoff, the truck must clear a 200-foot gap before landing more than 100 feet onto the landing ramp. At the height of its arc the truck is about 35 feet above ground. It clears the landing ramp by about ten feet as it descends.

After clearing a 200-foot gap, Tanner Foust destroyed the standing world record for a four-wheel jump by 31 feet.

Foust’s RPS custom off-road racing Pro-2 truck has an 875-horsepower Chevy aluminum block engine and a turbo 400 transmission. The suspension system can give or take up to 18 inches to accommodate a hard landing or spring on a takeoff, which has a critical effect on the pitch of the vehicle in that moment of takeoff when the front wheels have left the ramp, but the back tires are still on it. Foust and the Hot Wheels team tightened the valve that releases oil into the shock casing, limiting the flow of oil and slowing the rebound of the springs so that the tires don’t extend out as quickly. This keeps the rear wheels from pushing the nose of the truck down as it goes airborne.

The team also modified the hood for optimal aerodynamics. Giving it a much lower hood line and huge vents encourages air to pass over and through the hood, resisting the tendency for air to get under the hood and make the truck back flip. Videotaping the movement of streamers attached to the hood during practice, Foust learned that air trapped under the hood could push the truck nearly vertical in under two seconds, dropping it on the rear bumper.

To get into position, the truck is winched up the roll-in track backwards, with Foust inside, hanging from his seat belts. “You get to the top and you can’t see the ramp below you and there are no guardrails,” he says. “The hardest point is when they release the winch. You’re at the top of a 10-story building and all you can see is this little take-off ramp and somebody says ‘drive off the end of the world.'”

Rolling slowly and carefully down the 16-foot-wide track, Foust feathers the throttle, dropping to second gear, aware that with little grip on the painted plywood there is a tendency to lose traction and start a potentially dangerous wheel spin. He has to reach 65 mph at the bottom, where the ramp angle changes and nearly 3 Gs push on the vehicle as he pops the truck into third and “flat-out drag races” to 103 miles per hour over the 90 feet to the edge of the ramp. Every mile per hour is worth about seven feet of distance. Just before take off he backs off to 60 percent throttle, which puts the nose of the truck in just the right position for flight.

In the four seconds he’s in the air, there’s little Foust can do to alter the vehicle’s trajectory. If the nose is too high he can hit the brakes, transferring energy from the rotation of the 400-pound tires back into the body and pulling the nose down. Accelerating, on the other hand, can minutely adjust the nose upward.

“In a perfect world as a driver I would like to have something like this take all of my technique out,” says Foust. ” I would like to drive 100 percent throttle so there is no technique needed from me – so I can’t mess it up. For this that wasn’t possible.”

As it flies over the gap, the truck loses about 10 mph due to wind resistance. A 15 mile-an-hour tail wind might drop the necessary target speed three mph; an equal headwind would require 3 mph more. If the head- or tailwinds reach 10-15 mph, the team has to decide whether to postpone a jump like this.

On the day of the stunt, Jesse Olson, the lead producer from Laissez Faire Presents, the event coordinator, took wind readings from a weather station, factoring velocity and direction into the driver’s target speed. In the days leading up to the event, as rain and tornadoes hammered the Midwest, Olson and his team used gas heaters and industrial blowers to heat the track to dry it off.

“The jump can’t happen if there’s any moisture because traction’s such a crucial part,” he explains. “We have to use every foot to get up to the target speed.” The artificial ramp has more traction that dirt when dry, “but with just a little moisture it turns pretty much into ice.”

Fortunately for the team, the weather held out Sunday, providing Foust with a clean, dry track on which to pummel the old world record.

Of the experience, Foust puts it simply: “It’s really cool. And it takes all of 11 seconds.” 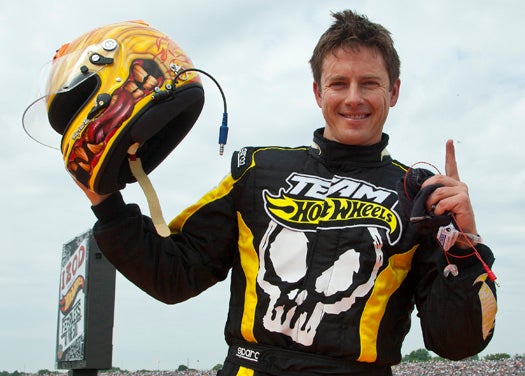 Record setter Tanner Foust ran about 20 practice jumps before his attempt at Indy Sunday, making adjustments to speed, the truck body and suspension along the way. “You have to get technical to go fast,” he says.
Physics
Vehicles