With an icy heart. 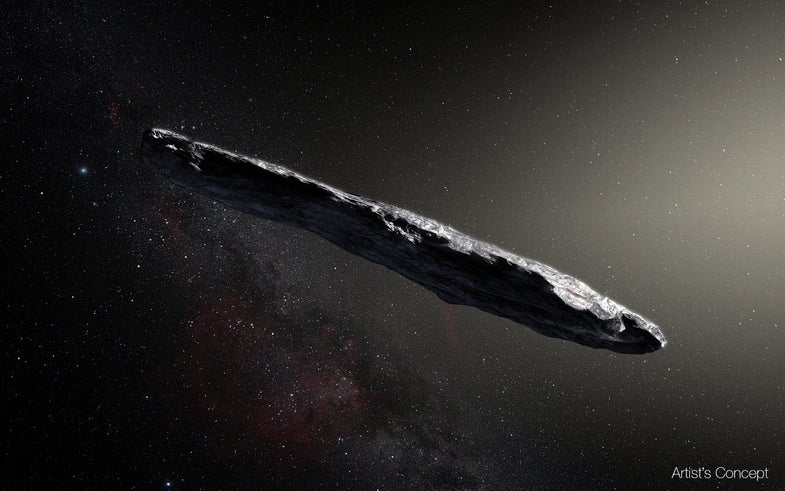 It’s only been two months since astronomers first spotted the long, thin object hurtling through space, coming in at an angle that could only mean one thing: it wasn’t from this solar system, and it wouldn’t be coming back.

The weird object now has a name—’Oumuamua—but we’re still not entirely sure what it is. Yes, last week researchers at the Green Bank Observatory in West Virginia checked to see if it was an alien spaceship, but they didn’t find anything artificial about the oddly-shaped object.

That doesn’t mean it’s not weird. And we still don’t know what it’s made of. A new paper published this week in Nature Astronomy presents some intriguing ideas.

Initially, astronomers thought that ‘Oumuamua might be a comet. But unlike a comet, it didn’t release a trail of gas and dust, which it would have if there was ice on its surface. So, then they thought it might be more like an asteroid, dominated by metal and rock instead of ice, and likely formed in the warmer inner area of a distant solar system instead of the icy outer reaches.

This new research, however, suggests that ‘Oumuamua might have a frozen heart, encased in a soft coat of carbon-rich gunk soft enough to sink under your boots.

This isn’t the first paper written about ‘Oumuamua, and its not going to be the last. Researchers continue to comb through the data that they were able to glean from the object as it dropped by, and they continue to watch as it recedes into our horizon. There will be other papers exploring ‘Oumuamua’s composition, Its flight path, and a whole host of other tidbits. Some of those papers might contradict each other as scientists sort through data and ideas to get at the heart of the matter: what was this thing?

Alan Fitzsimmons, the lead author of the new paper, says that they still aren’t sure what the texture or strength of the dark, reddish material is. But he and his colleagues think that the outer layer probably formed as organic ices (think CO2 instead of H2O) broke down under a bombardment of cosmic radiation during ‘Oumuamua’s millions of years in interstellar space.

The coating grew over the course of about 100 million years, becoming about a foot and a half thick. It’s now robust enough to shield the icy heart within from the heat of a star like our own, even when passing within the scorching orbit of Mercury.

“The temperatures within the interior never got warm enough to melt any ice down there, even though it passed close to our sun,” Fitzsimmons said in an email. “That does not mean there is definitely any there, but ice could survive if there is any.”

Fitzsimmons says he was able to get these observations of ‘Oumuamua (now moving away from us at 27 miles per second) “by dropping everything (including breakfast) and writing telescope proposals as soon as the object was announced.”

But as fast as he was able to move, gathering data from telescopes in Chile and the Canary Islands, there are still more questions than answers when it come to ‘Oumuamua.

“Is there really water ice inside? What is the interior structure really like? We’ll probably never know for sure with ‘Oumuamua, but another one will be spotted at some point in the future,” Fitzsimmons says. ”Hopefully we will have more time to study the next one.”

Fitzsimmons hopes that he and his fellow researchers will soon be able to use the land-based Large Synoptic Survey Telescope (currently under construction in Chile) to find more objects like ‘Oumuamua, and that then the space-based James Webb Space Telescope (hopefully to be launched in 2019) and other large observatories will be able to study those objects in detail.