Math, Art, and Origami at MIT 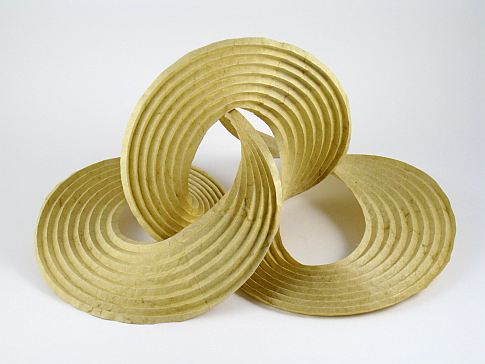 In the computer science lab where they work at MIT, Erik and Martin Demaine have a three-foot-tall metal and plastic sculpture that resembles a sleek, modernist version of a child’s Tinkertoy creation.

Erik, a math prodigy who was honored in Popular Science‘s second annual Brilliant 10, and his father Martin, an artist who was drawn into math through his son, built the piece by starting with a three-dimensional hexagon they folded from paper. They then inputted the shape into a computer and virtually erased all of the paper, so that only the creases remained. Next, they turned back to the tangible and created a dynamic piece of art, using aluminum rods, locked together at the joints with plastic spheres, to represent each crease.

“We took something real and virtualized it, and then made it real again,” explains Martin, 66, an MIT instructor and artist in residence.

They also took art, turned it into math and then back into art again. This belief that math and art are complementary endeavors is the key to the Demaines’ work. The men use complex mathematics to create beautiful art, some of which is on display at the Museum of Modern Art in New York City. And they construct sculptures to help solve seemingly intractable math problems. Along the way, the lively and often goofy duo have inspired students to think more creatively about their discipline, and have shown the public that math doesn’t have to feel inaccessible.

“We view them as very similar things,” says Erik, a 28-year-old assistant professor, referring to math and art. “They’re both creative processes. They’re both about having the right idea.”

The Demaines have worked in metal and glass, but are focusing mostly on paper these days, creating swirling, fluid sculptures by folding along curved creases in corkscrewed pieces of paper that are attached at the ends. They don’t yet understand why the paper responds the way it does, so they alternate between the blackboard where they scribble out equations, the computer where they work with models, and reams of stiff brown paper that they score with a laser cutter and then fold by hand.

“Mathematically, it’s not even clear what the right questions to ask are,” Erik says of the curved creases, which are at the cutting edge of folding research.

They turn to sculptures when they’re stuck on a formula, and by making incremental changes in the size and shape of the creases, patterns start to emerge. Several of their paper sculptures, including the series of three at MOMA, started as studies in the lab. They’ve begun making progress on the mathematics to prove that the shapes they’re folding can actually be made with the crease patterns they’re using.

This may seem like a strange goal — proving you can make something you just made — but the Demaines have proven just the opposite before. After 10 years of research, they proved earlier this year that a curved shape called a hyperbolic paraboloid, which they and others had been folding for years, doesn’t actually exist.

“The paper is cheating somehow,” Erik explains. Extra creases they can’t see must be sneaking into the paper while it’s folded, because the math now shows that it’s impossible to make a 3-D shape using only the creases the Demaines thought they were using.

While both men are mathematicians and artists, they have clear specialties. Erik is the math genius, having joined MIT at 20, making him the school’s youngest professor ever. His interest in folding and origami led to a MacArthur “genius” grant, dozens of papers, and a book. His research on folding goes beyond paper, such as trying to figure out why proteins fold the way they do and studying the best way to collapse robotic arms.

Martin started as a professional artist and home-schooled Erik as they traveled around their native Canada and the United States until Erik started college at 12. Martin figured Erik was a little young to leave him on his own, so he audited Erik’s classes. This helped hone Martin’s own understanding of folding, which had been a hobby of his for years.

Knowing that the men were inseparable, MIT sweetened its job offer to Erik by giving Martin a two-year position as a researcher in the computer science department. If he could prove that he was a valuable resource to the school, he could stay on. He did, and in addition to collaborating with Erik on mathematical research, he’s now the department’s first artist in residence.

The men are known as exuberant teachers, and are favorites among computer science and math students, as well as architecture, engineering and biology majors who often take their classes.

“The students are just overjoyed,” says MIT architecture associate professor John Ochsendorf. The Demaines are infinitely creative and love to have fun. Erik is known to crack corny jokes mid-lecture. (There are three kinds of mathematicians: those who can count and those who can’t.) And Martin has the curiosity of a child, constantly wondering aloud whether he can create new, interesting sculptures, such as an entire, usable bedroom set he made out of old books.

“If I could sum them up in only one word I would say ‘playful,'” Ochsendorf says.

He describes a challenge that Erik and Martin proposed: to design a brick building façade that looks like a face, but as the sun crosses the sky throughout the day the face transforms from a baby into an elderly person.

That idea, just like the Demaines’ sculptures, comes from a desire to make something beautiful that is based in hard-core mathematical exploration, Ochsendorf says. “It’s all about having fun,” he says of Erik and Martin’s work. Yet, “what comes off as playful is backed up by tremendous understanding and tremendous rigor.” 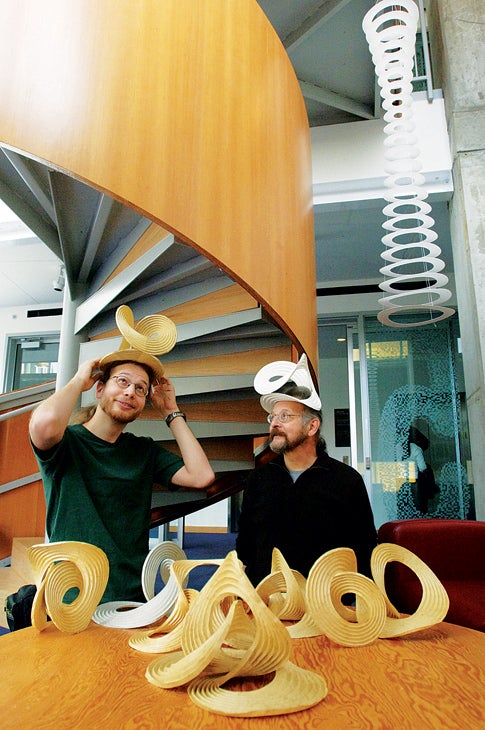 Erik Demaine, left, and his father, Martin Demaine, model a couple of their sculptures. Their work is currently on display in New York at the Museum of Modern Art’s show “Rough Cut: Design Takes a Sharp Edge“. Erik Demaine was an honoree in PopSci’s second annual “Brilliant 10.” Read Emily Stone’s profile of the Demaines. 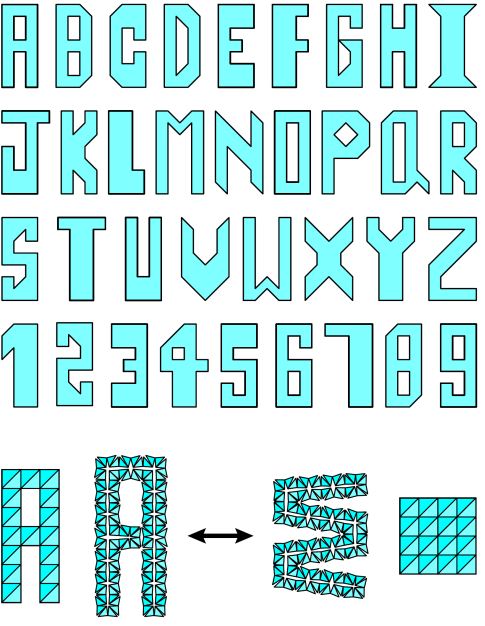 Erik and Martin wanted to create a font that was connected to mathematics. There had been an open problem in the math world of whether a full alphabet could be made using a “hinged dissection,” meaning a series of flat shapes that are linked together but moveable at the joints. The Demaines were the first to come up with a solution, when they created this alphabet in 2003 that is made from 128 linked triangles. This led to their proof last year — done in collaboration with students Timothy Abbott, Zachary Abel, David Charlton, and Scott Kominers — that any collection of flat shapes of equal area can be made from a single hinged dissection. 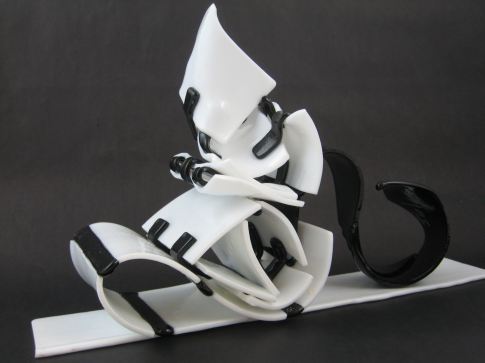 Glass is much trickier to fold than paper because it’s too hot to touch when it’s pliable. So they rely on gravity to do the folding for them. The black glass in this piece is softer, and heats up and folds faster. The men linked the black and white glass together before heating it to 1,200 degrees Fahrenheit to create the folds. This is the first piece in a series they started last year with MIT biological engineering student Amy Nichols. Next up, the men are hoping to start combining glass and paper in sculptures. 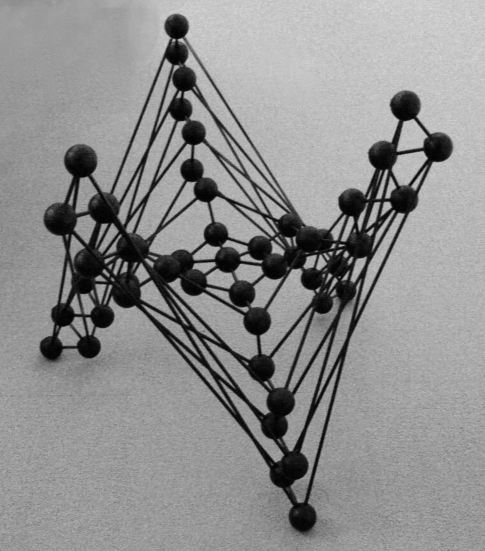 This one-meter sculpture is the model for a 10-meter one they’d like to make. The Demaines, along with former MIT architecture student Jenna Fizel, created it by taking the shape of a folded paper hexagon and inputting it into a computer. They then erased all of the paper on the screen, leaving only the crease lines. After that, they returned to the real world and used aluminum rods to represent those crease lines and plastic spheres to attach the rods at the joints. 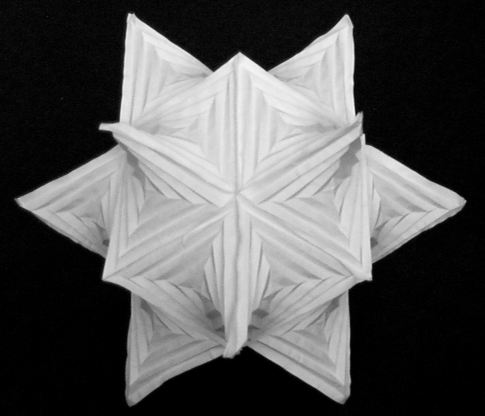 This paper sculpture doesn’t exist according to the Demaines’ calculations. It’s a series of hyperbolic paraboloids linked together, which they dubbed a hyparhedron. The individual curved paraboloids in it have been folded by people for decades, but Erik and Marty proved earlier this year that you can’t create a 3-D object based on the crease lines they were using. Somehow, miniscule creases are sneaking into the paper, allowing it to open. When the men made this sculpture in 1999, which was displayed at Southwestern College in Kansas, they still thought the shape existed. The sculpture was made along with Anna Lubiw, a professor at the University of Waterloo. The proof that the shape “doesn’t exist” was done in collaboration with students Vi Hart at Stony Brook University, Greg Price at MIT, and Tomohiro Tachi at the University of Tokyo. 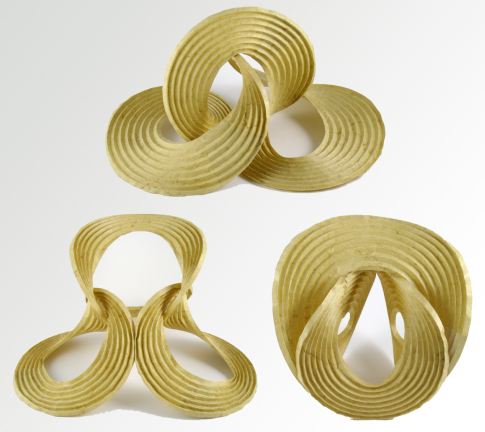 This series, titled “Computational Origami,” is on display at the Museum of Modern Art in the exhibit “Rough Cut: Design Takes a Sharp Edge.” Erik and Martin wanted to represent the idea of infinity in the sculptures, which they made by folding curved creases in thick paper called elephant hide, which started out as a corkscrew with the two ends attached. By making small changes in the size and shape of the creases, the men started to be able to predict how the paper would react. But they still have very little understanding of why the paper shapes itself as it does once the creases are made. 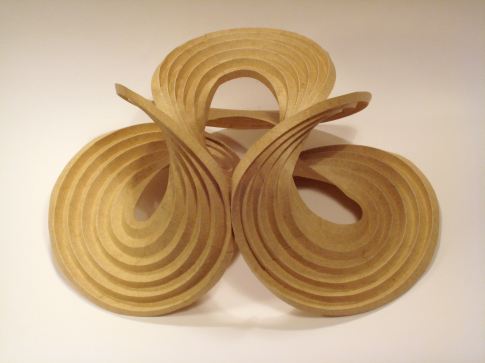 Erik and Martin made their “Wave” series this spring in Belgium, where they are on sabbatical. They had to revert to low-tech equipment because, unlike at MIT, they have no laser cutter there. So they used an inkless ballpoint pen as the embossing tool, pressing down into impressions they’d made in plywood to create the crease patterns. Working by hand has made them more aware of how the paper reacts to different patterns, they said. This two-foot-tall piece called “Splash” reminds Martin of waves he saw crashing in Barbados. 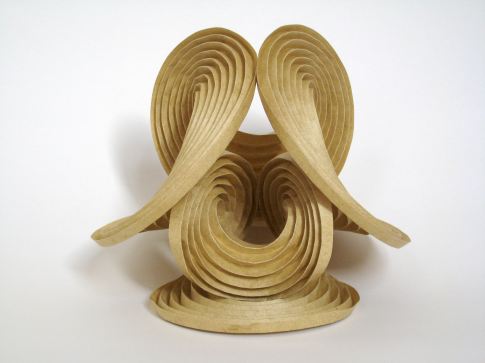 This is part of a series that will be on display at the Peel Gallery in Houston this fall. They’re modular pieces that are made by gluing together several of the curved crease pieces. This is a two-foot model for what they hope will be sculptures that reach up to 10 feet high.
arts
folding
mathematics
MIT
origami