New research confirms a theory: high-frequency acoustic waves can be converted to light 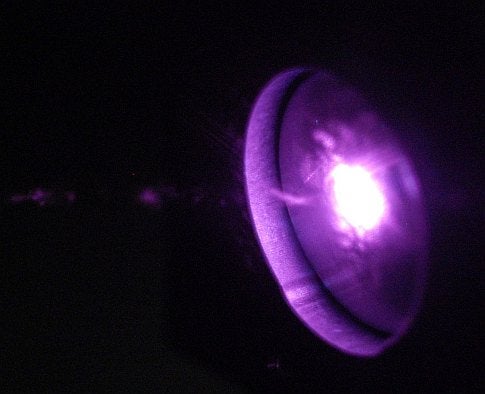 This shows "a laser impacting a target like the ones that we utilized in our experiments.  The glow is hot plasma that is produced by the laser.  The laser pulse produces the high-frequency acoustic wave that propagates through the piezoelectric thin films, generating THz radiation.". Ki-Yong Kim, Los Alamos National Laboratory
SHARE

Researchers at the Lawrence Livermore National Laboratory in California successfully converted sound waves to light radiation by reversing a process that transforms electricity to sound, which is commonly used in cell phones. This is the first time that sound has been converted to light. The findings, which were published this week in Nature Physics, could improve how computer chips, LEDs, and transistors are made, and also have applications in ultrafast materials science and terahertz radiation (T-ray) generation.

The research team initially predicted that the conversion was possible around a year ago, using computer modeling, and has been trying to confirm it in the lab ever since.

They used a piezoelectric material, whose intrinsic properties allow it to convert electricity into sound, or movement into electricity, and which is used in speakers and sonar transducers on submarines. In the study, the researchers sent a very-high-frequency sound wave, with a frequency around 100 million times higher than what humans are capable of hearing, through the piezoelectric material, which converted it into electrical signals. The electrical signals gave off radiation, or light waves, in the terahertz frequency.

According to Evan Reed, one of the authors of the study, converting sound to light itself is novel, because there is only a very narrow frequency range — around 100 GHz to 10 THz — where sound and light waves overlap.

The findings provide a new possible method for creating or studying several technologies, according to Reed. One application might help build better electronics. Electronics manufacturers such as Nitronex Corporation, which donated the piezoelectric materials used in the study, make devices grown out of gallium nitride (GaN) and aluminum nitride (AlN), which are grown on a substrate and consist of layers of very thin films.

One complication in this manufacturing process is determining the exact composition of the film — even the thickness of each layer of the film is hard to measure, because it is so tiny. But accurate thickness is important, because some electronic devices require a specific thickness for each component of the film. In the new research, the scientists sent acoustic waves through a film consisting of GaN and AlN layers, and were able to measure the thickness of the layers by measuring the time that it took for the acoustic wave to convert to radiation.

The T-rays from the process may also help researchers in the field of ultrafast materials science, which aims, among other things, to understand what happens to materials in the short time frame that follows ultrafast (on a sub-nanosecond scale) processes, like metal melting after being hit by a laser. And finally, while it wasn’t the main goal of the study, the findings may yield a new way to generate T-rays, which are somewhat difficult to generate. T-rays can detect a variety of weapons and explosives, and may have applications in medicine, for example, in skin cancer-detecting devices.