Scientists just spotted a massive storm from a sun-like star 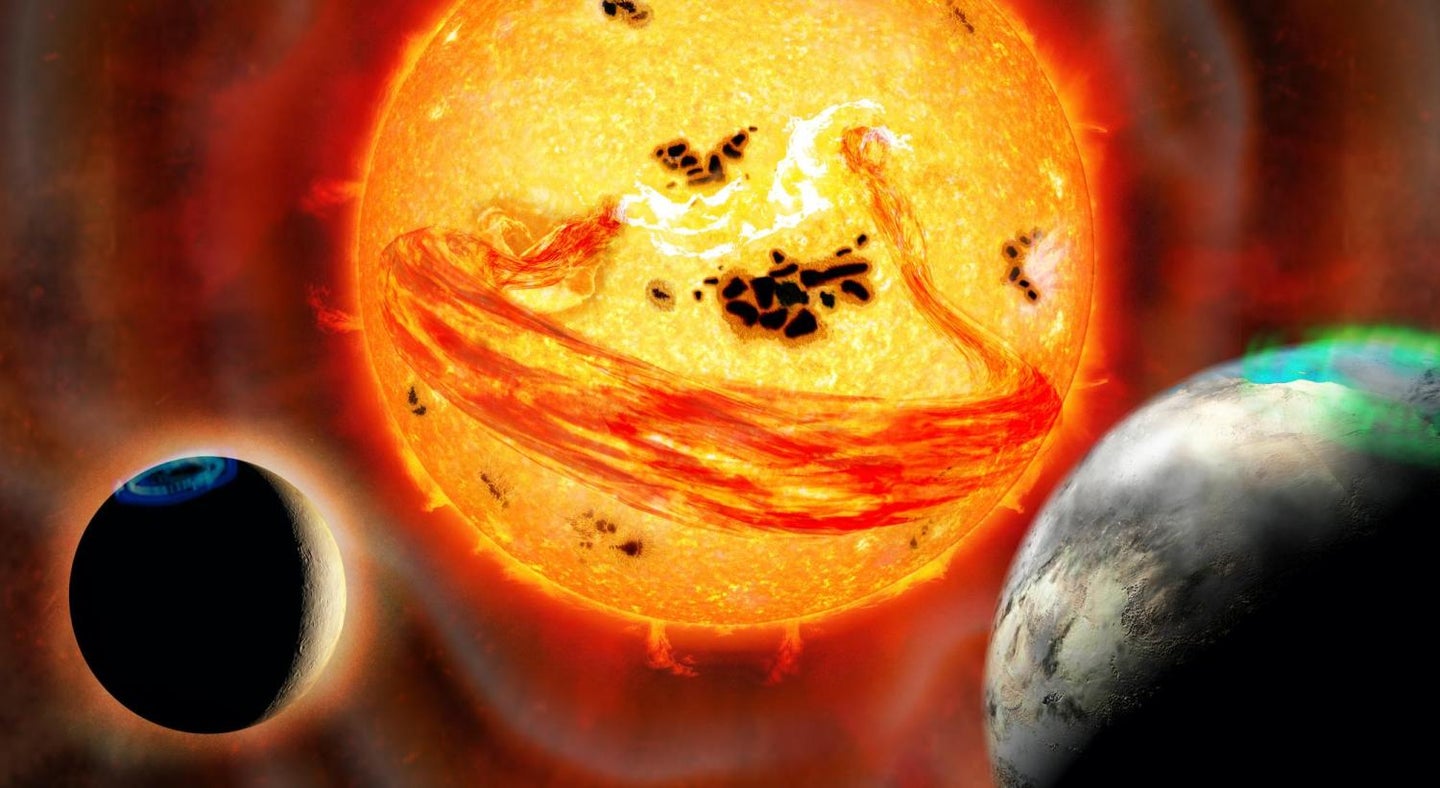 Scientists observed EK Draconis as it hurled a burst of plasma into space that proved more massive than any previously recorded for a sun-like star. Credit: National Astronomical Observatory of Japan
SHARE

The young star EK Draconis, which lies 111 lightyears from Earth, is about the same size and temperature as our own sun. However, it’s currently a much more turbulent place, a new report indicates.

Scientists observed EK Draconis as it hurled a burst of plasma into space that proved more massive than any previously recorded for a sun-like star. Our sun may have had similarly powerful storms in its past, which could have left their mark on Earth and its neighbors, the researchers concluded on December 9 in Nature Astronomy.

Our sun periodically gives off explosions of radiation known as solar flares. The flares are sometimes accompanied by eruptions of superheated matter, or plasma. These events are called solar storms or coronal mass ejections. Occasionally, the clouds of plasma reach Earth’s magnetic field to interfere with satellites and cause blackouts; in 1989, the entire power grid in the Canadian province of Quebec was taken out by a solar storm.

But our sun has calmed down a lot over its 4.6-billion-year lifespan, says Yuta Notsu, an astrophysicist at the University of Colorado Boulder and coauthor of the study.  Previous work by Notsu and his colleagues indicates that particularly impressive “superflares” are most common in young, rapidly rotating stars but may occur once every few thousands years or so on older stars like our sun.

“The sun is an average middle-aged, boring star; the flares aren’t really that energetic,” says Damian Christian, an astrophysicist at California State University Northridge who was not involved with the research. “We can study more active stars [and] we might apply what we learn from them to the sun.”

Enter EK Draconis. The star is a sprightly 50 to 125 million years old and can offer a glimpse of what the sun might have looked like billions of years ago.

Notsu and his team observed EK Draconis from January to April 2020 using observations from ground-based telescopes as well as NASA’s Transiting Exoplanet Survey Satellite. On April 5, the star lit up with a large superflare. Shortly afterwards, the researchers detected a distinctive shift in the wavelengths of light picked up by the telescope. “From this we can conclude that a large amount of plasma is away from the star moving towards us,” Notsu says.

He and his colleagues estimated that the plasma bubble was traveling at speeds up to roughly a million miles per hour and had a mass 10 times greater than the largest ejections from our sun.

[Related: Violent space weather could limit life on nearby exoplanets]

The researchers make a good case for the telescope observations being explained by a coronal mass ejection coming from EK Draconis, Christian says. “It’s a very nice result,” he says.

Although the findings are interesting, says Rachel Osten, an astronomer at the Space Telescope Science Institute and Johns Hopkins University, “What would be more convincing is multiple events…and maybe multiple methods that are showing these kinds of results.”

In the future, Notsu and his colleagues plan to search for more stellar outbursts and to track what happens to the plasma as it moves away from the surface of its star. “We only detected an initial phase,” he says. “We don’t know how it evolved.”

Still, he says, the coronal mass ejection that he and his team observed can help scientists understand how these storms unfold on distant stars and our sun. It’s possible that plasma erupted from the ancient sun damaged Mars’s atmosphere, which today is much thinner than that of Earth, Notsu speculates.

Stellar storms could have a big impact on whether a planet becomes habitable, Osten says. If the plasma reaches a planet’s magnetic field, its destructive effects can leave the atmosphere vulnerable to harsh ionizing radiation.

Just because a blob of plasma is flung away from a star doesn’t mean that it’s going to hit one of the planets orbiting that star, though, Osten acknowledges. Still, she says, coronal mass ejections highlight how important it is to consider what goes on beyond a potentially Earth-like planet’s atmosphere when searching for alien life.

“This line of investigation is telling us that it’s all interlocked,” she says. “You can’t just focus on the planets, you’ve got to understand the stars because they’re an important ingredient in that recipe for what can make life.”