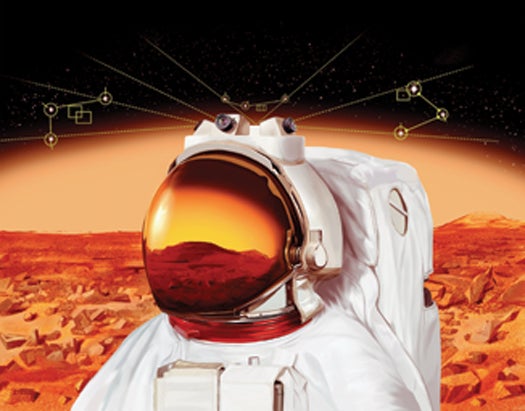 It will probably take another decade to perfect the sophisticated rocket and life-support technology needed to put a human on Mars. But once we’re there, NASA may use centuries-old technology to keep us from getting lost during a stroll.

Apollo crews never left sight of their capsule, but explorers will be expected to roam farther on the Red Planet. Mars, however, like the moon, lacks a strong magnetic field to point a compass needle north. This conundrum inspired Richard Speck, the founder of space-tech company Micro-Space, to design a camera system that tracks celestial bodies for personal navigation cues. It uses the same principle as the sextant, the sun-mapping tool invented in 1731 for sailors to plot their course.

Four die-size cameras sit on an astronaut’s helmet so that each points in one of the cardinal directions. The cameras gauge the position of any two celestial objects—including the sun, Earth and stars—and the helmet’s computer provides instant location information to within a quarter of a mile and projects it on a head-up display. The beauty of the system, Speck says, is that unlike a GPS network, it requires no satellites, no transmitters—barely any setup at all. “You could just start exploring,” he says.

Speck recently began making prototypes, funded by a $100,000 award from NASA’s Small Business Innovation Research program. He thinks the military might also have use for the tool here on Earth. Scrambling troops’ GPS signals is Espionage 101, but there’s not much enemies can do to block the sun and stars.