The extragalactic exoplanet has come to the Milky Way 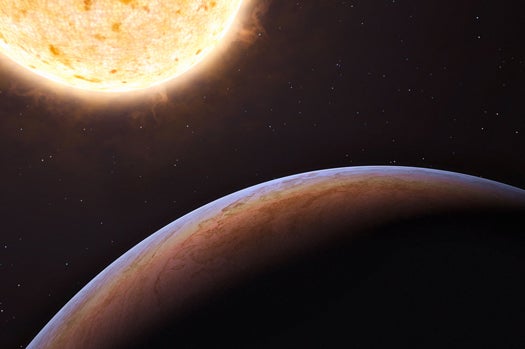 An artist's rendering of HIP 13044 b, an extragalactic planet that now orbits a star in the Milky Way. The star – and the planet – are from a smaller dwarf gallery that was absorbed by the Milky Way billions of years ago. ESO/L. Calçada
SHARE

With all the exoplanet hunting going these days, astronomers have now logged more than 500 planets orbiting other stars in the Milky Way. Detecting planets in other galaxies, however, is still beyond the reach of scientific technology. But researchers have now discovered the next best thing – a planet of extragalactic origins orbiting a star within our galaxy that was deposited there billions of years ago when the Milky Way swallowed up a smaller dwarf galaxy.

The star, known as HIP 13044, resides some 2,000 light years from Earth in a part of the galaxy known as the Helmi stream – a group of stars that belonged to a smaller galaxy that was absorbed by the Milky Way six to nine billion years ago. And the planet – HIP 13044 b, is interesting for a variety of reasons beyond the fact that it’s the first extragalactic planet ever detected.

HIP 13044 b has a minimum mass of 1.25 times that of Jupiter, so it’s a relatively large planet. And it is orbiting really close to its host star, making a full orbit in just 16.2 Earth days. At its closest point during its elliptical orbit, the planet comes within one solar diameter from its star.

It’s hypothesized that HIP 13044 b didn’t always orbit so closely. The planet is unique for study because it apparently has survived its star’s red giant phase, when the star expands to massive size after using up the hydrogen supply at its core. It’s one of only a few exoplanets to have survived this event, and could lend some interesting insights into the fate of our own solar system as our own sun is on pace to undergo its own red giant phase at some point in the future, likely around 5 billion years from now.

HIP 13044 b was likely pulled in closer to its host during this period, when any planets that were inside its orbit were swallowed up by the star. HIP 13044 b might not be long for this galaxy either; the star has collapsed back down as part of its evolutionary cycle, but as it nears the end of its life it will expand again, likely engulfing the planet. It’s a fate our own solar system, and our own planet, likely shares.