How the Trump border wall sapped a desert oasis dry

Ancient springs might not survive unchecked construction during the pandemic. 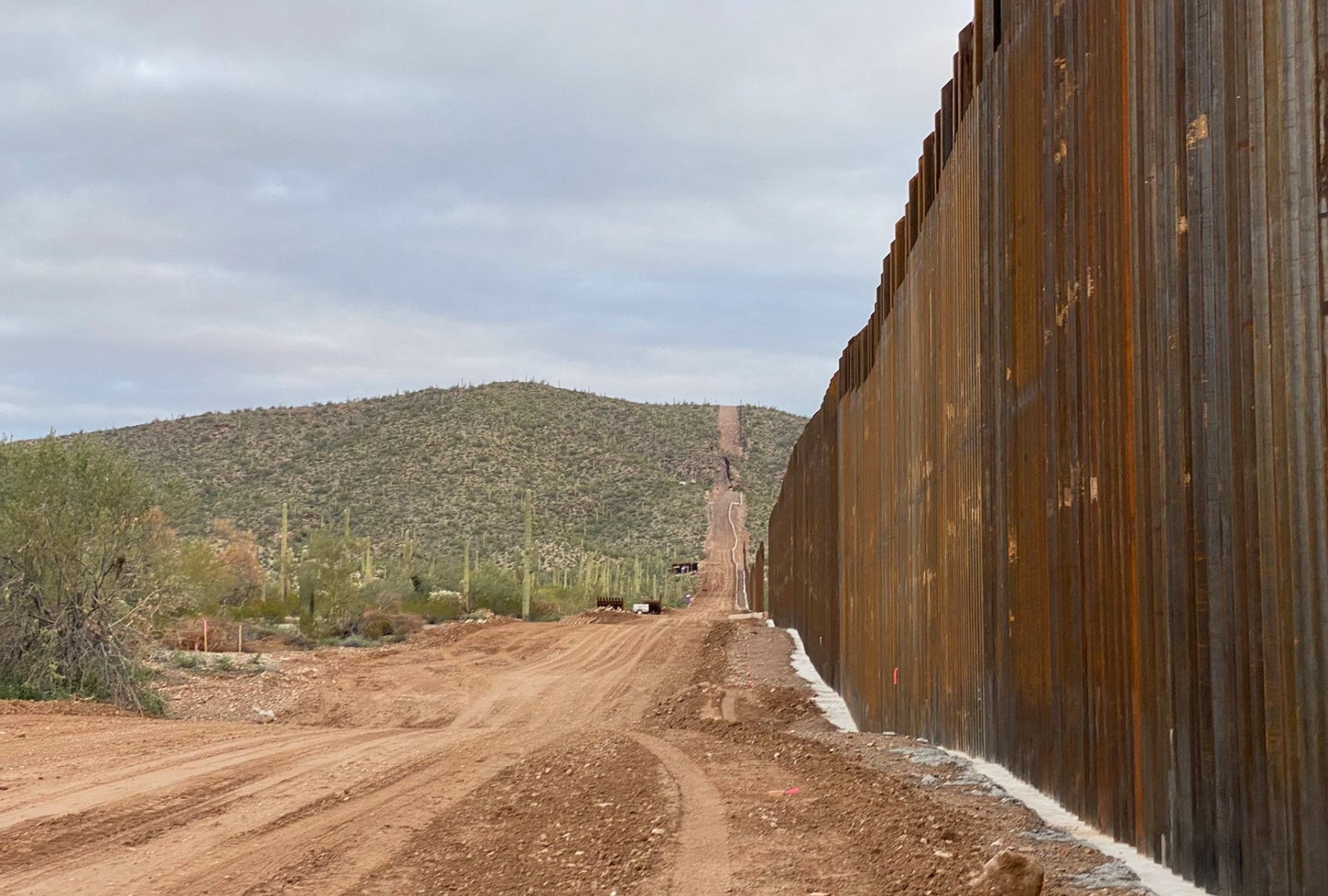 After heavy construction last summer and fall, during which wildlife were cleared and a natural pond was diverted, the US-Mexico border wall now covers the entire southern edge of Organ Pipe Cactus National Monument in Arizona. Laiken Jordahl
SHARE

Amidst the towering saguaro and pronged organ pipe cacti of southern Arizona’s Sonoran Desert, a 30-foot-tall fence snakes through the vegetation, shadowed by a barren strip of land that’s been carved into the mountainsides. Despite the COVID-19 pandemic, there’s been a flurry of activity in these borderlands, particularly in the area’s Organ Pipe Cactus National Monument. In the last months of the Trump administration, a Customs and Border Protection (CBP) construction crew has been dynamiting and drilling their way through nature refuges and cultural relics to make room for the new border wall. A 30-mile-long spine of steel poles filled with concrete now chokes the monument’s southern edge. Mixing the raw materials for this structure requires a lot of water—some 84,000 gallons a day, by CBP’s own estimates—a dwindling resource that’s being siphoned from the already arid landscape.

The 450 miles of border wall in sections of California, Arizona, New Mexico, and Texas have already required more than 971,000 tons of concrete, according to CBP. (About 10 percent of that called for new construction; the rest replaced existing structures.) The demand for water, alongside historic droughts in the West, has had a colossal impact on the surrounding ecology of largely public and tribal lands across the Southwest, which scientists and Indigenous communities fear may take years, if not decades, to reverse.

Near Quitobaquito Springs, located in Organ Pipe, only 600 feet from the border, locals have documented CBP diverting water from the same aquifer that feeds the springs. “Contractors have pumped tens of millions of gallons from a deep aquifer that has what hydrologists call ‘fossil water,’” explains Randy Serraglio, who monitors endangered species and their habitats for the Center for Biological Diversity, a conservation nonprofit. “It’s water that was laid down thousands of years ago. The aquifer is not easily replenished by the scant rainfall we get now, so the damage is essentially permanent.” Once around 2 feet deep and covering up to half an acre, hydrologists and ecologists estimate the pond at Quitobaquito dropped 15 inches during the summer of 2020, and the spring’s flow reached an historic low of 5.5 gallons per minute this past July.

The ecological impacts may be severe. The Quitobaquito pupfish and Sonoyta mud turtle, both classified as endangered by the US Fish and Wildlife Service (USFWS), reside in the spring and nowhere else in the country.

Almost 300 miles away at the San Bernardino National Wildlife Refuge, in the Sky Islands region of southern Arizona, the boggy marshes, tumbling waterfalls, and tree-lined riverbanks of the lush 2,369-acre wetland provide a green oasis within the dry Chihuahuan Desert, thanks to the Río Yaqui watershed.

“A big part of the wall cuts through the heart of the region, which is home to jaguar, ocelot, black bears, mountain lions, and more” says Louise Misztal, executive director of the Sky Island Alliance, a science nonprofit that works to preserve the forested mountains in the borderlands.

Because animals migrate to areas that historically provide them with a water resource, such as the San Bernardino Refuge’s natural ponds, nearby CBP drilling is of particular concern to Misztal, who’s worked as a biologist in the state for more than a decade.

With new wells 8 miles from the spring, which pumps water to ground level, necessary water pressure has dropped during construction. USFWS officials have resorted to manmade pumps to help the pressure return to normal.

Water in several ponds at the refuge—home to endangered fish and rare butterflies, hummingbirds, and bats—dropped to an extremely low level, then disappeared completely, according to USFWS documents leaked to the Center for Biological Diversity in summer of 2020. Citing data gathered between November 2019 and June 2020, USFWS employees warned of the impact of drilling groundwater from wells within a 5-mile radius of the refuge, but the warnings went unheeded.

CBP contractors drew millions of gallons of groundwater from a well just 1.5 miles from the site. As soon as CBP began removing huge amounts of groundwater from the aquifer, the pressure in the system began to fail, “exactly as predicted by scientists,” Serraglio says. “Some ponds dried up and endangered fish and plants, such as the Yaqui catfish and Yaqui beautiful shiner, were killed.”

The threat extends to rivers, too. A segment of the wall has been constructed through the San Pedro River in Arizona, changing the waterway’s hydrology. “There’s not a lot of surface river,” Misztal explains. “Up until now it was a free-flowing river, but they’ve put in a bridge and infrastructure.” The extent of the impact on fish species—such as the endangered Gila chub, the speckled dace, and the Sonora sucker—is not yet entirely clear, Misztal adds, but it will without a doubt change migration and spawning habits. In addition, wildlife that depend on the river as a resource may find their water source has dried up. Monsoons typically recharge low-flowing sections during the summer, but the water may no longer fill up as it once did.

What’s more, the wall construction extends through a region that’s facing its worst drought for 1,200 years due to climate change. Arizona, specifically, has seen record-low rainfalls and snowmelt, and experienced more triple-digit temperatures than in any other year. “Springs and streams are already critically stressed in many places, so the massive pumping is even more damaging,” Serraglio says.

A spokesperson for CBP says that the agency “regularly consults” with tribal governments and wildlife departments to minimize impacts to natural and cultural resources. “Regarding water resources, CBP continues to coordinate with federal land-managing agencies to monitor and evaluate potential groundwater impacts potentially associated with border-wall-system construction,” they added.

However, the Real ID Act of 2005 allows the Department of Homeland Security to supersede existing laws, including the Endangered Species Act, National Environmental Policy Act, and an executive order which requires consultation of tribal governments.

At Quitobaquito Springs, for instance, wall engineers pulled a noticeable amount of water from the O’odham Nation’s sacred pond and also blew up Monument Hill, a site containing some 10,000-year-old artifacts of Apache warriors.

“Construction unearthed pieces of body remains of our ancestors, which now have to be reburied,” says Christina Bell Andrews, district chairwoman of Hia-Ced, a subset of the O’odham Nation.

The park closed all access to Quitobaquito after the protests, clearing the way for Trump to bulldoze his wall through the sacred site.pic.twitter.com/X6MshYlnJ3

Serraglio contends that we don’t yet know the full damage of tapping natural wells and drilling new ones. “The situations at San Bernardino National Wildlife Refuge in far Southeast Arizona and the Organ Pipe Cactus National Monument in Southwest Arizona are probably the most egregious, but there are others,” he adds.

Both Serraglio and Misztal agree the incoming Biden administration needs to take immediate action to survey the damage that’s been done, and prioritize restoration to reverse the damage caused by wall construction. Andrews is co-authoring a letter requesting immediate action. “Joe Biden can stop the construction on Day One, and he must do that,” Serraglio says. “Every day that he waits, this tragedy will continue to unfold in the borderland.”

Biden told reporters last August he would not build “another foot” of border wall, but has yet to address the damage already done. Whatever his plans, Andrews emphasizes the importance of consulting with the O’odham people in how to remedy the destruction. The Trump administration has already secured more wall contracts, largely in the Rio Grande Valley in Texas, complicating Biden’s plan to stop construction.

One way to bring back the ecological and hydrological balance of the borderlands would be to restore the San Pedro River to its original free-flowing state, Misztal says. But in terms of replenishing the springs, she doesn’t know if there’s an easy fix. “Some resources will be changed forever,” she says. “At Quitobaquito, the groundwater is extremely old, and the next 10 years of rain aren’t going to be enough to restore it.” And, although she adds that nature is resilient, the future of the desert’s water sources is less certain.