It’s a nighmarish situation: A gigantic snake slowly curls around your body, enveloping you in its slithery embrace. You begin... 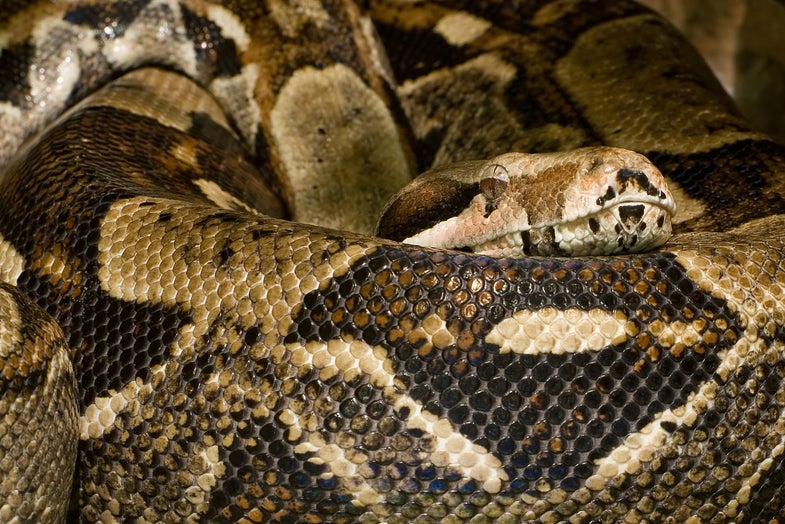 It’s a nighmarish situation: A gigantic snake slowly curls around your body, enveloping you in its slithery embrace. You begin seeing stars, and start gasping for breath. But your life will not end because you’re suffocating. Actually, it’s more like you’re having your insides squeezed shut.

A new study confirms that boa constrictors and other crushing snakes don’t suffocate their prey after all. They cut off blood flow, resulting in rapid organ shutdown and a quick (though likely not painless) death.

About 20 years ago, herpetologist Dave Hardy and colleagues theorized that a crushing snake’s prey dies much too rapidly for suffocation to be the cause. But nobody had tested what actually happens in the body of a crushed prey. Scott Boback of Dickinson College in Carlisle, Penn., set out to prove it once and for all.

In a new study, he and colleagues report measuring blood pressure in rats in the process of being squeezed.

To prevent each sacrificial rat from suffering, they anesthetized it first. Then they inserted heart and blood pressure monitors and offered the rat to a hungry boa constrictor. Within six seconds of being bitten and wrapped up, the animal’s arterial blood pressure dropped by half, and its central venous pressure — the return supply — increased six-fold, the study says. The blood couldn’t flow, and the animal’s internal organs started shutting down.

“I remember being in the room and the students were looking at the data in disbelief that it happened that fast,” Boback says in a statement. “We could see the arterial pressure go down, the venous pressure go up and we could see this right when the snake was doing it.”

In repeated experiments, using 24 rats in all, some of the snakes also looped their bodies around the rats’ abdomens. Pressure around the abdominal cavity has been shown to dramatically diminish the heart’s output, the researchers say. Either direct pressure on the heart, via constriction of the thoracic region, or constriction of the abdominal cavity induces the 6-fold increase in venous pressure.

As soon as circulation effectively stopped, the team watched the rat’s heart begin beating irregularly. They surmise that the pressure of constriction stops blood from flowing to vital organs, which begin shutting down.

In previous work, the same team noticed that snakes can apparently detect their prey’s heartbeat while constricting, and can gauge how much work they have to do to finish it off. This work suggests “snakes may actually be inducing pulseless electrical activity and therefore release prey precisely when they have achieved irreversible cardiac failure,” they write. This trait — quickly dispatching lunch while expending the minimum required effort — enables snakes to eat prey much larger than themselves, the authors note.

“By understanding the mechanisms of how constriction kills, we gain a greater appreciation for the efficiency of this behaviour and the benefit it provided early snakes,” Boback says.

The research appears in this month’s issue of the Journal of Experimental Biology.