The tiny insects see in low-res, but are masters of motion tracking 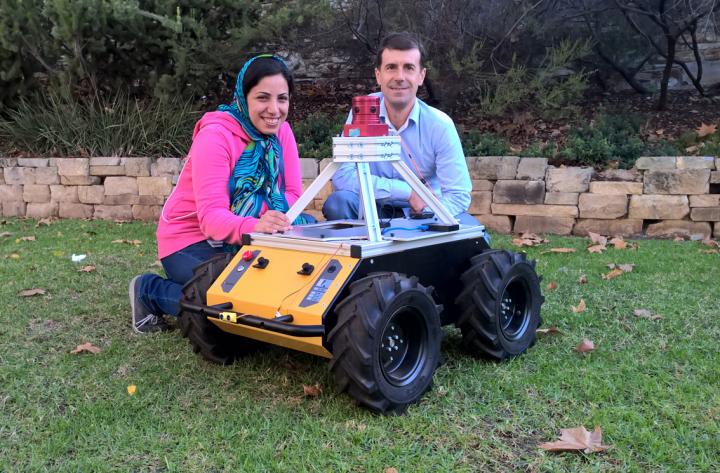 Some robots of the future will see the world through the eyes of insects. In a study published this week in the Journal of The Royal Society Interface, researchers have developed software that lets machines track moving objects with the same precision as dragonflies.

Although dragonflies have puny brains and vision with extremely low resolution, they are still able to catch prey with greater than 95 percent accuracy against oft-cluttered backgrounds such as swarms of other insects. What’s more, they can do this while flying upwards of 60 miles-per-hour.

The robot the researchers are developing will look more like a yellow Tonka truck than a flying insect, but what’s important is that its vision system could be used in the future for such things as smart cars, bionics and surveillance, said Zahra Bagheri, the lead author of the study.

“There are so many labs in the world that are developing animal-like robots,” she said. “It’s the algorithm that interests us.”

To get the data needed for the algorithm, Bagheri’s team first identified a set of neurons in dragonfly brains that specifically track tiny moving objects, which give the insects’ their incredible abilities to follow and intercept prey. In the lab, the researchers plucked the wings from dragonflies and drilled a tiny hole into its head where they could put an electrode onto the neurons. In a method analogous to the rehabilitation scene from A Clockwork Orange, the researchers placed the dragonflies in front of a monitor and showed them different stimuli while they recorded data from the neurons.

The researchers found that the dragonfly’s ability to filter out noise helps them track targets moving along continuous trajectories, Bagheri said. She compared this method of filtering stimuli to people who are deep sleepers.

Dragonflies also have an “active gaze control” where their eyes are fixed, and they can only rotate their heads. This forces it to keep its target within five degrees from its central view. This was an integral part of the tracking algorithm that Bagheri and her team created.

“Instead of just trying to keep the target perfectly centered on its field of view, our system locks on to the background and lets the target move against it,” she said

The researchers tested how good their algorithm was at tracking motion by making it analyze moving targets in a virtual simulation of the outside world. They took photos of nature scenes around Adelaide, Australia, and used a computer to stitch them together into a cylinder-shaped panorama. Then, they made their algorithm track objects moving in a three-dimensional space, a kind of virtual dragonfly’s eye. The results were encouraging: their algorithm was 20 times faster than other similar programs at locating a target in a cluttered environment. The robot that will use this vision system might be completed in the next few months, said Bagheri.

Emulating the vision of insects isn’t new to the field of robotics. In a 2013 study published in PNAS, researchers created a curved robotic eye that would produce a mosaic effect like that of the eyes of fruit flies, giving it a large field of vision and excellent motion detecting capabilities. And just last March, a tiny three-ounce drone used a vision system based off that of bees to help visually gauge its position and stay level with uneven terrain, without using a large accelerometer.