Frozen Fruit Fly Sex Is As Freaky As It Looks

But it could reveal more about how life is made 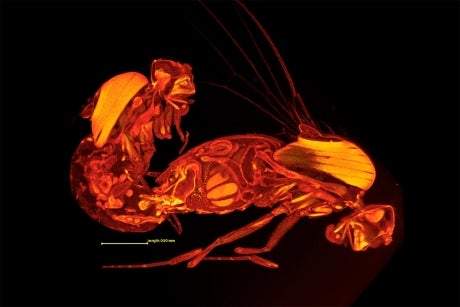 Male fruit flies are quite the Casanovas of the insect world. As he courts a female fly, the male dances and sings with his wing vibrations to woo her over in hopes of mating with her. If all goes well, she can lay up to 500 eggs at one time.

But the nitty-gritty details of how flies mate and fertilize eggs remained largely obscure until this month. Using cutting-edge 3D scan technology, researchers at Cornell University photographed what happens inside the female reproductive organ during and after sex by flash-freezing the flies mid-intercourse with liquid nitrogen.

This allowed the scientists to see not only what was going on during the coupling, but how fertilization itself took place afterwards. The frozen flies were scanned using an X-ray CT instrument resolution that could resolve details as fine as one-fiftieth a strand of human hair (ranging from 25 to 100 nanometers.)

The study, published in the journal Proceedings of the National Institute of Science, examined how ovulation, egg movement, sperm ejaculation and fertilization are coordinated — all the nitty gritty details. It also shed light into how male seminal fluid facilitates the reproductive changes in the ovaries and oviducts to help fertilization, specifically, revealing that a certain protein in male fruit fly semen is responsible for loosening and straightening the female’s oviducts, to allow her eggs to move out of the ovaries. 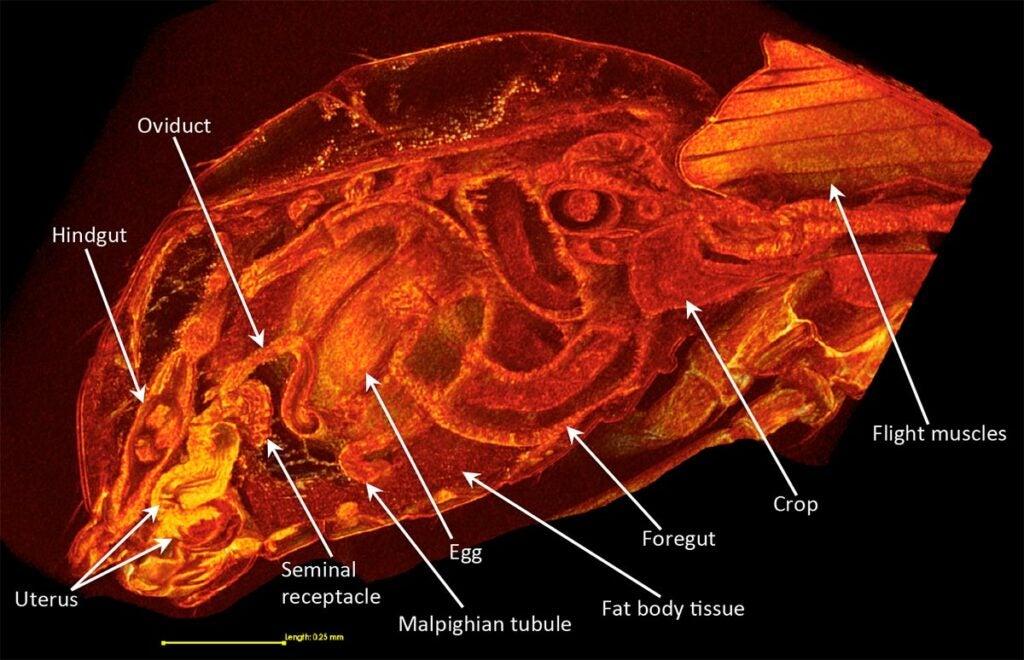 According to researchers, semen in larger insects, animals, and even humans display similar mechanisms in catalyzing changes in the female’s reproductive system.

“These results are important because they define how specific chemical or cellular signals regulate morphology – and thus functions – along the reproductive tract,” said Marina Wolfner, a professor of molecular biology and genetics at Cornell and one of the study’s authors, to the Cornell Chronicle.

The scans also showed how the male mounts the female to get in place to mate. Male fruit flies have spiky hairs in its legs near the reproductive parts and used them to clasp onto the female and affirming itself in position to mate.

But spiky hairs were not enough to hold the flies together after they were flash frozen. So the researchers used a rather ingenious and inexpensive tool to affix them in their sex positions: one of the authors used her own hair strands to lasso the flies together by their necks.

The study wasn’t just good fodder for science, but also for any hypothetical 50 Shades of Grey adaptations featuring an all-fly cast of characters.