Yes, UFOs exist. But they’re probably not what you think.

New video of a 2004 encounter between the U.S. Air Force and an unidentified flying object has the internet asking about aliens. 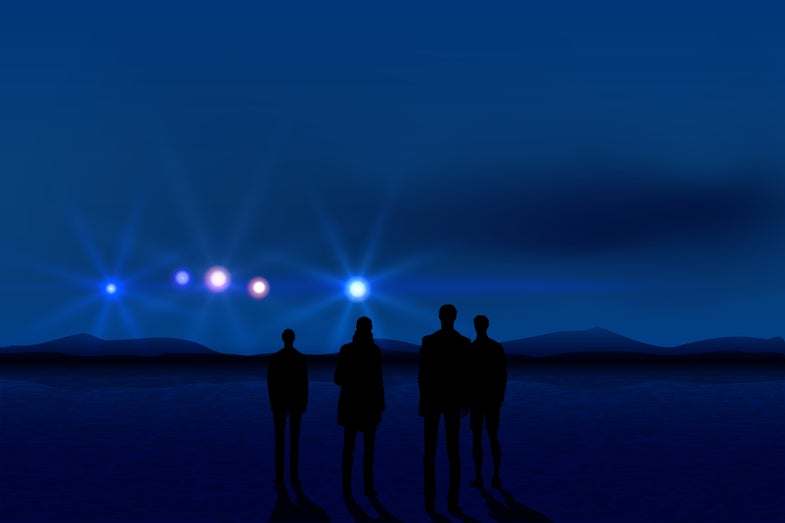 Group of men seeing UFO in the dark sky.
SHARE

On a dark and otherwise serene night back in the 1960s, my grandpa, a doctor and recreational pilot, was ferrying two lawyers to a deposition. As they bisected the state of Washington, the airborne group encountered something surreal: An aircraft unlike anything they had ever seen before was flying straight toward them. My grandpa recalled an oblong flying machine, with blinking lights and an eerie ability to hover, that tracked his movements through the sky. When he ducked, the other object also ducked. And when he rose, it rose. While it was certainly an unidentified flying object, my grandpa never claimed he saw aliens. He seemed to believe that someday, the strange visit he’d received would be explained—in earthly terms.

This family memory was the first thing I thought of when I read the recent New York Times story about U.S. Navy pilots who say they saw an unidentified flying object near the San Diego coast in 2004. In the story, titled “2 Navy Airmen and an Object That ‘Accelerated Like Nothing I’ve Ever Seen,'” the Times described in hair-raising language the moment Cmdr. David Fravor and Lt. Cmdr. Jim Slaight saw the… thing. Unlike more common aircraft that use propulsion to move through the sky, this craft hovered. It acted almost like an anxious dog, “jumping around erratically,” but also zooming back and forth from the Navy aircraft as if it were curious about the other airplanes it had discovered. Most alarmingly, it moved fast as lightning, and seemed privy to insider knowledge. When the Navy pilots made a game-time decision to head back to their rendezvous point, the strange object somehow beat them there.

Reading this would send chills radiating up and down any normal person’s spine. The accompanying video depicting the encounter—and the alarm in the pilots’ voices—does nothing to suppress that hair-raising sensation. The first question many readers asked was, could this be an alien encounter?

While there’s a slim possibility (like, an infinitesimally small chance) that this really was some interstellar aircraft belonging to an otherworldly species, the answer to the alien question is probably no.

As the New York Times wrote in another piece published last weekend, the U.S. government has been searching for extraterrestrial life on and off for decades. While some information remains classified, so far as we know, we haven’t found anything particularly promising. A more likely explanation for the 2004 San Diego event could be that a government agency, deep within the United States military or the military of another nation, is simply working on new, mind-boggling technologies we’re not privy to yet. Though it may feel like a less exciting rationale for the weird event, there’s immense precedent. Much of the alleged alien activity of the past 80 years has ultimately been revealed as top secret government projects.

Take, for example, the hidden history of flying saucers. In the late 1950s, it seems, the U.S. Air Force really was working on Project 1794 to build a supersonic saucer. The first test of the VZ-9 Avrocar took place on Nov. 12, 1959. Hopes of a lean, mean, and circular fighting machine were high, but the prototypes never met the military’s standards. Instead of rising to an altitude of 100,000 feet, it got closer to 5,000. It never hit the right speed, either, as its shape proved pretty unstable. The top-secret project was cancelled by 1961, but visions of flying saucers have persisted.

And don’t forget the treasure trove of spooky stories emanating from the infamous Area 51. Located in the sand dunes of southwest Nevada, this top-secret site has long been believed the U.S. government’s storage unit for wayward aliens and their crash-landed ships. While much about Area 51 remains mysterious to this day, in 2013, the CIA acknowledged the site really does exist—and that it has long been used for testing spy planes, like the U-2 reconnaissance plane.

But most relevant is the “Roswell incident” of 1947. That summer, a UFO crash-landed on a ranch in Roswell, New Mexico. When the U.S. military tried to cover it up, conspiracy theories ran wild, as no one accepted the explanation offered—that the mysterious metals were just a conventional weather balloon. Today, we know from declassified documents that the myth-making machine was really a nuclear surveillance test balloon, manufactured as part of the Cold War-era surveillance operation, Project Mogul.

Some of these spooky special operations have gained name brand recognition like Area 51, but plenty of smaller, but no less profound, developments have also taken place. We’ve landed on the moon, something that would have once seemed incomprehensible (and to many moon-landing conspiracy theorists, still is). We have Harrier Jump Jets capable of vertical take-offs, a type of lift long associated with alleged alien technologies. And just this week, Boeing’s eerily-named Phantom Works division announced it had been quietly working on a Batmobile-style refueling plane. You’d be forgiven if you saw either plane on a test flight and thought it came from a galaxy far, far away.

My grandpa waited and waited to see the unveiling of a military aircraft that explained the Stranger Things moment he experienced all those years ago. However, he died in 2014 without a truly satisfactory explanation for that night. That doesn’t mean he’s wrong that the ship he saw (and others like it) were the product of human ingenuity (or human error). Even if none of these technological interpretations check out, natural phenomena, drones, and a million other non-alien blips could also be to blame. Aliens may be a fun explanation for what’s otherwise inexplicable, but sometimes, a UFO is just that: an (as yet) unidentified flying object.