Flying Further To Avoid Contrails Might Help With Global Warming 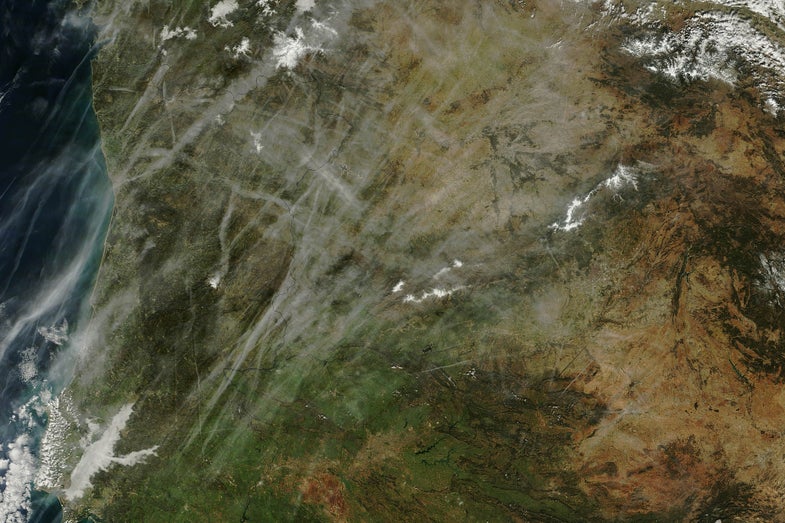 Greenhouse gas pollution from jet aircraft comes mainly in two forms: carbon dioxide emissions from burning jet fuel, and condensation trails, or “contrails,” which typically form behind aircraft when they encounter atmospheric temperature and air pressure conditions that allow water vapor or ice crystals in the air, or vapor from jet engine exhaust, to condense.

A few more clouds in the sky might not seem like a big deal. But clouds warm temperatures because they, too, reflect space-bound heat back towards the Earth’s surface. Aviation contrails–which are essentially artificial clouds–contribute more to human-propelled climate change than all the CO2 pollution created in the history of fuel-powered aviation, according to a 2011 study published in Nature Climate Change.

So Dr. Emma Irvine, a meteorologist at the U.K.’s University of Reading, and colleagues decided to examine what the climatic trade-offs would be between re-routing flights to avoid contrail-friendly conditions – called “ice-supersaturated regions” or ISSRs – and the increase of heat-trapping CO2 pollution a longer flight would create.

The equation (or “framework” in scientific terms) they devised, says Irvine, shows that “you can add extra distance on to a flight to avoid making a contrail, but still reduce overall climate impact of the flight.”

One reason is that Irvine and team decided to exclude altitude changes from the re-routing equation – important, she says, because different jets fly most fuel-efficiently at different altitudes.

Another is that the amount of CO2 a jet engine emits is determined by not just distance, but also fuel flow, which varies depending upon type of aircraft. The smallest jets, which have the slowest fuel flow and the lightest weights, can travel between 4 and 10 times further by distance (depending on whether one is considering the impacts on a 20, 50, or 100-year time horizon) to avoid ice-supersaturated regions, according to Irvine’s equation, and still have less global warming impact than if they took the contrail-forming route instead.

The largest jets, which burn fuel at a much faster rate, showed much less flexibility between extending distance and emitting more CO2, vs encountering ice-supersaturated regions and forming a contrail. Even looking at a 100-year time horizon for impact, very large jets could not travel more than three times the distance of their original routes before the CO2 harms outweighed the advantages of avoiding contrail formation.

The researchers do note several unknowns in using this strategy to cut aviation’s global warming impacts, including whether we can develop “highly accurate forecasts of ISSRs where potential contrails form,” or assess accurately the climate change effects of a potential contrail. There would also be “air traffic control and other operational and economic considerations.”

“Nevertheless, despite the uncertainties,” they conclude,