Spaceport America’s Open House Was A Tribute To Empty Space

Notes from a field trip to New Mexico's commercial spaceport 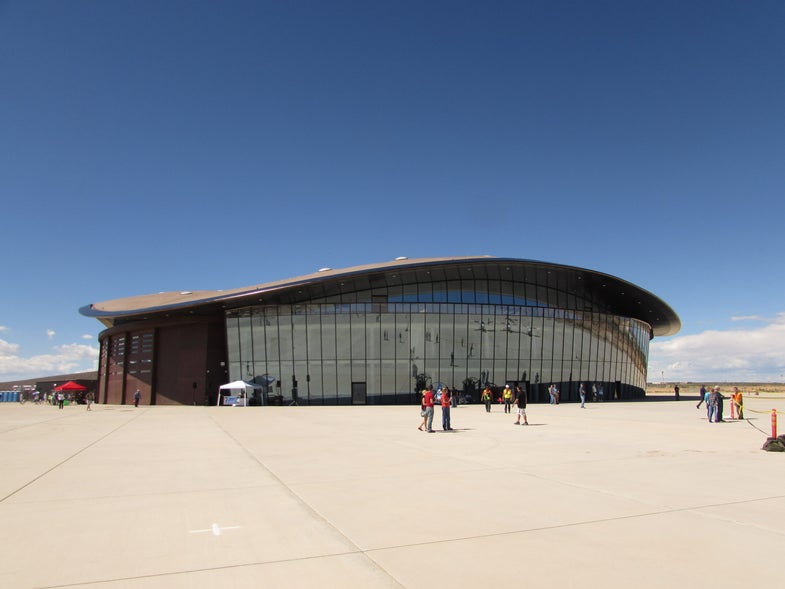 New Mexico is valuable because it is empty. The weekend of October 1, 2016, held three testaments to that emptiness: roughly 90 minutes south of Albuquerque, guests toured the Very Large Array, a complex of satellite dishes configured as a telescope pointed to the furthest reaches of space. The Very Large Array covers the same area as is within the Washington, DC beltway, and fills it with 27 radio antennas (they look like satellite dishes). The hot ticket news from VLA tour guides this year is the discovery of a galaxy cluster 11.1 billion light years away, the furthest yet spotted in a universe estimated at 13.8 billion years old.

The second great emptiness is the Trinity site, where on July 16, 1945, humanity exploded its first atomic bomb. The blast site is, 71 years later, all but indistinguishable from the hardy desert around it. It is only open to the public once a year, so tourists travel the two and a half hours down from Albuquerque, or three hours up from from Las Cruces, to revisit the dawn of the atomic age.

South of both of these is a third great emptiness, an area adjacent to White Sands Missile Range, specifically set aside for Spaceport America. The Spaceport held an open house last Saturday, and guests who registered a car with at least two people in it were allowed to visit. The location is essentially an airport for the super-elite, the terrestrial stopping point between private jets and, eventually, short hops beyond the atmosphere and then back down to earth. For the people who came to explore on foot, it is three hours of interstate, then state highway, then gravel roads. The sun did not let up, and while the vegetation that early fall morning retains a greenish hue, moisture isn’t a given and the short plants retain their harsh, stubby structure. 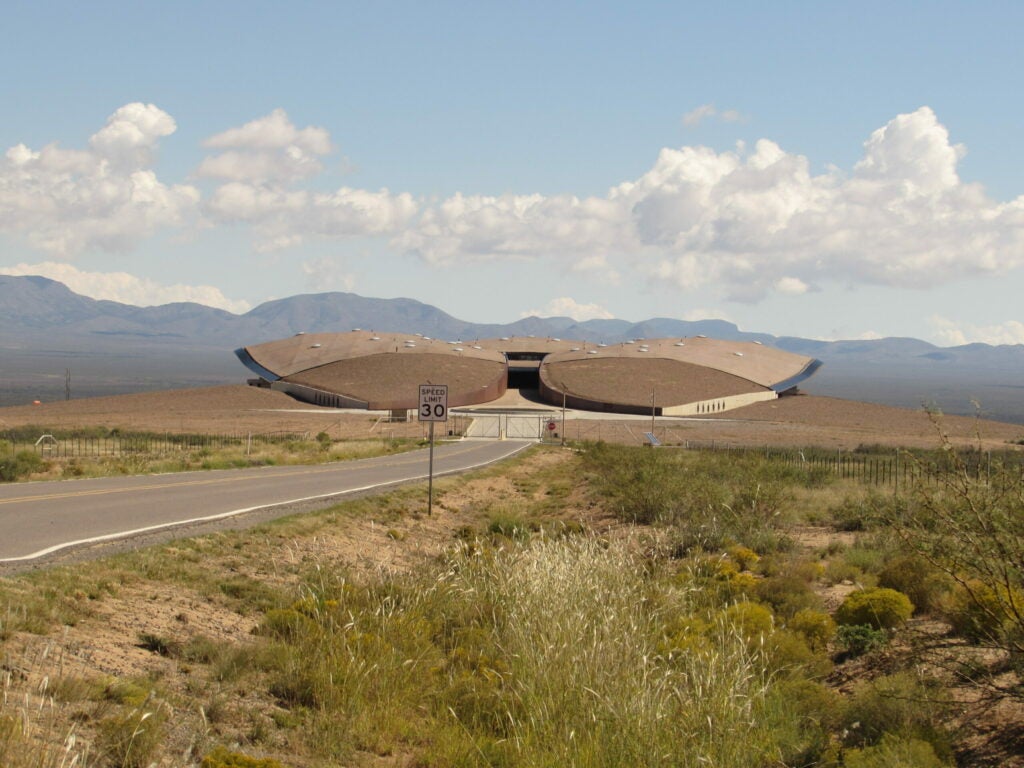 Road To The Spaceport

Posted speed limits do not apply to spacecraft.

The Spaceport stands out from the countryside mostly by its size and the presence of a security checkpoint; the muddy hues of the building and gravel embankments rhyming with the desert, if not exactly matching it. On foot, the vast cement taxiing area around the hangar is unremarkable except for the sound, blasting through speakers. When I arrived the soundtrack was Cee-lo Green and Foster The People, a musical selection that wouldn’t be out of place in a Forever21 circa 2010. This underscores a softly stated truth: Spaceport America, while owned and operated by the State of New Mexico, is largely defined by its first, famous tenant: billionaire Richard Branson’s Virgin Galactic, the only private spaceflight company co-branded with a musical empire.

In 2010, Branson shook hands with New Mexico’s then-Governor Bill Richardson at the dedication of Spaceport America’s runway, as the White Knight Two carried SpaceShipTwo overhead. At the time, there was speculation of a first passenger flight as early as 2011. Those dreams, and the fortunes of Virgin Galactic, suffered a major setback in 2014, when SpaceShipTwo crashed in the Mojave desert, killing one of the two pilots on board. An investigation determined the cause of the crash as pilot error. Virgin Galactic vowed to rebuild and continue, but by the time Richard Branson rappelled down the completed roof of Spaceport America’s hanage to christen the building with a bottle of champagne in 2015, the whole affair had taken on a much more somber tone. 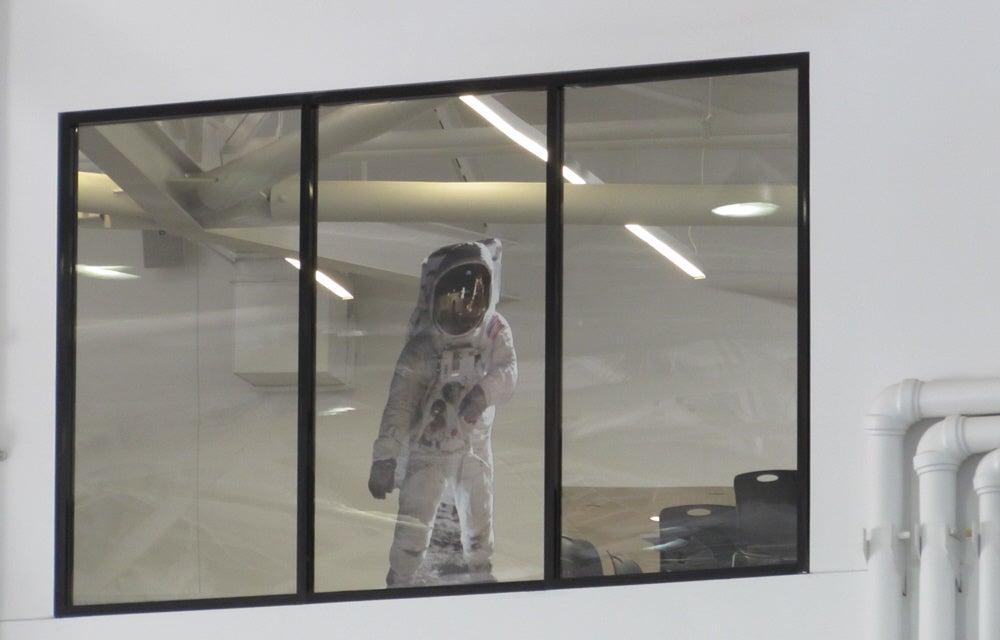 Cardboard Cutout Of An Astronaut

This two-dimensional figure looked over the hangar from an office.

Without Virgin Galactic launches, the Spaceport is struggling to justify its cost while trying to answer another question about empty space: what does one do while waiting to go to space?

The open house is one such answer: the hangar is a destination by name alone, and a few hundred people, myself and my parents included, came to see it just for that. But unless someone arrived already convinced of the merits of a spaceport half an hour from the nearest town, and two hours from the nearest airport, the open house did not do much to make the case. The event only ran until 3:00 in the afternoon, and Spaceport America struggled to fill the schedule.

Civil air patrol launched prop-planes and gliders down the runway, though any explanations of what they were doing were drowned out by the DJ. A trio of foodtrucks fed the hungry visitors (one was even space themed), as guests ambled about, sitting in sun-blasted picnic tables or retreating to the sound-blasted shade next to the hangar. The fire and EMS team at Spaceport America set up a demonstration of its Striker airport fire engine, powerblasting a demonstration fire back into soggy wood. A collection of paints next to two rolls of butcher paper let children paint their odes to the Spaceport, blue handprints pressed next to “I love space,” and the initials of the painters. 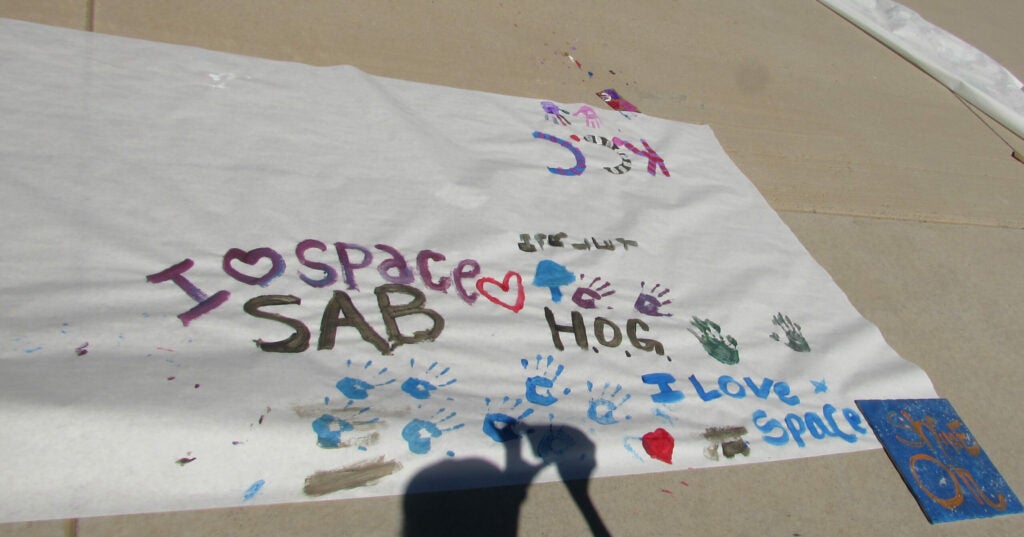 Brushes, paints, and paper provided by the open house.

Inside the hangar, past the single sign explaining the day’s schedule, stood a mock-up of SpaceShipTwo. In front of the mock-up stood a real Range Rover, with an elaborate placard highlighting the sponsorship relationship between Land Rover and Virgin Galactic. It was the most detailed explanation on site. 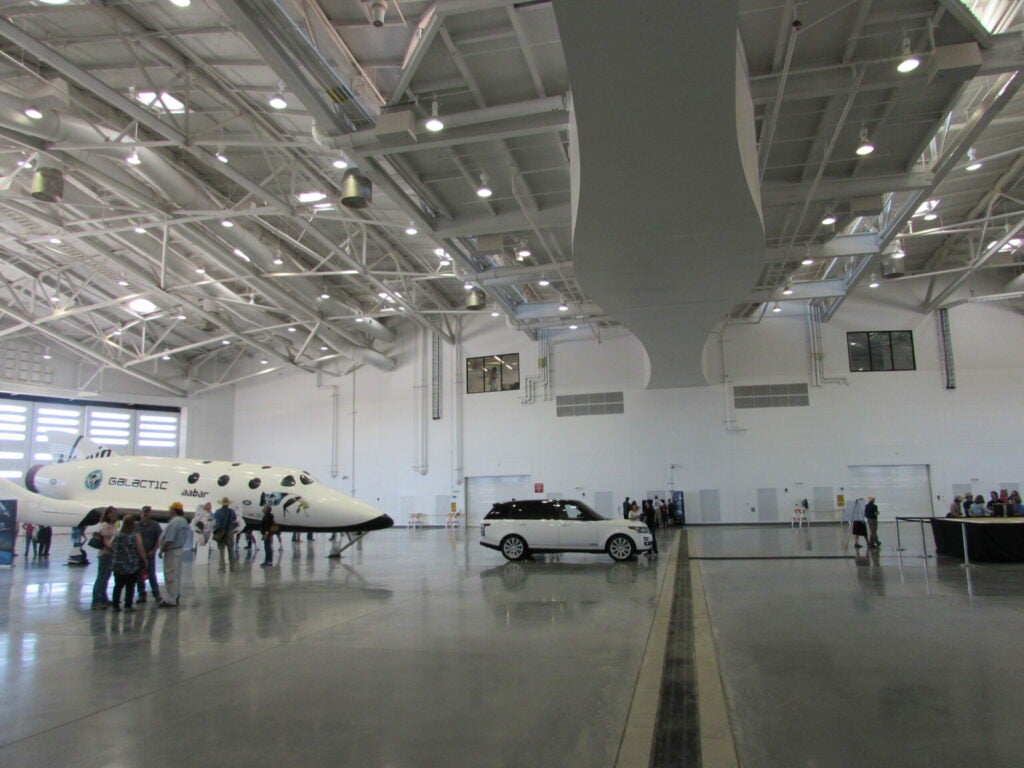 On a table inside the hangar, Dr. Bill Gutman, Director of Aerospace Operations at Spaceport America, explained the various materials used in spacecraft design, passing around cubes of aluminium, magnesium, and tungsten for guests to hold. Periodically, he would lead his audience outside, launching a water bottle with water and air pressure alone, then another water bottle with a squirt of pure alcohol and a spark. The whole affair felt very much like a guest speaker exposition for a middle school, or a field trip to a children’s museum. ¡Explora!, a children’s museum in Albuquerque, had multiple activity tables set up in the hangar, too. Some were related: construct a paper glider to float up this plastic tube over a fan pointed upwards, and some weren’t, like a table covered in microscopes.

The entire open house, not counting time for lunch, could be leisurely experienced in 45 minutes, perhaps an hour.

For Virgin Galactic’s future passengers, they will spend 45 minutes with their spacecraft attached to White Knight Two, before SpaceShipTwo rockets off into space and weightlessness for at least four minutes, then strap back in and begin a 20-minute long descent to earth. Tickets are priced at $250,000 a person.

The open house, to its merit, was free. All I had to do to go was register and get there, committing to a six-hour round trip to see what, exactly, was happening out in the desert. The answer is one as true for the desert now as it has been for centuries: not much, yet, but just maybe, something sudden, expensive, and historically significant.