Scientists spotted a supernova just hours after it exploded 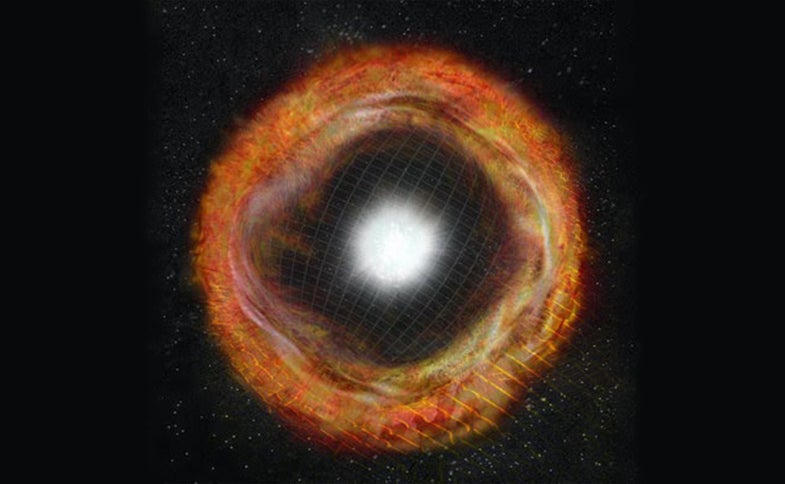 Artist illustration of the supernova SN 2013fs, located in a nearby galaxy. Ofer Yaron
SHARE

Talk about going out with a bang. Stars that are about 10 times more massive than the Sun tend to die in colossal explosions called supernovae.

Scientists aren’t sure why or how these stars detonate near the end of their lives, but recent observations of a six-hour-old supernova—the youngest ever observed—are shedding light on the star’s final moments. The results were published Monday in Nature Physics.

But what exactly happens in those final moments remains a mystery, because stars in their death throes are a rare sight. “Statistically, it is very likely that not even a single star that is within 1 2023 of explosion currently exists in our Galaxy,” writes astrophysicist Norbert Langer in a commentary about the new supernova observations.

Scientists have found that in some rare types of supernovae, the star erupts gaseous material into its outer layers before it collapses. But it hasn’t been clear whether this process is normal for more common types of supernova. By the time scientists typically discover a star that’s exploded, the supernova is several days old—by then the explosion has swept away the outer shell of material and any the clues it contained.

A supernova is born

On October 6, 2013, an automated sky survey at California’s Intermediate Palomar Transient Factory (iPTF) detected SN 2013fs—located 160 million light years away in a nearby galaxy—just three hours after the blast. Within hours of the first detection, scientists at other observatories jumped at the rare opportunity to study a newborn supernova, turning their telescopes toward the exploding star to measure its emissions.

Their observations showed that the star had been a red supergiant, and that the type II supernova exploded outward at maximum speeds of about 224,000 miles per hour.

They also found that, before the explosion, the star had been encircled in a disk of material that it ejected in the year leading up to its fiery demise. The results confirm that type II supernovae—the most common type of supernova, making up about 50 percent of all exploding stars—form these shells of gas before they explode.

“It’s as if the star ‘knows’ its life is ending soon, and is puffing material at an enhanced rate during the final breaths,” says Ofer Yaron, study co-author and astrophysicist at the Weizmann Institute of Science in Israel.

As shockwaves exploded out of the star, they ionized the material in the shell of gas, allowing instruments on Earth to see what encircled the red supergiant. The spectra revealed oxygen VI in the contents, a highly ionized state of oxygen that hadn’t previously been detected in supernova spectra, says Yaron. “That’s because we caught this event when extremely young and hot.”

The researchers think that in its final days, the star spewed out lots of material, losing mass rapidly before the core collapse. They suspect this mass ejection may destabilize the star, leading to the core collapse and supernova. This would mean that the structure of an exploding star is different from what physicists had assumed before. However, they’re still trying to explain why the star shed so much mass in its final days and years.

Future telescopes may be able to help. The Zwicky Transient Factory, which will replace the iPTF later this year, will be able to survey about 10 times more of the night sky than its predecessor. And a space telescope called ULTRASAT, proposed by the Weizmann Institute and Caltech, aims to detect the first UV signals of a supernova, catching them just minutes after the blast. If the mission gets support, it would “uncover a whole new phase of [supernova] exploration and study,” says Yaron.