Why go to Mars when you can telecommute there instead? 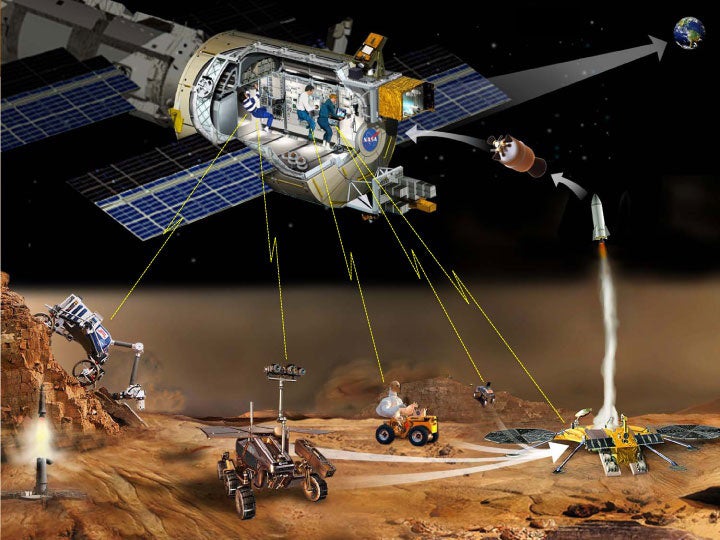 Every few weeks, a telepresence robot rolls by my desk. It’s usually a co-worker in a distant office on her way to a meeting, or checking in on the progress of physical things in the office from the comfort of her home.

At first, it was surprising to hear the whir of a robot and see a smiling face roll by. But now, it’s normal. Over the past 40 years, telepresence technologies have gone from being complicated, huge, or non-existent to being so ubiquitous and powerful that they’re used everywhere from operating rooms to your phone.

So, why not send them to space?

That’s the argument put forward in an article published today in Science Robotics. As people discuss the best ways to explore other planets, some wonder if it’s even necessary to send people to the ground—why not just send a robot avatar instead, and basically Skype with Mars?

Dan Lester, one of the authors of the paper, says that this is one idea whose time has finally come. Lester has been a proponent of the notion for years, helping to organize scientific meetings on the subject, bringing together planetary scientists, robotics, and telepresence experts in the same space. A longer report based on those meetings will be released towards the end of this summer.

“Technologically we’ve only just achieved the capability to do this kind of thing,” Lester says. “Forty years ago we simply didn’t have these capabilities that we have right now.”

NASA specialists already control the Mars rovers using a kind of telepresence, but the distance between here and Mars is so great that even the most basic motions have to be done incrementally. A new system—which would see humans sent into orbit above the planet they’re robotically exploring—would have next to no lag time, enabling quick human-like actions on the surface without needing humans to actually land.

The basic idea is this: robots capable of moving around (and of moving things around) with dexterity would be sent to the surface of a planet like Mars or Venus. A human crew would be sent into orbit around the planet to cut down on the delay—or latency, as it’s known. The crew would remotely control the robots on the surface, putting them through their paces and exploring the planet in real time, able to react swiftly if something unexpected pops up.

“It’s really a different way of looking at space exploration,” Lester says. “To many people, the word exploration depends on things like danger, risk, courage, and heroism, and if you don’t have those things you’re not really exploring.”

But Lester points out that if the goal of exploration is not creating legends, but gaining knowledge about a place, then telepresence might be an easier, more efficient way to do it.

But why send humans all the way to the planet without touching down? Cutting out that final contact actually saves a lot of hassle. With humans in orbit around a planet instead of on the surface, shelter wouldn’t be as much of a problem. After all, we’ve sent people to spend a year in space orbiting Earth. By contrast, we haven’t sent people to the surface of another solar system body for more than a few days. Of course, a well-supplied ship capable of withstanding the rigors of a long journey (radiation storms, lack of gravity, limited resources) would be required, but we wouldn’t need to worry about also hauling the materials it would take to keep a human alive on the surface. And with no people landing on the planet, a dramatic Mark Watney-style stranding/rescue also becomes less of a possibility.

“We’re putting human perception and activity where it’s hard to put people,” Lester says. While Mars is our current focus for human exploration, telepresence could expand our horizons to more hostile and unreachable worlds like Venus, or Europa, where exploring the surface would pose even more safety problems than we’d face on Mars. “We could send astronauts into orbit around Venus, or go scuba diving with submarine vehicles in the methane lakes of Titan, no sweat,” Lester says.

In addition to being hardier than humans, the robots in question have also improved in recent years. If a surgeon can use a camera and small remote controlled tools to remove an appendix in laparoscopic surgery, it’s not too much of a jump to think that a robot on Mars could drill into a rock with ease. And other fields, including oceanography, are already sending telepresence robots into the field.

That’s not to say that we’ll never set foot on another planet. “I’m not saying that we shouldn’t send people,” Lester says. If the goal is human colonization of other worlds, Lester agrees that humans are definitely needed. But even there, human telepresence could be a boon, helping set up vital infrastructure before the first colonists land.

Pulling together the technologies that exist into a working and otherworld-ready prototype is one challenge, and making sure that humans can safely operate the tech from space is another. Lester isn’t sure how much it would cost or how long it would take for full telepresence to take off. So, it might be a while before astronauts blast off to orbit another planet to drive robots around from the relative comfort of a space habitat. But someday, it might be as normal as a robot driving by your desk.