Or why some of us do, anyway. 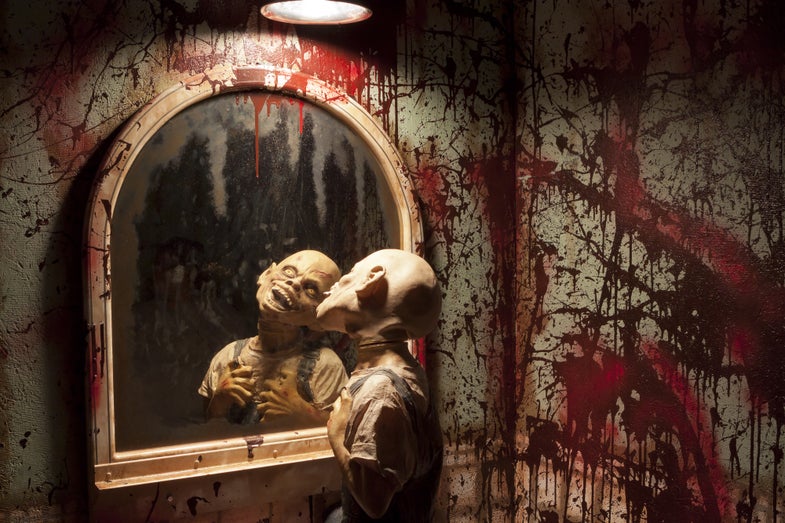 Deep in the bowels of the Scarehouse Pittsburgh’s most extreme haunted attraction, lurk zombies, demons, and a sociologist obsessed with fear. Margee Kerr has been studying fright for over a decade, and her most recent experiment tries to make sense of why so many people willingly place themselves at the mercy of machete-wielding monsters this time of year.

As sociologist-in-residence at the Scarehouse, Kerr also uses her findings to help design the attraction for maximum horror.

But Kerr’s work is about more than achieving the maximum air during a jump scare. While fear is generally regarded as a negative emotion—albeit one that has helped us survive as a species—her latest research suggests that it can also do wonders for your mood and, paradoxically, help you relax. People who chose to go through a frightening experience came out feeling happier and less stressed, she and her colleague at the University of Pittsburgh found. The scare-ees exhibited decreased levels of brain activity in a way that mimicked the effects of meditation or a 5k run.

The researchers set up their makeshift lab in the basement of the haunted house, recruiting people who had already purchased tickets to ensure that everyone participated by choice. A spooky basement, however, is a little different than the usual lab environment. “The operations and logistics were challenging,” says Kerr. “But it was very exciting, definitely not a quiet or boring moment. It’s also good proof that you can collect physiological data in real-world settings.”

Over the course of two years, more than 250 people answered mood questionnaires both before and after going through the attraction, and 100 of them also had their brain activity measured via electroencephalography (EEG).

Overall, participants came out of the haunted house feeling happier and less anxious, tired, and stressed. The electrical reactivity in their brains—a measure of how active their brains were—had also gone down. Both effects were especially pronounced for those who had gone in feeling bored or tired, and those who had found the experience extremely scary and thrilling.

Like meditation, episodes of intense fear could leave us feeling zen-like by switching off the parts of our brains that normally prevent us from living in the present: “In those moments of intensity we are more grounded in our body,” says Kerr. “We’re not prioritizing our thinking or strategizing, and we are more focused on the moment.” That translates to greater feelings of well being, and could also explain the observed decrease in brain activity.

Not all fear is equal, though, and opting into the experience may well be a prerequisite for feeling good about it (being mugged in a dark alley is certainly not known to have beneficial side effects). Retaining a sense of control is key to reaping the benefits of a fright fest, according to David Zald, a neuroscientist at Vanderbilt University who was not involved in the new research. “If you’re reading Stephen King, and it gets too scary, you can shut the book”, he explains, and knowing that you have an out helps your conscious mind overcome the urge to flee from the situation.

That doesn’t mean we should all binge watch zombie movies instead of taking lavender bubble baths when we’re stressed—there’s probably a reason why these scares aren’t everyone’s cup of tea. Zald, who has previously studied the chemicals the brain releases in response to new and thrilling activities, thinks that some of us may get a “higher juicing” of dopamine (a hormone associated with pleasure) in frightful situations—which might also explain why some people are tempted to bite down on the world’s spiciest chili pepper just for the (excruciating) thrill of it while others avoid the bite of a spicy dish. But novelty is key, Zald says, which is why you wouldn’t go back to the same haunted or watch the same scary movie more than once—or if you did, you wouldn’t expect them to provide exactly the same rush as they did the first time.

Kerr is also interested in the differences that set thrill seekers and horror house junkies apart from others, and says she’ll be collecting data to answer that question sometime in the future. So if a house of horrors is on your Halloween agenda this year, don’t be shocked if a fright-loving scientist tries to lure you down to the basement to get a look at your brain.