Watch people beatbox in an MRI 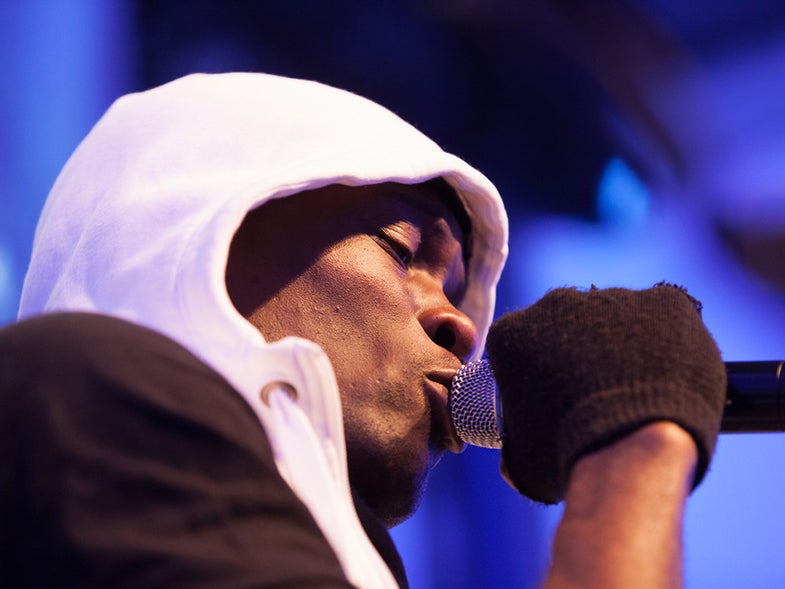 Naturally 7 at the Bell Ice Cube in Vancouver BC. ianpaterson via depositphotos
SHARE

If you struggled to master the rolling trill that differentiates pero from perro in Spanish half as much as I did, beatboxing probably isn’t the right hobby for you.

Performers regularly contort their vocal muscles into shapes alien to their native tongue, past research has shown. And according to results presented yesterday at a joint meeting of the Acoustical Society of America and the Canadian Acoustical Association in Victoria, British Columbia, many artists also produce sounds entirely unknown to modern linguists. Now you can see exactly what produces those extra-lingual effects.

You’re looking at the beat boxer’s tongue, pulsating like an alien worm as it rides a wave of pressure from the throat’s vocal cords to an explosive exit from the lips. Cognitive scientists from the University of Southern California call this sound the “voiceless glottalic egressive labial stop,” but most of us recognize it as the performer’s approximation of a kick drum going thud thud.

And there’s more where that came from. The team captured MRI videos of various artists reproducing 30 other effects, from throbbing throat bass drums (“unreleased voiced glottalic ingressive velar stops”) to popping click rolls (“voiceless lingual egressive alveolar trills”). You can even compare them side-by-side on the group’s website.

So why is an interdisciplinary team of linguists, engineers, and computer scientists watching beatboxers beatboxing on their backs in an MRI machine? The skill straddles the intersection between language and music, USC PhD student Tim Greer said at yesterday’s conference, and his group hopes the emerging artform might help mark the limits of what humans can accomplish linguistically.

“[Beatboxers] are trying to create a new sound system,” says Shrikanth Narayanan, a USC engineer and the team’s leader. “We just wanted to see the similarities and differences from a cognitive science perspective.”

And that effort starts by cataloging the collective repertoire of various artists. Previous research had focused on one performer, but this time the group was able to recruit five different beatboxers—including one of their own, undergraduate biomedical engineer Nimisha Patil.

During a session, each beatboxer spent between 30 and 90 minutes performing all the sounds they knew while an MRI machine recorded slices of their heads and mouths. Beatboxing on her back wasn’t too hard, Patil says. The biggest challenge was resisting the temptation to move with the rhythm, which would skew the imaging. “It won’t be your head, it’ll be the middle of your eye or something,” she says.

Once they had filmed precise movements of the tongue and various other parts of the vocal system, the researchers tried to categorize them using the traditional linguistic framework for breaking down sounds based on how the mouth produces them and where. A “bilabial fricative,” for instance, comes from the friction of air blowing between two lips—like the v sound or the b sound in English. Some beats fell neatly into similar descriptions, Greer said during his presentation, but others—like the “inward click roll with lip roll”—broke the linguistic mold entirely. “We don’t see this articulation in any language that we know of,” he said.

Lip rolls, distant cousins of lip-smacking and raspberries, are some of the harder effects to learn, Patil says, which makes perfect sense given Greer’s findings. “If you think about the language you speak, you’re never going to be rolling your lips in the middle of a sentence,” she says. We learn language based on the sounds we find around us, so you wouldn’t expect anyone to pick up these rare effects by osmosis—except perhaps the most devoted of Yankees fans.

While the group doesn’t have many concrete linguistic breakthroughs yet, they’re dreaming big. Next, Narayanan hopes to build upon the “vocabulary” they’ve been cataloging and see if the practice has patterns resembling grammar rules, such as whether certain effects tend to follow others. He sees beatboxing as a complementary system, overlapping with but independent from speech, that can expand the field of linguistics.

“We can go beyond language,” he says. “Beatboxing is another platform.”

The linguistic side of beatboxing interests Patil too, but she also has a more practical application in mind: learning—and teaching—new beats more quickly. She says most beatboxers muddle through largely by trial and error, mimicking others and playing around at random. But this technology’s cutaway vision exposes the exact machinery behind each beat, removing the mystery and need for guesswork.

“Just seeing the different tongue movements,” Patil says recalling her first time watching MRI footage of her own beatboxing session. “There are so many things going on that I didn’t even know I was doing.”