The phrase originated 69 years ago today. 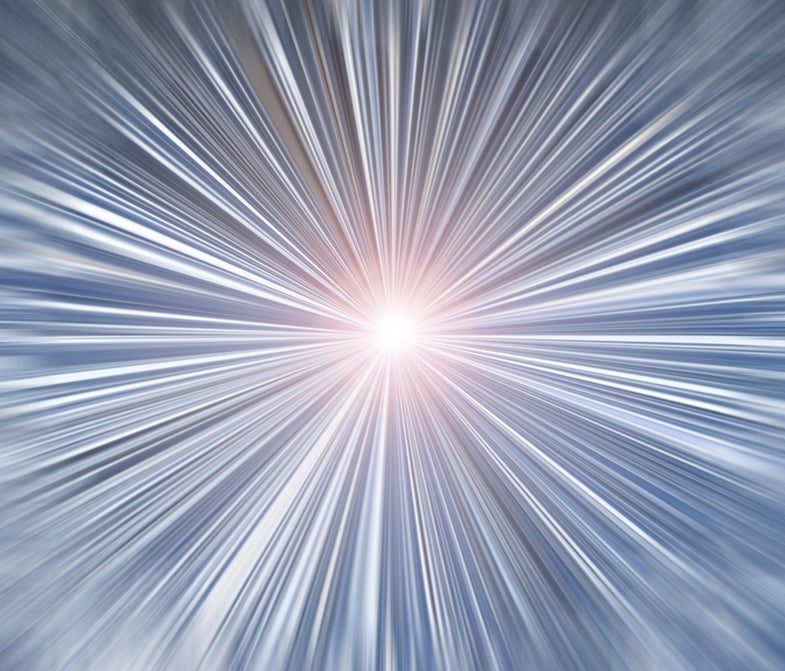 The big bang is one of those theories that even the most casual student of science finds familiar and, at least at face value, is fairly easy to understand: we know the universe is expanding out in all directions, and some physicists figure there must have been a point when that whole thing started. All the matter in existence was packed up into a tiny, hot, dense little nugget, and then suddenly it wasn’t. Bang went the universe, and it’s been growing ever since.

So it might surprise you to learn that the name of this popular origin story came from a guy who thought the whole idea was total nonsense. It all started on March 28, 1949, when physicist Fred Hoyle got on a BBC broadcast to discuss his own ideas about how the universe began—namely, that it didn’t actually begin. Hoyle didn’t think the universe had an exact starting point, and he championed what’s widely known as the steady state model: the notion that the universe is constantly making new matter everywhere, all the time, even if you stretch backward in time for infinity.

“He emphasized the contrast between the Steady State theory and ‘the hypothesis that all matter of the universe was created in one big bang at a particular time in the remote past,'” historian Helge Kragh explained in the April 2013 edition of Astronomy & Geophysics, “which he found to be ‘irrational’ and outside science.”

This is widely accepted as the first use of the term big bang to describe the theory, and it almost certainly brought the phrase into popular use; the BBC circulated that first talk and several others featuring the new lingo in print and on the radio (though there was a bit of a gap before it really took off—science papers didn’t start using it regularly until the ‘60s, and it took a couple decades more for “the big bang” to become the preferred term amongst astronomers). But for the record, Kragh argued in his 2013 article that Hoyle didn’t use the phrase derisively—he was staunchly opposed to the big bang theory, but the name wasn’t necessarily intended to mock it. He just thought it was an apt description for the explosive idea, and that it highlighted the way in which it differed from the theory he championed.

Scientists have toyed with the idea of a universe with a finite beginning for hundreds of years, but explorations of that hypothetical event picked up in the 20th century. In 1931, following Edwin Hubble’s experimental observations of the universe’s constant expansion, Georges Lemaître proposed that a “primeval atom,” a sort of cosmic egg, had exploded to form the universe.

Not all physicists liked the idea of a cosmic egg, especially since it created the need for a cosmic chicken. If a singular explosive moment got the whole thing started, what happened before? What was there before the universe burst to life?

There have been many attempts to answer (or avoid) that question—you can read about some of the wildest ones here—and Hoyle’s steady state was one of them. Research in the ’50s and beyond on cosmic background radiation, which is a signature left behind by the big bang, basically debunked Hoyle’s original model. But he continued to try to tweak it to fit the new evidence; in 1993, he and some colleagues proposed a modified version of steady state cosmology that allowed for occasional, small bursts of creation—minibangs, if you will—but this is still generally refuted.

Hoyle, who died in 2001, did more than just name the big bang (and argue against its existence). He also worked with Willy Fowler to show that the heavy elements of the universe, which make up life and most of the things that support it, formed inside stars and their explosive deaths. Fowler was awarded the Nobel Prize for Physics for the work, while Hoyle missed out, much to Fowler’s confusion. Some argue the committee snubbed Hoyle because in1973 he’d publicly and vehemently criticized their decision to award Antony Hewish (for discovering the first pulsar) while ignoring his student Jocelyn Bell Burnell.

But while Hoyle and his contributions might not be as recognizable to laypeople as some more famous astrophysicists, his words are certainly evoked daily around the world. Just maybe not in the way he intended.

“Words are like harpoons,” Hoyle said in a 1995 interview with Scientific American. “Once they go in, they are very hard to pull out.”