Charles Minard is known for the ‘best graphic ever,’ but he may have topped it with these maps 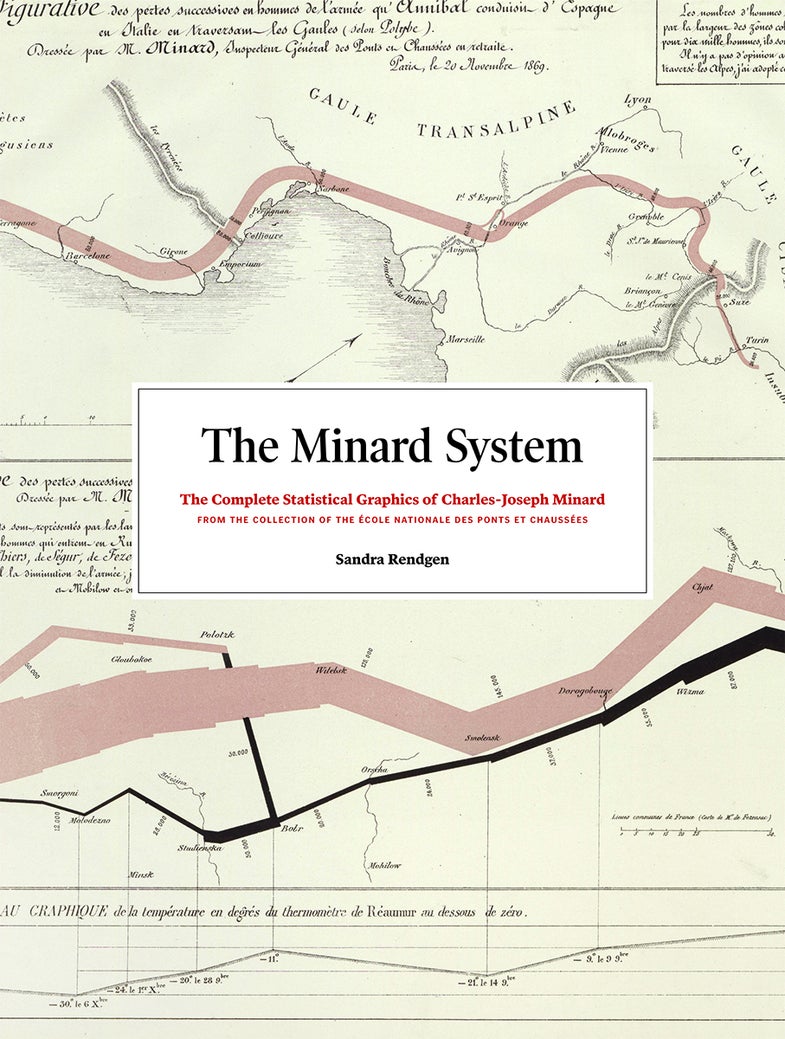 Charles Minard was not a designer by trade, or at least not the kind of artsy mind we usually associate with creative genius. He was a civil engineer. He spent his career teaching at France’s premiere engineering school. He worked as the Inspector General of Bridges and Roads. It wasn’t until he retired at age 70 that he really began the work he would become best known for: infographics.

Minard’s most famous piece, reproduced below, was also his last. The bottom portion of the chart is the bit that esteemed infographic designer Edward Tufte said “may well be the best statistical graphic ever drawn.”

A great infographic is simultaneously data-dense and intuitive to read, even though those are generally opposing principles in a visual. Though Minard’s graph doesn’t reference Napoleon at all, it is in fact a representation of the French commander’s ill-fated Russian campaign of 1812. The thickness of each band indicates how many soldiers were in the army as they marched east towards Moscow, as well as how many retreated back to safety.

Part of the genius of Minard’s portrayal is that the general story is immediately clear with little to no explanation: the march begins with many soldiers, but ends with very few. In fact, most men are lost long before the army even reaches Moscow. But the more you look at the graphic (and the closer you’re able to zoom in on the image), the more information pops out. The bottom portion contains a temperature graph showing the progress of winter. The band itself contains annotations with crucial dates and locations. And it’s all overlaid onto a map, so you can see exactly where the army was positioned at every move. It’s simple, yet complex.

But despite his fame for this singular graphic, Minard wasn’t a one-hit wonder. A new book out this week, The Minard System by Sandra Rendgen, catalogues much of his other work and shows how many forms of infographic design he pioneered. Here’s just a small sample of those of those graphs. You’ll have to check out the full, beautiful book for the rest.

One of the themes of Minard’s work is how frequently he went back to update maps as new data became available. Here we see just three pieces in a long series detailing the change in cotton imports to Europe during the course of the American Civil War.

In 1858, a few years before the war broke out, the U.S. is exporting much of the cotton into both Europe and Britain. But by 1864, one year into the war, it’s nearly shut down. Though the states were still producing some cotton, they were hardly exporting it. China responds by massively increasing the quantities they’re sending west. The war ends in the spring of 1865, imports from the U.S. spike. But by this time, plantations in Egypt are now sending a good chunk of cotton, and China continues to hold a strong place in the world’s cotton trade. The war has changed things and, as infographic historian R.J. Andrews explains in a video, Minard’s series beautifully captures one aspect of the fight.

Similar to his Napoleon map, this graphic shows both the amount of the fuel at each geographic point. You can’t read the legend at this scale, but each color indicates a different energetic source: blue for Belgium, green for England, and various other colors for different regions of France. This isn’t just looking at how much fuel each area is sending—it’s showing exactly where it goes. Sure, England sends plenty of coal. A pie chart could tell you that. Only a figure like this could tell you that most of Paris is fueled by English imports whereas Belgian coal travels much farther, all the way to Bordeaux.

Not content to merely chart the import and export of goods, Minard also looked at the flow of humans. This map shows where people were emigrating to in 1858. Many headed to America, but Minard also captured an English outpouring to Australia, the Portuguese emigration to Brazil, and the slave trade out of Africa. The width of the lines here again indicates how many thousands of people were in motion, and a closer look reveals that Minard also annotated the precise numbers at certain points along the path that dwindle somewhat along the way, presumably as people died on their long journeys.

Whether forced enslavement could or should be called “immigration” is now contested. In Minard’s map, it’s unclear if any of the lines emerging from Africa include voluntary movement.

Movement of ancient languages in the modern era

This last piece is something of a departure for Minard. Though it’s still technically a flow map, it doesn’t have the bold lines or obvious directionality of his other work. This shows where various languages are spoken, with fine lines indicating how they’ve moved and annotations to explain certain phenomena. The cluster of blue in Ireland, Wales, and Scotland has a small note that the spread of these languages was limited by their ocean borders. The brown area indicating Persian notes that it’s the language of Iranians, and a close relative of Sanskrit.