Astronomers just mapped the ‘bubble’ that envelopes our planet 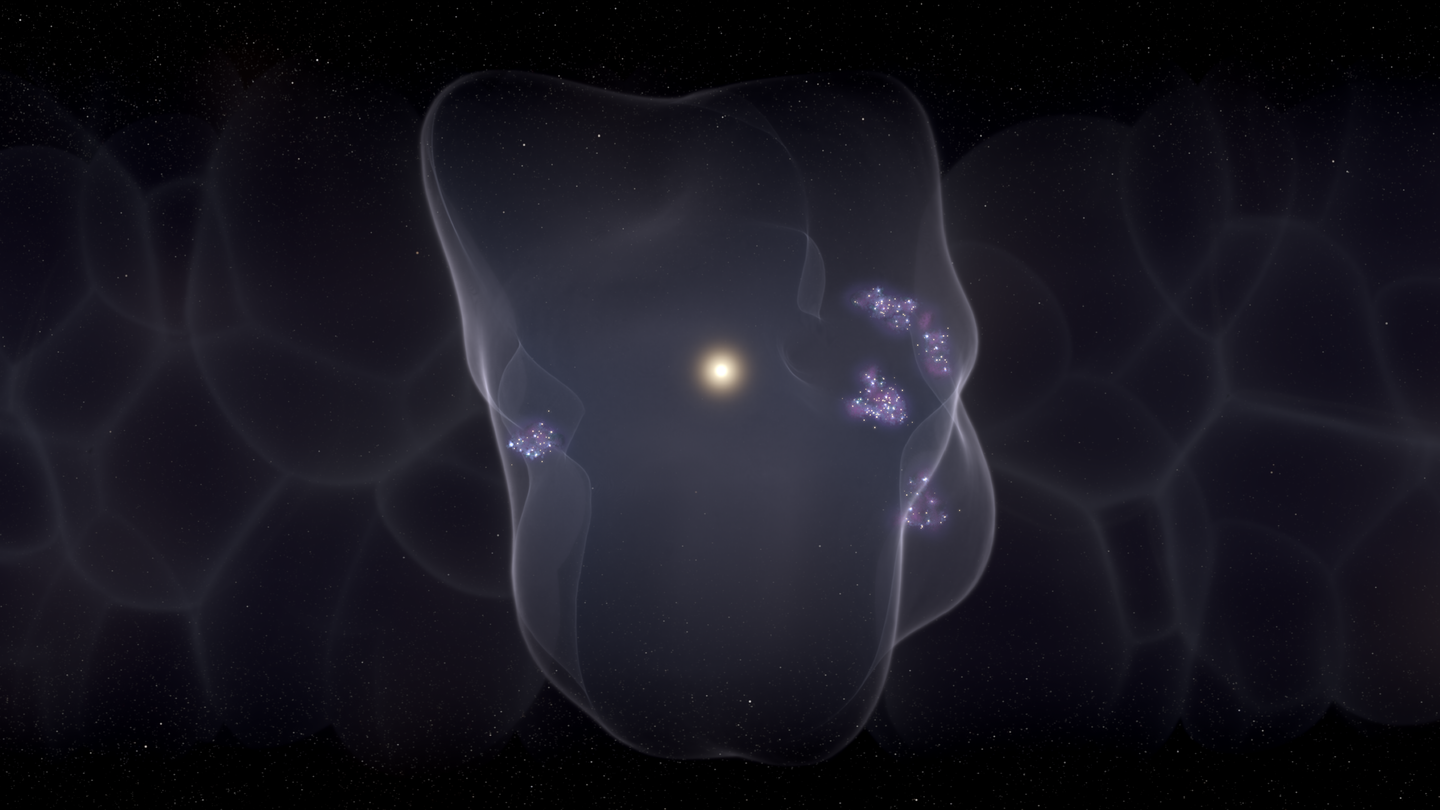 An artist's illustration of the "Local Bubble" with star formation occurring on the bubble's surface. Leah Hustak (STScI)
SHARE

Many of us may feel like we’re living in a bubble, but Earth actually is residing in one.

Published today in Nature, researchers from the Center for Astrophysics and the Space Telescope Science Institute have created a 3D map that reconstructs the evolutionary history of the “Local Bubble,” a 1,000-light-year-wide cavity of cold gas and dust that’s responsible for the formation of all nearby young stars—including our sun.

The study reveals that Earth and all of the stars and star-forming regions within 500 light-years of the planet reside on the surface of this bubble, which is good insight, according to Catherine Zucker, astronomer at the Space Telescope Science Institute and lead author of the study. Learning more about how the Earth came to be inside the Local Bubble could be yet another definitive step in better understanding our galaxy.

“Essentially we have a front-row seat to the all star formation that’s happening on the surface all around us,” Zucker says. But while astronomers have known about the Local Bubble for decades, this discovery wasn’t years in the making. In fact, it was an accident.

“It actually started out because we just wanted to make a map of all the major landmarks, basically, in our galactic neighborhood,” she says. But what began as a typical foray into studying the spiral arms of the Milky Way, turned into a fantastic revelation after the team noticed that stars seemed to be unifying near the bubble’s surface.

By using a software program called Glue and data from the space observatory Gaia to create a map of where exactly these stars lie, Zucker’s team was able to determine that the bubble’s origin stems from a series of supernovae explosions that date back about 14 million years ago. These cosmic bubbles were created as interstellar gas was pushed outwards by the explosions, forming expanding shells that fragmented and collapsed into nearby molecular clouds.

“Think of the Milky Way as being shaped as a very thin pancake,” Zucker says. As supernovae go off in the center of the disk, the bubbles the reaction creates pokes holes on the surface of the “pancake,” and influences its structure. Multiple bubbles can touch and even collide with one another.

Such a reaction is why the team’s results also assert that the Local Bubble’s structure isn’t actually bubble-shaped, but instead resembles a “galactic chimney.”

“We had to use data from a lot of different sources, but the most critical component was Gaia,” Zucker says. Launched in 2013 by the European Space Agency, the observatory surveys about 1 billion stars, or less than 1 percent of the stars in the Milky Way, in its mission to create the largest and most precise map of the galaxy.

Without Gaia’s high-quality measurements, studying the intricacies of star formation in the universe would be a nearly impossible task. For reference, once all the datasets were collected, the team was able to create a working 3D model of the Local Bubble in about three hours. “If you know the 3D position and also 3D motions of these young stars, you can actually turn the clock forwards and backwards,” Zucker says.

By reconstructing the history of these star-forming regions, astronomers are able to see how these areas evolved over time. That knowledge will be instrumental in understanding the role dying stars have in creating ones, and what that means for the galaxy as a whole.

Adam Frank, a professor of physics and astronomy at the University of Rochester who studies the birth and death of stars, says that the Local Bubble is a “beautiful example” of how often triggered star formation—stars created by the blast of a supernovae—happens compared to other modes of formation.

And although our planet didn’t inhabit the Local Bubble until about 5 million years ago, Frank says Zucker’s research led him to think about whether life on Earth was at all affected by the proximity of exploding supernovae.

“One of the things that’s interesting about supernovae and hypernovae,” Frank says, “is that it’s possible that they can sterilize their local environments. It’s possible if you’re close enough, you can pretty much lose whatever life you have, or at least be affected by it.” Luckily, we know that Earth’s early primordial soup did indeed survive, but for some stars in our galaxy, death isn’t an end—it’s a rebirth.

“The life cycle of stars is essential to understanding some of the things that we care most about,” Frank says. He says that it’s only through the recycling of the heavy elements they release and reform that Earth supports life at all.

“We wouldn’t be here,” Frank says. “Life wouldn’t be possible without … silicon and iron, magnesium, calcium, and all these other elements, which are born inside stars.”

Correction (January 13, 2022): An earlier version of this story incorrectly stated the number of stars in the Milky Way galaxy Gaia space observatory surveys as 100 billion. The number is actually about 1 percent of the galaxy’s 100 billion stars, or approximately 1 billion.