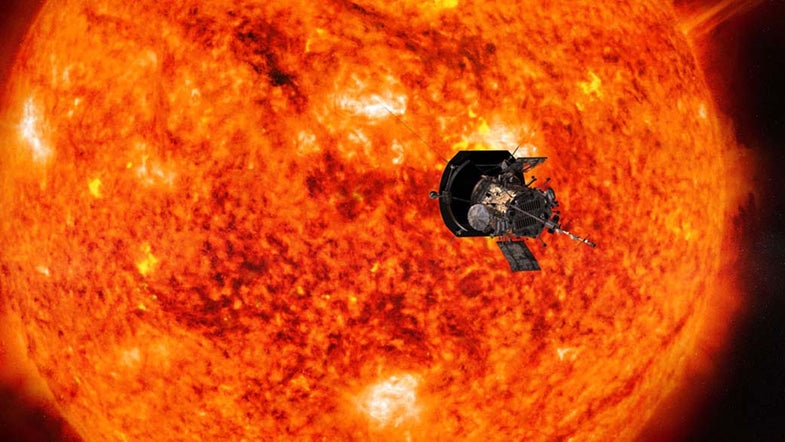 Send your name to the Sun

You’re probably not going to go to space any time soon. But your name could. NASA is continuing its long tradition of sending people’s names into the cosmos with the Parker Solar Probe, set to blast off towards our host star this July.

Your name could be part of a spacecraft traveling 430,000 miles per hour, grazing the Sun’s atmosphere where temperatures reach 2,500 degrees Fahrenheit. Inside the probe, instruments designed to take a closer look at the Sun’s corona will stay at a cool room-temperature.

All you have to do is fill out a form on NASA’s website, and they’ll add your name to a microchip that the Parker Solar Probe will carry towards the Sun. You have until April 27 to put yourself in the running.

Here’s some other space news from this week:

SpaceX’s Falcon 9 launch on Tuesday was fairly routine, sending a communications satellite into geostationary orbit. But it just so happened to be the 50th time SpaceX has launched a Falcon 9 rocket. The first launch of the Falcon 9 took place back in 2010.

First glances are great. But in space, it pays to take a second look. In this case, researchers took a peek at HR 4796A, a star system astronomers already knew had a ring of dusty debris encircling it. But at 7 billion miles across, that dust ring is a pipsqueak compared to the 150-billion-mile-wide larger dust ring they spotted with Hubble. The outer ring was just described in a paper in The Astronomical Journal.

A news release published by NASA describes the outer ring of dust as resembling “a donut-shaped inner tube that got hit by a truck.” Yum.

The eight million year old star is still very young by the standards of the Universe, and researchers think it is in the early stages of planet formation.

Nope, this is not a pizza—though that seems to be what a lot of people think of when they first see this picture (at least around the PopSci offices). It’s actually a picture of storms neatly arranged around one of Jupiter’s poles.

Thanks to the Juno spacecraft we’re starting to learn a lot more about the gas giant’s interior, and we’re finding it’s not like other planets—not even Saturn, its closest companion in the solar system (at least in terms of size).