The ghost of stars past 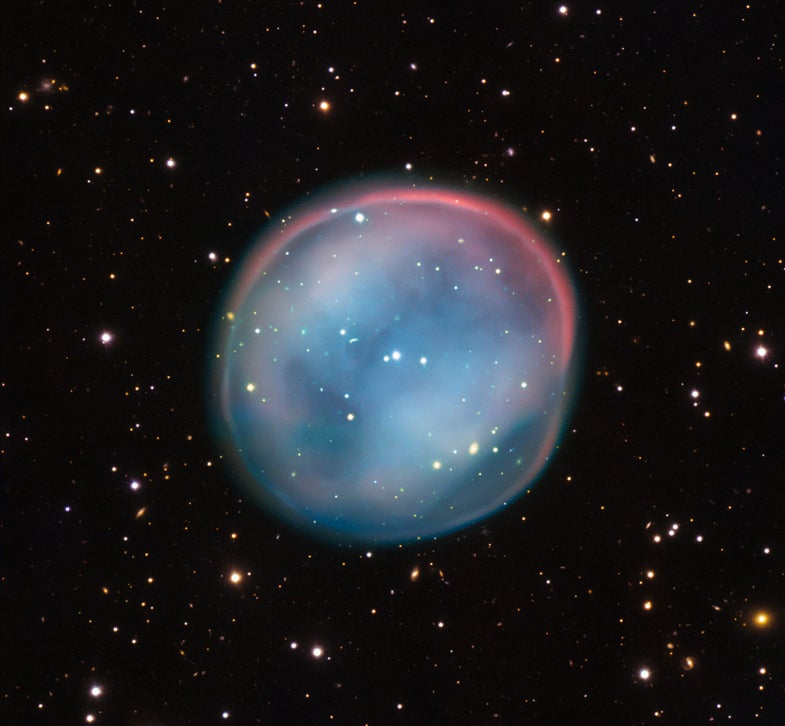 This extraordinary bubble, glowing like the ghost of a star in the haunting darkness of space, may appear supernatural and mysterious, but it is a familiar astronomical object: a planetary nebula, the remnants of a dying star. This is the best view of the little-known object ESO 378-1 yet obtained and was captured by ESO’s Very Large Telescope in northern Chile.
SHARE

This giant blob of star stuff looks like it floated off the end of a bubble wand, or at least out of Gene Roddenberry’s imagination. But the picture above is actually the ghost of a dead star.

The object, known officially as ESO 378-1 and unofficially as the Southern Owl Nebula is a planetary nebula, a cloud of gas given off by a dying star. This is one of the stages of death for stars too small to undergo a supernova. Instead of exploding, when the star gets to the end of its lifetime it starts giving off gas. The star’s hot core ionizes the gas, causing it to glow.

This nebula was observed by the European Southern Observatory’s Very Large Telescope in Chile. This is the best view of this particular planetary nebula, but the Hubble has taken some gorgeous shots of other planetary nebulae throughout the galaxy. Researchers estimate that there are 10,000 of these star ghosts strewn about the Milky Way.

Planetary nebulae have nothing to do with planets. They were just named that after they were first observed in the 1700s. Astronomer William Herschel thought they were round like planets, and the name stuck.

This phase of a star’s death only lasts for a small amount of time, maybe 20,000 years, which is a blink of an eye in astronomical time scales. Our sun is about the right size to form a planetary nebula when it starts dying. Lucky for us, that won’t be for a few billion years.