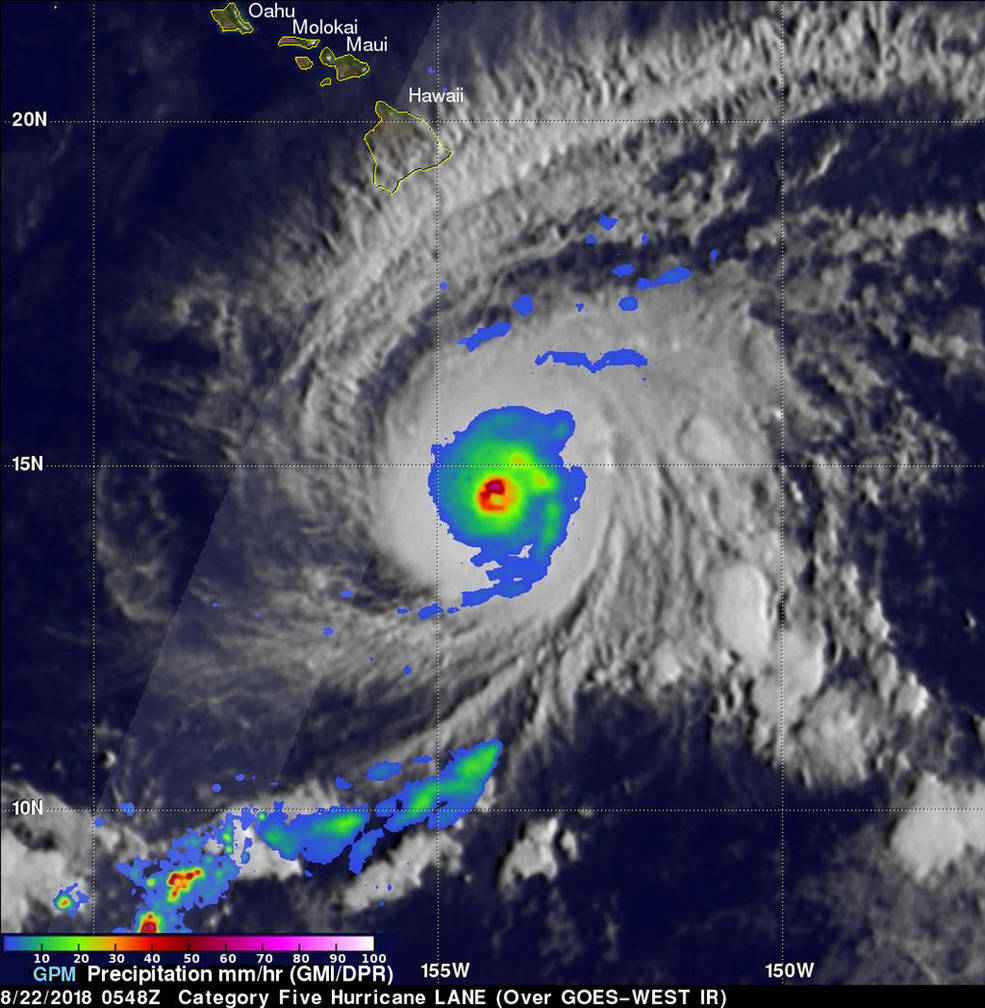 Lane, currently a category 4 hurricane, is heading for Hawaii. The hurricane is forecast to approach the main islands starting on Thursday. It’s a dangerous situation for people in its path, and also an incredibly rare event. It was recently downgraded from category 5 status with wind speeds of 160 miles per hour. As the Honolulu office of the National Weather Service pointed out on Twitter Lane is one of two category 5 hurricanes to pass within 350 miles of the islands since records started being kept.

“It’s pretty rare to even get a category five hurricane in the Central Pacific.” Brian McNoldy, a meteorologist at University of Miami who studies tropical cyclones says. “The records there aren’t great, but as far as we know, there’s only been five before this. And of those five, none have been this close to Hawaii. It’s definitely a bit nerve wracking to see it there”

Category 5 storms have the highest wind speeds of any hurricane, with the potential to cause catastrophic damage when they make landfall. They’re rare occurrences on their own, but being on a path towards Hawaii makes it even more unique. Here’s why.

The Pacific is the largest ocean basin on Earth, with plenty of room for tropical cyclones to roam. By comparison, the Hawaiian islands are a tiny target, covering 10,931 square miles total. That land mass is spread over six main islands, making landfall on any of them less likely.

“You’re a pretty small spot in a large ocean, and to have something hit you takes a bit of an unfortunate alignment of things.” McNoldy says.

Compare that to Florida, which covers 65,755 square miles, and is part of the Eastern seaboard of North America, which in itself offers an even larger, vastly easier-to-hit target for Atlantic Hurricanes.

Where the winds blow

Hurricanes that have any hope of reaching Hawaii tend to form off the West Coast of Mexico, where waters are warm enough to fuel the growth of thunderstorms into full-blown tropical cyclones. If their swiftly-rotating winds reach above 75 miles per hour, these storms are categorized as hurricanes in the eastern Pacific. (In the Western Pacific these storms are called typhoons, and in the Indian Ocean they’re called Cyclones. It’s all the same kind of storm.)

The storms form and head into the Central Pacific, but usually when they get near Hawaii they start to detour, heading West across the basin thanks to an atmospheric wind pattern that helps shift the path of incoming storms.

“The major reason that Hawaii doesn’t normally get major hurricanes nearby is that there’s a strong subtropical high-pressure system that sits just to the north, and that acts to steer [storms] straight west.” McNoldy says.

Unfortunately for Hawaii, right now that system isn’t doing what it normally does. “For the last 1-2 months that high pressure is a little weaker than normal and it’s a little farther west than normal.” McNoldy says.

That change in weather patterns opens up the opportunity for major hurricanes like Lane, and Hector, which passed south of the islands earlier this month to get uncomfortably close.

McNoldy says that the waters around Hawaii are warm enough to support a hurricane, but this season the waters are warmer than average, adding fuel to Lane’s fury.

“The water temperatures are certainly not a limitation” McNoldy says. The warmer than usual sea surface temperatures can add to the strength of a storm.

It’s not quite as warm as it would be during an El Niño year, but the conditions for a large storm developing and being sustained are even better than normal.

While hurricanes don’t often hit Hawaii, landfalls do sometimes happen. The last hurricane whose center made landfall on the islands was Hurricane Iniki, which made landfall on Kauai in 1992, killing six and causing $1.8 billion in damage. According to Ars Technica besides Iniki, only two other storms have made direct landfall; Hurricane Dot in 1959 and an unnamed storm in 1871.

Iselle made landfall in 2014, but had already weakened to a tropical storm when it hit. The named storm still managed to cause over $50 million in damage to the papaya industry alone.

There have been many other close calls, including Hurricane Iwa in 1982, which whipped Kauai and Oahu with damaging winds as it passed north of the archipeligo.

“Hawaii rarely gets hurricanes so when they do its really big deal, because they’re not really built for it,” McNoldy says. He’s based in Florida, where hurricanes are an expected hazard, and where the population and buildings are prepared for storms—even large ones. Hawaii does not have the same level of preparation for this particular hazard.

The storm is likely to slow and weaken slightly as it continues on its path towards the islands, but even if it doesn’t make a direct landfall (which happens when the center of the storm passes over land) this is expected to be an extremely destructive storm. Areas will have to contend with storm surge, flash floods from heavy rains, and high winds. Unfortunately, the storm’s forecasted track will bring Lane close enough to all the islands to do some serious damage.

“All of the Hawaiian islands are at great risk right now,” McNoldy says. “This is going to be huge.”