One researcher argues we need to figure out how they stay well. 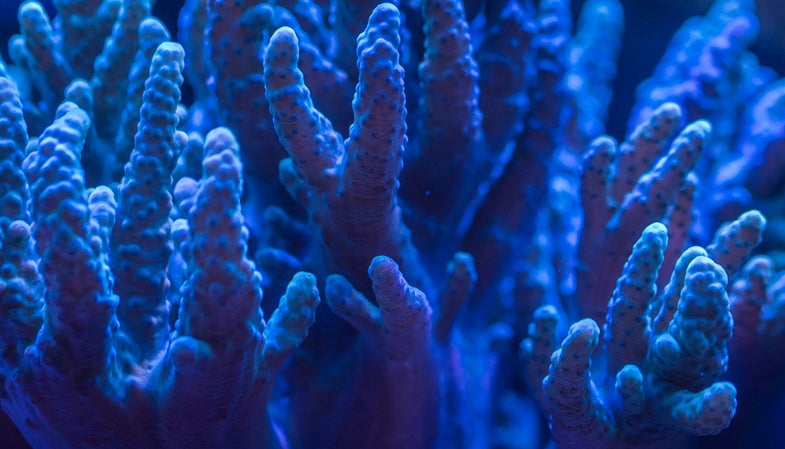 There are lots of headlines out there about massive bleaching events destroying the world’s coral reefs. Millions of dollars are spent annually toward conservation and restoration efforts for those imperiled reefs, which have huge impacts on ocean health as well as the health of the human communities that rely on them. But a new paper from a coral expert suggests that researchers need to pay more attention to what keeps corals healthy—not just what makes them sick.

This paper, which surveys existing ways of looking at coral illness, makes the case that researchers and conservationists should strive to better understand how coral’s immune system works. Coral reefs aren’t just one being: within a single reef are thousands and millions of coral animals, each of which has its own body and ability to survive. Although the coral is the biggest and most obvious part of a reef, it isn’t the only part that keeps it alive and healthy.

In fact, the death of the coral polyps may only be a side effect of the mass bleaching events. Their cause is related to the absence of algae with which the polyps have a mutualistic—what would once have been called symbiotic—relationship. Is it the absence of the algae or the death of the polyps that causes the mass bleaching event? Or what about an imbalance in the bacteria, algae, and other organisms that are all instrumental parts of the coral “holobiont?”

How instrumental? Well, Caroline Palmer, the author of the paper and a longtime coral immunity researcher, says nobody really knows. And without that knowledge, she asks in the paper, how is it possible to make predictions about future reef health?

Palmer is currently a visiting research fellow at the University of Plymouth, but she’s been studying coral immunity both inside academia and as an independent researcher. “I was always sort of perplexed about why we weren’t thinking about what makes coral healthy,” she says, instead of studying the things that make them sick, like ocean acidification and rising temperatures.

What makes them healthy? Well, it’s still poorly understood, though coral immunity as a field has been around for over a decade. From an immune perspective, the coral animals might not even be the key ingredient.

“You can’t have a healthy coral unless it is in balance with these microbes [and] these organisms that have to live with it,” she says. “If there’s a breakdown in any of those relationships with bacteria or the algae—or things that we don’t even know about yet—then the holobiont, so the coral reef and its associates, won’t be healthy and won’t be able to produce a reef or contribute to a reef.”

Think of each coral holobiont as a hotel, and the immune system as the front desk. That front desk has to admit the bacteria, algae, and other organisms that are the guests, cleaners, and staff of the hotel, but not allow in anything that will hurt the holobiont. Some holobionts have more competent front desk staff, which gives them higher immunity. But which organism is the one that sits at the front desk isn’t yet known, Palmer says, and it’s different for different cases.

So she proposes a model for looking at coral reefs that looks beyond the coral animal and considers the whole holobiont, front desk staff and all. Understanding the roles each organism plays is key to understanding how different reefs will respond to crisis situations.

Of course, this paper is just the beginning: Palner says she wanted to “start a discussion” among coral researchers and conservationists. University of Texas at Arlington coral immunity researcher Laura Mydlarz, who has collaborated with Palmer in the past but is not involved with the current paper, says that the community of coral immunity scholars has been hoping to see a shift in conservation like this. “I hope it leads to a lot more addressing of this hypothesis,” she says.