The latest climate assessment isn’t surprising, but it still sucks

If only we could just study for a better grade. 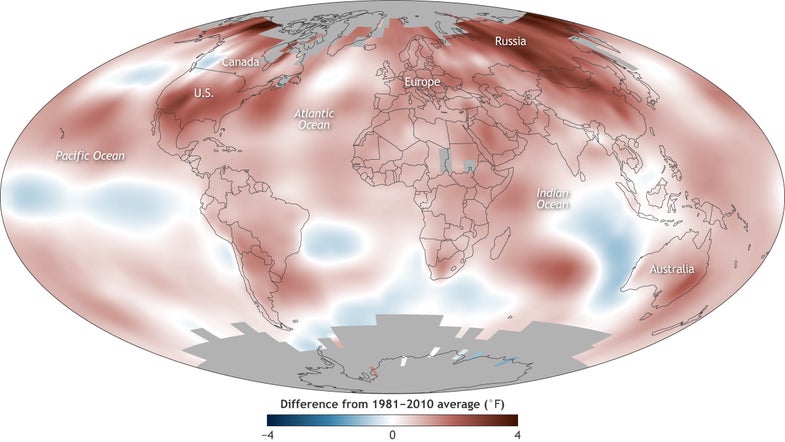 For the past 28 years, an international group of climate scientists has made an annual assessment of the State of the Climate. They look at global temperatures, greenhouse gas levels, sea level rise, sea surface temperatures, droughts, heat waves, storms, and climate patterns to figure out how this vast amalgamation of data collected from all over the world fits together.

This week, NOAA released the State of the Climate report for 2017 in the Bulletin of the American Meteorological Society. The results—while not surprising—are distressing.

Last year didn’t quite make the cut as the hottest year on record. That dubious honor belongs to 2016, which still tops the charts. Still, 2017 is right up there, in contention with 2015 for second place, and does rank the highest in one regard: it’s the hottest year on record that didn’t also feature a warming boost from the climate pattern El Niño. The fact that the last three years are all in positions to medal in the hottest-year Olympics is alarming, and consistent with the upward trend we’ve been observing for years. All of the 10 warmest years on record have occurred since 1998, and the four warmest years have occurred since 2014.

Temperatures are rising because of increasing levels of greenhouse gases in our atmosphere. In the new report, researchers found that in 2017 greenhouse gases reached record levels. The average level of carbon dioxide in the atmosphere hit an all-time high of 405 parts per million. According to NOAA that is higher than any average in the 38 years since we’ve been taking modern measurements, and higher than anything detected in the 800,000-year ice core record.

Speaking of ice, all that heat is not good for the masses of frozen water that still manage to persist on the Earth’s surface. Both the Arctic and the Antarctic hit record-lows in sea ice coverage. The Arctic saw the lowest maximum sea ice coverage ever recorded, and in the Antarctic, the sea ice coverage hit its lowest daily value ever recorded on March 1. Meanwhile, on land, glaciers continued to shrink at an accelerated rate. Since 1980, glaciers have shrunk dramatically: the report describes the loss as equivalent to “cutting a 72-foot-thick slice off the top of an average glacier.”

If water isn’t bound up in ice, it’s in the atmosphere as water vapor, or it’s melted and added to the surface waters that cover much of the globe. As the world’s ice reserves melt, sea level rise is increasing at a rate of about 1.2 inches per decade. In 2017, sea levels hit a record high—three inches above 1993 levels.

In addition to encroaching onto land, the sea was reaching for other records as well. Sea surface temperatures were high, again coming in second only to 2016. The high temperatures contributed to a third year of coral bleaching, which researchers described as “unprecedented.”

These general trends were also accompanied by extreme events around the world, including storms, fires, and above-average local temperatures.

This year isn’t likely to be much better. This summer has been defined by heatwaves and infernos around the world, and experts expect that it will end up being the fourth warmest year on record once they can analyze all the data. We’ll have to wait and see how the rest of the year plays out, but if things keep going as they are, the future is looking uncomfortably hot.