This magnetic robot arm was inspired by octopus tentacles 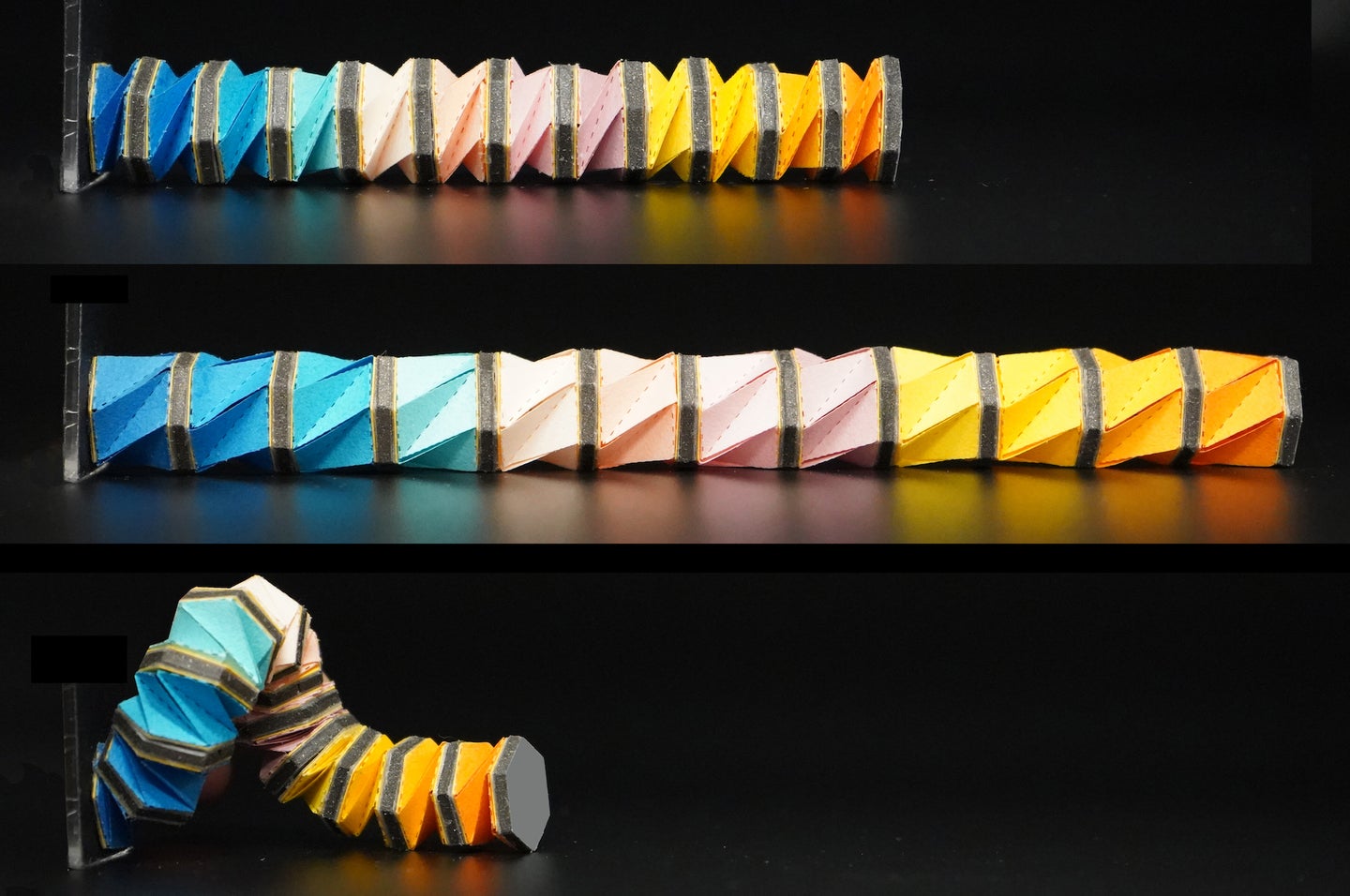 In its collapsed form, this robot arm looks like a tiny concertina, an accordion-like musical instrument that can expand and fold into itself. Unlike a concertina, this arm cannot make melodies, but what it can do is unfurl and undulate in delicate—and potentially useful—ways.

This design, described in detail in a new study out Monday in the journal PNAS, is inspired by the octopus arm, and mimics how it stretches, twists, and manipulates objects. Its creators hope that it can be integrated in biomedical applications, where it can assist in minimally invasive procedures or operations, like inserting a breathing tube from the mouth into the windpipes or inserting a catheter.

“With the octopus, its nervous system is actually located in its arms. What we’re doing here is mimicking a highly intelligent arm system,” says Ruike Renee Zhao, an assistant professor of mechanical engineering at Stanford University, and an author on the new paper. “Because its arm is so versatile it could have hundreds, thousands of different motions to interact with objects.”

The new robotic arm owes its flexibility to a few key features, including movements powered by a magnetic field rather than motors, origami-inspired panels, and a soft exoskeleton.

A string of tiny segments comprise a single arm. Within each segment, two hexagonal soft silicon plates embedded with magnetic particles sandwich tilted plastic panels designed with a kresling origami pattern, a style of origami that twists to lengthen and contract. The shape of the panels enable the arm to either extend into a tube, or shrink into its compressed configuration.

Because of the magnetized plates throughout the robotic arm, it can be remotely operated using a strong magnetic field, kind of like ones created inside an MRI scanner. During the testing stages, researchers used electromagnetic coils to create a three-dimensional magnetic field around the arm. By adjusting the direction of the magnetic field around the arm, they could create torque to drive the motion and deformation of the individual origami units. The design also allowed researchers to control each segment of the arm independently to fine-tune the movements.

“Through controlling the external magnetic field, it can have the stretching behavior, bending behavior, and the combination of stretch and bending,” Zhao says. “We could control the point where it starts to bend.”

It’s possible to customize everything in the arm from the strength of magnetization, to size, to the materials that it’s made of, to how many units it’s composed of.

In a conventional robotic arm, engineers need to program a driving force for each direction (along the x-axis, y-axis, or z-axis) it wants the arm to move in. These forces are usually powered by motors. This means that for the arm to have a greater range of motions, it would need a lot more motors.

But since Zhao and her team are using magnetic material with an external magnetic actuator—kind of like a remote control—they just need to apply one field to power a wide range of motions in any direction.

“If we think about the conventional robotic system, for toys for kids or cars, they always have motors directly embedded in the robotics system itself. The disadvantage of that is that you would make the whole system very large because you will need space for the motor and the control unit,” Zhao says. However, when the robotic actuation is field-controlled, the driving force becomes separate from the robotic arm itself. “That allows us to minimize the size of the whole system.”

In some ways, the octo-arm trades strength for nimbleness; it can still lift objects, but can’t beat a metal arm fitted with joints and pistons. “In the biomedical field, the key is not to lift very heavy weights, the most important point is to accurately control the manipulation of objects,” says Zhao. “In human bodies, we don’t have an iron ball inside, we don’t need to deal with very heavy things. What we need is a clever way to navigate through different passages.”