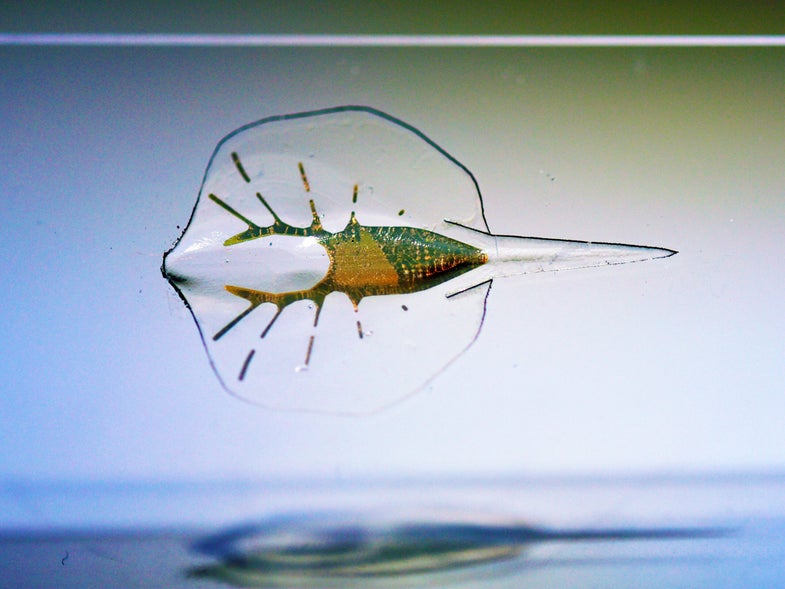 Nature-inspired robotics is a hot field these days. We’ve reported on robots designed to mimic cockroaches, salamanders, cheetahs, sea snakes, among others. Basically, if it’s alive, somebody out there is trying to make a robot version. So a robot inspired by a stingray might sound like more of the same. Not so.

This tiny swimming robot, created by researchers at Harvard University’s Department of Bioengineering and Applied Sciences, is powered by rat muscle cells, making it a biohybrid machine–part robot, part biological tissue. Previous “bio-bot” projects have used biological actuators to produce movement. But the biorobotic stingray, developed by an international and interdisciplinary team of scientists, has pushed the field forward with a complex propulsion mechanism triggered by light, which allows the bio-bot to be steered around obstacles. And that’s just the beginning of what makes this robo-stingray special.

“Really what we’re doing is using tools from robotics to understand the heart,” Harvard professor Kit Parker told Popular Science. Parker is a cardiac physiologist, and he’s the guy who dreamed up this ambitious project. In the long term, his goal is to use the technology behind the robotic stingray to construct an entire human heart for kids with heart disease.

Parker’s moment of inspiration struck at the New England Aquarium, when his daughter reached out to pet a ray, and it swam away. He went straight to a postdoctoral fellow in his Disease Biophysics Group, named Sung-Jin Park, and told him his plan. “I said: we’re going to build a ray, we’re going to build it out of a rat, and we’re going to make it light-guided,” Parker says. “The look on his face was both horror and sorrow; horror that I thought this could work, and sorrow that he’d bet his whole career on me as a mentor.”

It took him a year, but he eventually convinced Park to do it. “He’s my dream maker,” Parker says.

Stingrays swim with a technique much admired by scientists and engineers alike. A few years back, we wrote about how the stingray’s movement was analyzed for the purpose of designing a better submersible. The secret to their swimming talent is their flat, round shape, the undulating movement of their pectoral fins, and a force they generate called the “leading-edge vortex,” the same force that gives birds their thrust.

In order to emulate this complex motion, Parker’s interdisciplinary team had to bring together an array of technologies and materials. Or as Parker puts it, “It’s made from a pinch of rat, a pinch of breast implant, and a pinch of gold.”

And he’s not kidding.

They started the construction of the robo-ray’s body with a layer of transparent elastic polymer–the aforementioned “breast implant.” Then they genetically encoded rat heart cells to respond to flashes of blue light, and aligned the cells along the ray’s “fins” in a serpentine pattern. These muscles would allow the fins to flex downward, but to ensure they would return to the starting position, the team reverse-engineered a stingray’s physiology to create a skeleton made of gold. Because, Parker says, “Cells like gold, just like people do.” A final layer of polymer, and the biohybrid stingray was complete. At just 16 millimeters long, and weighing just ten grams, the tiny robot looked a little like a transparent coin with a tail.

They placed the tiny bio-bot into a saline solution filled with sugar to feed the rat cells and zapped it with pulses of blue light. The rat muscles contracted sequentially along the serpentine pattern, causing a ripple effect mimicking the swimming motion of a live stingray. And most importantly, it propelled the robot forward. By hitting it with asymmetric pulses, the researchers were able to steer it around obstacles.

Parker credits Sung-Jin Park with the bulk of the work on the project, and for going along with his crazy idea. “I’m getting a lot of mileage out of saying ‘I told you so.'”

The biggest advance, as Parker sees it, is that the cells in the robo-ray act as both the actuator and the sensor, a big step toward his goal to build an entire heart. But others who worked on the project may see it differently, he says, and that’s the beauty of this kind of transdisciplinary science.

“If you have four people looking at a piece of art, they each come up with a different interpretation of it. It’s the same way with this science,” he says. “The cardiac biologist sees the implications for how the heart’s built; the marine biologist sees the implications for how the stingray moves; and the robotics engineer sees the way you can use cells as a building material.”

And the rest of us may just see an incredible, even beautiful, emulation of nature. A little rat, a touch of breast implant, a sprinkle of gold–somehow it all adds up to bio-robotic magic.