Under The Right Conditions Our Sun Could Produce An Enormous Superflare

It's the end of the world as we know it 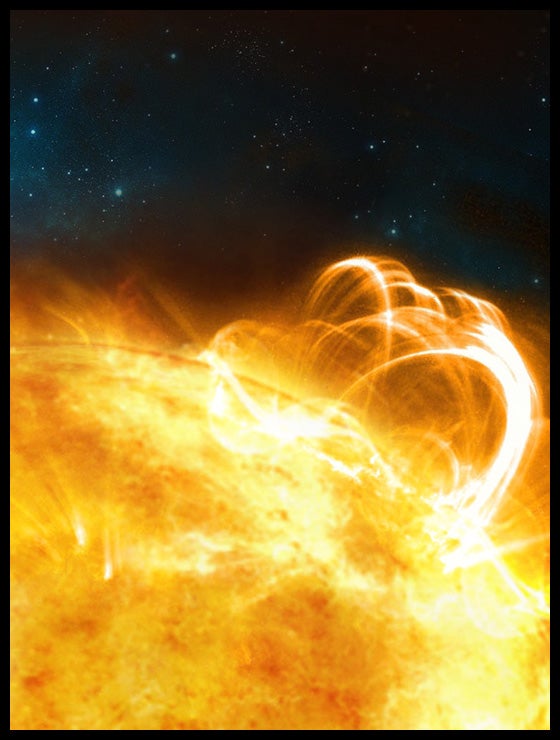 Solar flares are gorgeous, but the delicate fiery loops that we’ve observed during humanity’s brief study of the sun are nothing compared to what other, similar stars are up to.

In a recent paper, researchers detail their observations of ‘superflares’ on a binary star in our galaxy named KIC 9655129. These superflares are huge solar flares that are much larger than any that we’ve observed coming off our own sun.

But even though they differ in terms of magnitude, (a superflare might give off the energy of a billion-megaton bomb while our sun’s solar flares reach a piddling 100 million megaton-bomb) researchers discovered that the underlying processes that drive the superflares on other stars is the same basic engine that drives solar flares on our own stars–periodic oscillations of magnetically charged plasma within the interior of the sun. So, could it happen here? Maybe. But if it did, the results would be very bad.

“If the Sun were to produce a superflare it would be disastrous for life on Earth; our GPS and radio communication systems could be severely disrupted and there could be large scale power blackouts as a result of strong electrical currents being induced in power grids,” lead author of the paper, Chloë Pugh, said in a statement.

But stop your panicked screenplay writing. According to Pugh, “[T]he conditions needed for a superflare are extremely unlikely to occur on the Sun, based on previous observations of solar activity.”

And if the sun did ever produce a superflare, or just a really large regular flare, we’d at least have a little bit of warning that it’s headed our way. New forecasting techniques for solar weather combined with better observational equipment like the DSCOVR satellite means that even if the worst is on its way, we can still try to get ready for it.