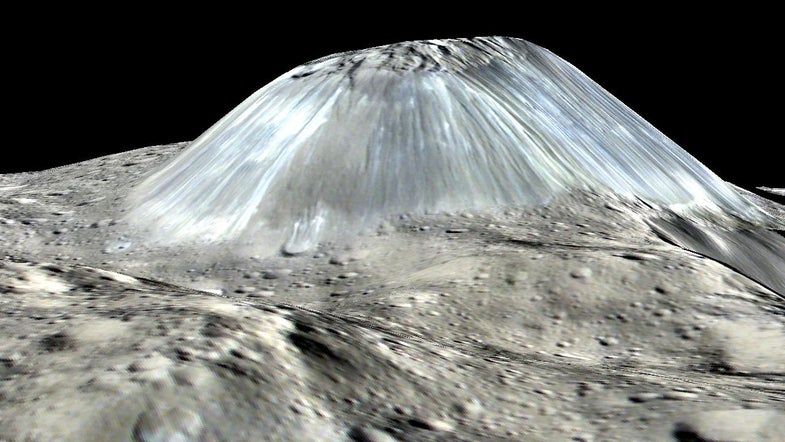 At 2.5 miles tall, Ahuna Mons sticks out like a sore thumb on Ceres. The ice volcano is by far the biggest thing on the dwarf planet, and there are no runners-up. It’s Ceres’ only ice volcano, and that’s weird because, like legs, ants, and celebrity deaths, volcanoes usually don’t occur alone. Now scientists think they may know why: the other cryovolcanoes were destroyed.

Millions of years ago, Ceres may have had loads of these cryomagma-spewing mountains. But according to a new explanation, the cryovolcanoes flattened out over time. Not due to erosion, like Earth’s mountains and volcanoes, but because they oozed out of shape.

Given enough time, solid objects can flow. This is called viscous relaxation. Rocky volcanoes are too viscous to flow under normal conditions, but water ice can relax and change shape without melting. This is how Earth’s glaciers move around. On Ceres, which is composed largely of water ice, the whole surface can flow.

This process might reshape the surfaces of other icy worlds, too, such as Titan, Triton, Europa, and Enceladus. But it’s likely particularly pronounced on Ceres, which is the icy body closest to the sun.

“Heat has a lot to do with it,” says study author Michael Sori. “It’s like if you put a jar of honey in the microwave, the honey flows much faster than it does at room temperature.”

Sori and his colleagues’ models suggest that viscous relaxation may take millions or hundreds of millions of years. There aren’t a lot of other active processes on Ceres, which has no atmosphere and no tectonic movements, so no other explanation really makes sense at the moment.

The team suspects Ahuna Mons, being a youthful 200 million-year-old cryovolcano, hasn’t yet had enough time for viscous relaxation to flatten it out.

Now the researchers are searching for other potentially deformed cyrovolcanoes, and they already have a suspect. Underlying Ahuna Mons is a flatter domed feature that may be an ice volcano that gradually flattened out over about 500 million years. So maybe Ahuna Mons isn’t so lonely after all.