Now to figure out where to land… 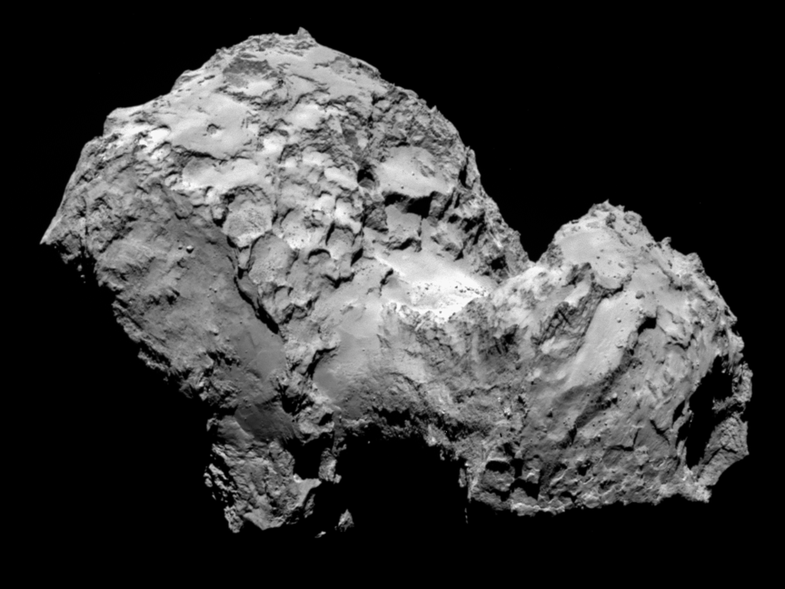 Are you ready for your closeup, Comet 67P?

After a 10-year journey, the Rosetta spacecraft finally reached its destination this morning. Launched by the European Space Agency in 2004, the spacecraft has traveled across four billion(!) miles to a comet named “67P/Churyumov-Gerasimenko.” Now both objects are circling the Sun somewhere between the orbits of Mars and Jupiter, traveling at 34,000 miles per hour.

Rosetta will be the first spacecraft to orbit a comet, and if all goes according to plan, later this year the spacecraft will also be the first to land a probe on the comet’s surface.

For the next several months, Rosetta will fly around around Comet 67P, mapping its terrain and magnetic field, while trying to find a safe place to drop the 220-pound lander that it’s carrying. The landing may prove to be a tricky one, as Rosetta’s approach revealed the comet’s extremely weird shape; it looks as if two large rocks fused together in the shape of a rubber duck or a boot.

The three-legged lander, named Philae, is scheduled to touch down on the comet’s surface in November. The 2.5-mile-wide comet doesn’t have a strong gravitational field, so Philae will have to harpoon itself to the surface to avoid drifting away and becoming space junk. Once in place, Philae’s drill bit will allow it to take samples from eight inches below the surface, and various other instruments will investigate the comet’s composition and internal structure. It’ll also be taking photos along the way (which we at Popular Science are particularly looking forward to).

Together, the orbiter and the lander will study 67P for a year while the comet’s elliptical orbit brings it nearer to the Sun. As it approaches, gaseous material in the comet’s surface will boil off and create dust trails. Scientists hope that studying 67P and its vapors will help to reveal whether comets might have brought water – or even the building blocks of life – to Earth.

“The reason we look at comets is that they were there right at the beginning,” Matt Taylor, a Rosetta project scientist, told the Guardian. “Learning about them gives us an idea of where Earth came from and where the whole solar system came from, what that primordial material at the beginning of the solar system was made up of.”