Star Trek, James Bond, and the trip from science fiction to science fact 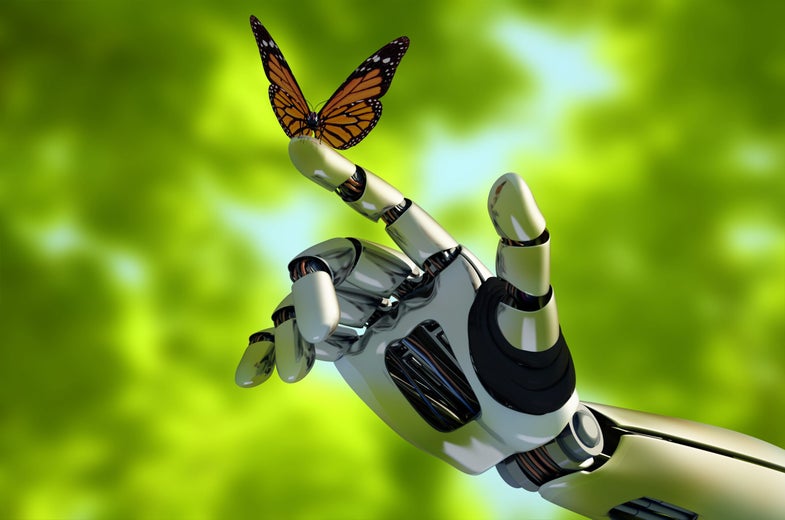 The following is an excerpt adapted from The Edumacation Book: Amazing Cocktail-Party Science to Impress Your Friends by Andy McElfresh.

Here’s my misspent youth: I spent many, many hours in a camping hammock behind my parents’ house devouring the Science Fiction Hall of Fame series, everything by Arthur C. Clarke, many things by Robert Heinlein, the complete works of Philip K. Dick, and especially issues of the short-lived Galileo magazine. I also read Asimov’s Science Fiction magazine, which was a lot like Alfred Hitchcock’s Suspense Magazine, but with ray guns and the peculiar feature of having a different photo of Isaac Asimov in the upper left corner on each issue. One photo was of Asimov’s feet.

I got into sci-fi when I was a young teenager. That’s when I really started pouring on the steam as a competitive swimmer and a member of a barbershop quartet, which meant I had a lot of free time to read all the way through high school while other young men were spending all those tedious hours exchanging bodily fluids and viruses with young women (or each other). I was filling my head with possible futures, then thinking about them (or singing the baritone parts to one-hundred-year-old songs) for six hours a day in the pool. I never grew taller than 5-foot-6, which ruined my chances of becoming a world-class swimmer, and I never was able to grow a handlebar moustache, which ruined my chances of becoming a professional barbershop quartet singer. (So, thank God.)

I was super into gear, and dreamed of possessing impossible inventions, like I was Miniver Cheevy longing for the Medici gold. A chronosynclastic infundibulum that you could activate under your arm, which would serve as a holster for whatever you wanted to carry and was completely undetectable to anyone in the universe? I wanted. A portal projector that would allow you to walk through any wall, could teleport you anywhere, and somehow regulated the difference in temperature and air pressure? On my wish list. A watch that you could set to go back and undo all of the embarrassing moments in your life? I still want that. In fact, if the Devil is reading this, write my publisher for my email and we can make a deal.

Of course, the coolest stuff came in the dumbest stories. Bad science fiction is defined by constant stops and starts so they can explain the gear. “Tyrone Xandar pulled out his X251 Stratoblaster—a plasma energy pistol so powerful it could melt the metallic fur of a Denebian magmabeast”—stuff like that. Really takes you out of the story.

But there were so many things in fiction, movies, and TV shows that people just took for granted. Cool stuff that was part of their world of the future. Keep in mind that I was a little kid in the 1970s, when everyone thought that polyester clothing and digital watches were pretty awesome. I mean, if you didn’t have to know what the hell the big hand was doing while simultaneously generating projectile BO from the pits of your tight plastic football jersey, it meant the future was something we controlled.

Most of the 1970s, from the Carter administration to The Love Boat, did not work out. But don’t forget that there was a little thing called Star Wars that came along somewhere in there, and it carried on the tradition of using science fiction to tell stories that could have happened to anyone, in a future that had some pretty cool shit.

Food replicator. Universal translator. Tablet computers. Tractor beam. Star Trek was full of firsts when it debuted in the fall of 1966. There is so much wonderful optimism built into the premise of that show, from the Prime Directive (which was broken as many times as it was brought up) to the multicultural Team Benetton–in–space casting (ignore the accents, please) to even featuring the first interracial kiss on US television (though aliens used mind control on Kirk and Uhura to make it happen under protest). And Kirk got so much alien na-na that you know Bones had a special space-penicillin hypospray vial set aside for daily use.

And Star Trek was full of predictions, too, although I’m not sure how far they explored them as concepts. For example, they had a food replicator, from which crew and guests would request such exotic menu items as soup or Earl Grey tea. Give me a food replicator, it’s gonna be surf-and-turf from the Palm with frozen gold-leaf truffle from the Savoy. But in the future, I guess people want to appear humble when talking to a food replicator. Nowadays, there are several versions of food replicators, the most recent being a pizza printer that will work as a vending machine and that NASA is re-outfitting for the International Space Station.

The universal translator was first introduced on Star Trek. It could take any language—even telepathy—and turn it into mid-Atlantic droning with heavy reverb. And you know that disembodied brains are thinking things like “Fifty quatloos on the newcomer,” because even though they completely consist of brain tissue, they twitch around a little bit when they think. Nowadays, we have several translators, the most interesting of which are small handheld units developed by a number of Native American tribes to preserve their dying native tongues. However, Google Translate isn’t there yet. I took the phrase “Is this my favorite puppy I see before me?” and translated it first into Pashto, then Basque, then Sindhi, then Amharic, then back into English, and I got “I was the doll I liked before I saw it before.” It may not be as confusing and bizarre as the translation in Arrival, but Google definitely has some work to do.

Plenty of other cool ideas came out of the Star Trek canon, but we’ll finish up with the holodeck, which was first seen on the 1970s Star Trek animated series but didn’t really enter nerd consciousness until Star Trek: The Next Generation. I always thought the holodeck was both underutilized and not fully thought out, but they had other things to worry about, like constantly letting out Number One’s uniform and the strange sadness Denise Crosby seemed to bring to her role. Why didn’t they use the holodeck as a real-time, planet-to-planet communicator that would make you feel like you were talking to someone in person? No more space leave! What happens on the holodeck stays on the holodeck! Anyway, VR goggles are like the holodeck, according to VR goggle manufacturers, so let’s move on.

We all know a guy who says that From Russia with Love is the best James Bond movie because it didn’t have a ton of unbelievable gadgets, just a briefcase with a choke wire and some gold sovereigns. That, of course, is a stupid opinion to hold. For one, it is one of the best James Bond movies because Quint from Jaws has blonde hair and kills James Bond–lookalikes for fun like he’s in The Most Dangerous Game. And for two, the gadgets from the Bond movies are super-awesome!

Author Ian Fleming was legit when it came to the spy business. He worked as an intelligence officer for British Naval Intelligence, most notably on Operation Goldeneye, which is where he got the book title and the name of his estate in Jamaica. He probably named the operation, since he was a bird lover and the Goldeneye is a bird. Want more evidence? The author’s name of his favorite bird guidebooks was James F%@$ing Bond [f%@$ing mine].

Fleming knew his stuff when it came to gadgets. Real stuff they had at his time in intelligence included tie-clip cameras (more astonishing is the fact that people wore tie clips), hollow teeth containing cyanide (actually, a Soviet invention), and the microdot, which anybody could make with an ordinary 35mm camera because it was just an incredibly tiny negative—a picture of a picture.

What imaginative bits of Bondiana have survived and flourished as real equipment? How about the exosuit, from the brewery scene in Goldfinger? Or the jetpack from Thunderball, which—while it was wired to a helicopter in the movie—was an actual prototype capable of 30 seconds of flight (working on The Awesome Show, I got to see a demo of the Zapata Flyboard Air that can stay aloft for 30 minutes). The fingerprint scanner in Diamonds Are Forever is now available on your iPhone, though it might be the most easily hacked security measure in history. And let’s not forget the homing beacon also from Goldfinger: Do you have a Tile connected to your keyring yet?

When it comes to fantastic gadgets, however, no Fleming story does it better than Chitty Chitty Bang Bang. That damned car—in addition to tolerating those obnoxious children—was also a boat, a flying car that could hover, was remote controlled and self-driving, and even seemed to have its own artificial intelligence—all characteristics we see in today’s most cutting-edge cars. However, for all that foresight, Fleming never put in any drink holders.

This excerpt was adapted from The Edumacation Book: Amazing Cocktail-Party Science to Impress Your Friends by Andy McElfresh, on sale March 20, 2018.