This ‘Hole’ On The Surface Of The Sun Looks Amazing

But what caused it?

Everyone knows not to look directly at the sun. It’s dangerous, and besides, that’s what we have NASA’s Solar Dynamics Observatory (SDO) for.

The SDO is a spacecraft that scientists use to study and monitor space weather, keeping a particular eye out for changes in the solar wind, which streams away from the sun, occasionally carrying magnetic fields that can disrupt communications or satellites near Earth.

Earlier this month, NASA spotted a huge coronal hole in the sun, and captured these gorgeous images over the course of two days from May 17 to May 19.

Coronal holes are areas where the Sun’s corona (the Sun’s atmosphere) is less dense, and has a lower temperature than the rest of the corona. These areas tend to send out the fastest solar winds. A coronal hole can’t be seen in visible light, but it can be spotted by observing ultraviolet light. In this case, the researchers have colored the ultraviolet light purple so that we can see it. 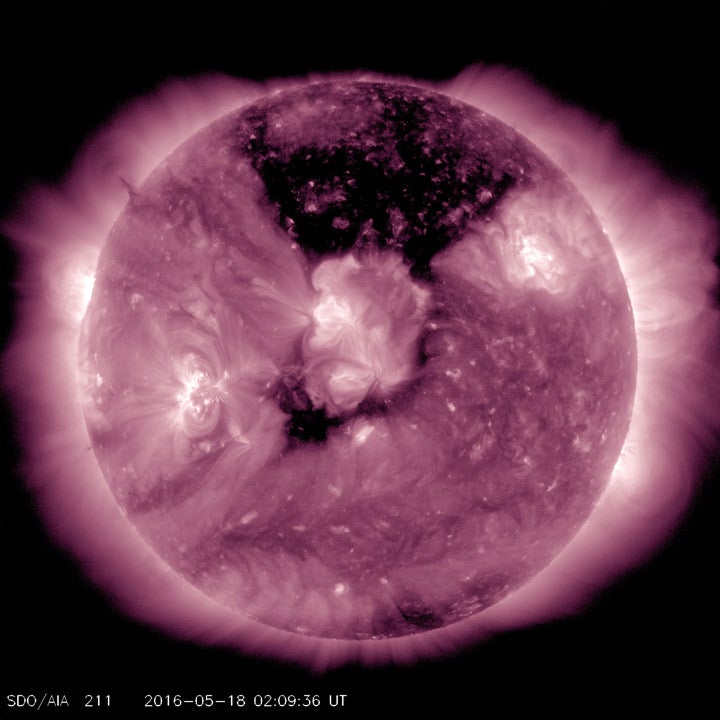 Even in a still picture, the size of the coronal hole is impressive.

There are huge holes in our knowledge of coronal holes. At present, researchers aren’t even sure how they form. Coronal holes aren’t particularly rare, but they do look magnificent. Take a look at another coronal hole spotted earlier this March: